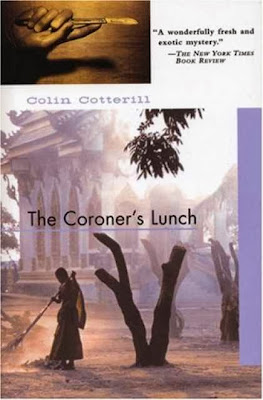 I mentioned a while back that my friends Ruairí and Martine have moved to Laos, and that Ruairí and his teddy Alfred are blogging the experience.

There are lots of fun literary inclusions, such as Ruairí's The Ballad of Hua Lo Prison (aka Hanoi Hilton):

The Ballad of Hua Lo Prison (aka Hanoi Hilton)

The Hanoi Hilton has a special place
In writings on the war in Vietnam
Which John McCain did with his presence grace
Along with other guests from Uncle Sam.

And their accounts did tell -I'm sure you know -
Of hunger, fear and torturers most cruel.
And so I went to see this Hua Lo
And find out if these tales were really true,

But now the scales have lifted from my eyes
For suffering was not these prisoners' fate,
And I - along with you - can but surmise
That life in prison here was truly great!

And as for food! They fed them up like kings
(I know because the film says it's true);
While Viet Cong peasants starved on mouldy rice
They gorged on chicken, bread and hot beef stew.

They played guitar, they played at cards and stuff,
Their team at volleyball was much the best.
And if perchance a pilot should feel rough
A doctor came and listened to his chest.

At Christmas they were made to feel at home
With decorations hung upon a tree.
And Ho Chi Minh sent them a Christmas poem
And warders came with flutes and played with glee.

And as went by the years, the months, the days,
And seeing that their captors were so kind,
They came to see the error of their ways
And wondered why America was blind.

And when they left they rued the awful day,
Instead of smiles their aspects were of woe;
For if they could, they would have liked to stay
With their friends and bosom pals in Hua Lo.

And the wonderful observation en route to Vietnam's ancient capital:

Personally, I found the idea of Fifty Shades of Grey being on sale here far more upsetting than the dogs being fattened up but maybe that's just me. (Alfred: Yes, it's just you.)

Still, the part that intrigued me most was the discovery of a crime novel set in Laos: The Coroner's Lunch by Colin Cotterill (who has one of the most awesome websites I've seen in a long time). Not an easy book to find at a sensible price, but persistence paid off and I've ordered a copy. Hoping to visit Ruairí and Martine later in the year, so I'm expecting a sort of Death in Paradise prelude. I shall report back.
at 14:36