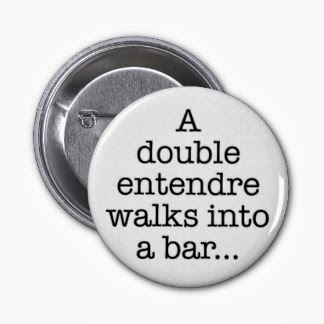 This is the kind of silly thing writers lose sleep over:

John: Time to make myself extremely unpopular with the neighbours again! Grinding out my pointing!

To which I replied:

Me: Hope you're not grinding out your pointing in public, cous. Don't know about complain, you could get arrested for that!

To which he said:

John: There are no euphemisms being used at this time Maz!

To which I was about to reply, but didn't:

Me: Euphemisms or double entendres?

To which I then found myself trying to answer my own question.

Just for those who aren't sure (thanks to Google's 'define' function):

Noun: A mild or indirect word or expression for one too harsh or blunt when referring to something unpleasant or embarrassing.

Noun: A word or phrase open to two interpretations, one of which is usually risqué or indecent. Humor using such words or phrases.

But then, doesn't that make this form of double entendra a pun?

Noun: A joke exploiting the different possible meanings of a word or the fact that there are words which sound alike but have different meanings.

It was about this point that I saw the article Metaphor, Simile and Analogy: What’s the Difference? and gave up thinking forever.
at 19:55

Email ThisBlogThis!Share to TwitterShare to FacebookShare to Pinterest
Labels: grammar