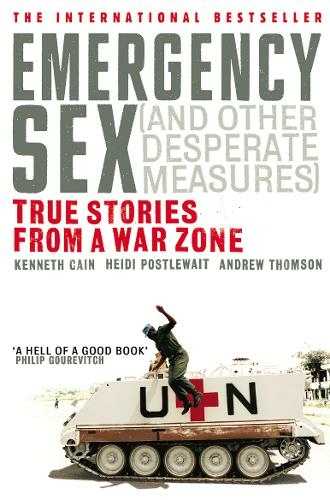 I'm going to recommend this read for a couple of reasons. All the international grief going on at the moment regarding Syria, Uganda, Sudan, Nigeria... fairly unpleasant stuff. The second is that April 7th marks the 18th anniversary of the genocide in Rwanda. Having lived in Rwanda, and spent a day volunteering at Gisozi Memorial Centre during the memorial commemorations, it's something that I always stop to remember.

The above book is an extremely special one.

It's the early 1990s and three young people are looking to change their lives, and perhaps also the world. Attracted to the ambitious global peacekeeping work of the UN, Andrew, Ken and Heidi's paths cross in Cambodia, from where their fates are to become inextricably bound. Over the coming years, their stories interweave through countries such as Rwanda, Bosnia, Somalia and Haiti - war-torn, lawless places where the intervention of the UN is needed like nowhere else. Driven by idealism, the three struggle to do the best they can, caught up in an increasingly tangled web of bureaucracy and ineffectual leadership. As disillusionment sets in, they attempt to keep hold of their humanity through black humour, revelry and 'emergency sex'.

Brutal and moving in equal measure, Emergency Sex (And Other Desperate Measures) explores pressing global issues while never losing a sense of the personal. Deeply critical of the West's indifference to developing countries and the UN's repeated failure to intervene decisively, the book provoked massive controversy on its initial publication. Kofi Annan called for the book to be banned, and debate was sparked about the future direction of the UN. Brilliantly written and mordantly funny, it is a book that continues to make waves.

During my time in Rwanda, one wall of the Programme Office was floor-to-ceiling books. Full of all the literature that people had brought with them on the plane, or had been sent in aid parcels from home. Occasionally, one book was so extraordinary that it ended up 'doing the rounds', which involved people putting their names on a list to read it.

We only had one copy of this book, and it must have been read by over twenty people in a couple of months.

Emergency Sex (And Other Desperate Measures): True Stories from a War Zone tracks the stories of three civilians who joined the UN at one of the busiest stages in its history. From Bosnia to Haiti and Rwanda, it tells of life inside the UN from three very human perspectives.

It's hard hitting, fascinating, deeply challenging and interspersed with moments of extreme humour.

It doesn't matter whether you're interested in world politics or not. It's utterly gripping. Those who have worked overseas will find themselves nodding and smiling along at times, whilst those who haven't will feel as though they have.

I remember opening the chapter on Kibuye whilst sitting on a bus leaving the town. It talked of the massacre there during the genocide, where I had just spent a wonderfully relaxing weekend swimming in Lake Kivu and drinking gin. The two worlds were hardly comparable - a paradox - yet there we were, me and my book.