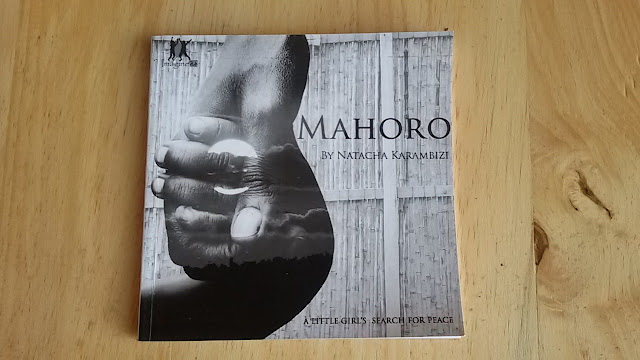 A shout out to ImagineWe who have just released a children's story about the 1994 Genocide Against the Tusti from the point of view of a young girl, Mahoro, and her friend. The book is written by Natacha Karambizi and illustrated with photographs by Rwandan photographer Eric Murinzi. It has a similar feel to it as Rose Blanche by Roberto Innocenti and Christopher Gallaz, which tells a child's perspective of the Holocaust. You can get your copy of Mahoro by contacting ImagineWe directly.
at 18:55 No comments:

Stumbled upon DeAnne Smith on YouTube the other day and lost a couple of hours of my life laughing. Not sure how I hadn't seen her before, but definitely up there among my favourite comedians. If you liked that, check out Melbourne Comedy Festival, Straight Men, Step Your Game Up and Great Debate.
at 20:38 No comments: 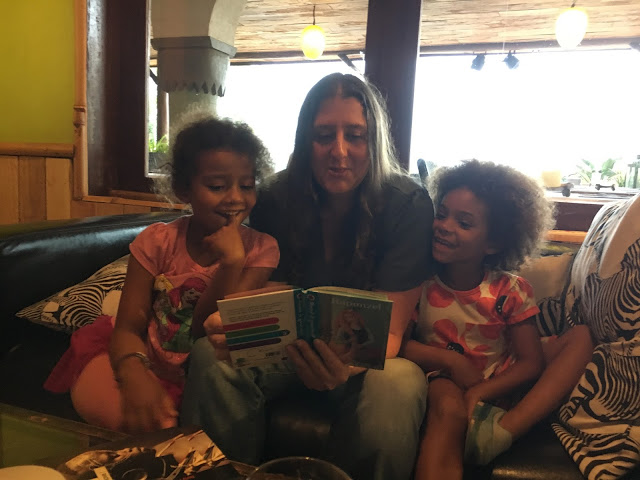 Stories are always a good idea, wherever you are. Just back from a lovely weekend at Byoona Amagara on Lake Bunyonyi, Uganda. Highly recommended. Potential writer's paradise.
at 23:10 1 comment:

Adrian Magson is the author of a wide selection of gripping crime and spy thrillers, a YA ghost novel and Write On! - a writers’ help book. His latest book is Rocco and the Nightingale, the fifth in the Inspector Rocco series. It came out with The Dome Press on 19th October 2017 in the UK.

Hi Adrian. Welcome back to Deckle-Edged. Always a real pleasure to chat to you about your work. Last time, you talked a bit about writing female characters. This time, I want to ask you about your life as a crime writer.

Who were the crime writers you read growing up? Who got you hooked?

Leslie 'The Saint' Charteris was undoubtedly the first, at age eight. Him and Zane Grey, who wrote westerns which I regard as crime novels on horseback, followed by Mickey Spillane, Hank Janson and some other harder-boiled crime writers. Then it was the likes of Alistair MacLean, Adam Diment, Peter O’Donell (who wrote Modesty Blaise), Berkeley Mather and Gavin Lyall. Some of these won't mean much to younger crime readers, but they formed the backbone for my love of crime and spy thrillers, and basically made me want to be a writer. I figured telling stories must be a cool way to make a living. Mmm... took a while!

Did you start out writing crime or have you written other genres? What was the point in your career where you finally realised that crime was your calling?

My first published short story was a crime caper for a newspaper, followed by a few which didn't sell. But my first regular sales were to women's magazines, and basically romance and relationship stories, about as far removed from crime as you could get. Men were secondary and there was nothing allowed 'beneath the chin'. It taught me to write for a market, meet deadlines and word counts, so it acted as my apprenticeship and lasted many years. In between, I wrote half a dozen crime and spy thrillers which didn't sell, features for magazines, which did, a short play, slogans for T-shirts and beer mats. Essentially, anything I could sell and get my creds as a writer. In the end, I thought if I enjoyed writing crime and spy stuff so much, I should put all my efforts into it. That's when I sold my first book featuring a young female reporter called Riley Gavin.

If you could work a case with any fictional detective from literature or television, who would it be and why?

Sadly, though I write crime novels, I'd be pretty rubbish at solving them. I tend to get distracted too easily, and would probably arrest the first person who annoyed me and didn't answer my questions.

So, being a crime writer doesn't give you an edge with other crime series?

I wish it did! I'm so often wrong. I just go with the flow and enjoy the surprises. I think I probably over-analyse who does what, and why, too much and it gets in the way of things. My wife, Ann, usually gets the guilty party way before I do.

What's the last plot that left you stumped, or where you guessed the wrong person?

The Cuckoo's Calling was the most recent I can recall - and I was dead wrong.

Do you always know who dunnit before starting your own novels? If so, how difficult is it not to let slip or give the game away whilst you're writing?

I suppose most of my books could be classed as 'why-dunnits', so I have an idea of the ideal culprit from fairly early on as, in some cases, do the readers. For me, the baddy is as essential to the book as the central character, so I have to get that fixed in my mind. That doesn't mean I might not change it halfway through writing. And yes, sometimes the characters do force their way to the front!

Why did you choose to set Rocco's adventures in France? How much research goes into setting a crime novel in a different country and legal system to the UK?

I went to school in a tiny rural village called Picardie in northern France. After writing five Riley Gavin crime novels and a Harry Tate spy thriller called Red Station, I wondered if I could write a crime novel set in France during the sixties - yes, that long ago. I figured that nobody else would have used it as a setting, so why not?

I knew the places, the people and the atmosphere, so it was simply a matter of doing what all writers do, which was to come up with a plot or two. I like to use some elements of French history as a hook on which to hang the story. For example, echoes of World War Two and their own Vietnam War, the Indochina War, in which Inspector Lucas Rocco served. There's also the effects of Algerian independence, the assassination attempts on President de Gaulle, and what was a very changing society. These were mostly incidental background to the plots, but still required accuracy of research. Being a series, it's actually the characters who come out as most important.

The French judicial and police systems are very different to ours. Trying to explain too much of the detail can easily get in the way of the story. I try to keep it to the plot, the crime and the characters, and smooth out all the technical bumps.

You write several crime series: Rocco, Portman, Gonzales & Vaslik, Gavin & Palmer, and Tate. If they were all working a case together, who would team up, who would start a fight and who would have a fling?

What a great question! I'm not sure they would all mix at all well. Rocco, the French detective, would shrug them off and do his own thing, quite apart from being in a different era. Portman, a freelance protector, would find a high spot with a sniper rifle. Harry Tate, ex-MI5, would wonder why he should bother. Gonzales and Vaslik, private security company investigators, would argue the merits then ignore the others and get on with it. Riley Gavin and Frank Palmer, her ex-RMP sidekick, would only get involved if there was a story to it. Actually, I reckon Riley Gavin might have a fling with Harry Tate. She likes ex-military types.

You've recently signed with The Dome Press. What are your hopes for the future?

Well, the first four books in the Lucas Rocco series were published by Alison & Busby. But they decided they didn't want any more back in 2014, so I got on with writing my other series instead. However, I had the nagging feeling that there were more stories for Rocco to experience. The problem was, it's very tough selling a new book which is part of a series when another publisher retains the publishing and distribution rights to the first ones. I happened to mention this one day to David Headley, who owns The Dome Press. He recognised the problem but, very bravely in my view, took on the challenge and agreed to publish Rocco and the Nightingale. I'm already working on another book for them. It's not a Rocco book, but I have started work on a sixth Rocco one. So, I guess you can say I'm hopeful for the future! Having worked with David and his team, especially my editor, Rebecca Lloyd, and seen the quality of their production, I feel very enthusiastic.

What's your advice for anyone aspiring to be a crime writer in today's market?

I've been writing the Beginners page in Writing Magazine for fourteen years now, out of which came a compilation called Write On! It's a writer's help book, which is full of tips and advice. Plug over. My advice is, if you have a desire to write crime fiction, you already read lots of it and know the general format,  sit down and write whatever's in your head. Don't over-analyse, just put together characters, setting and a good crime to solve, and let your imagination go. Doesn't matter if it ends up as a short story. The thing is, write something and see where you go. The main thing is, enjoy it, because if you have fun writing it, that will show through and it will make the job so much easier. 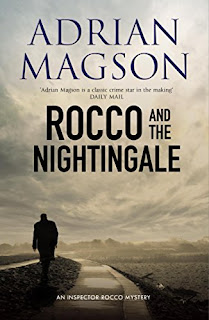 When a minor Paris criminal is found stabbed in the neck on a country lane in Picardie it looks like another case for Inspector Lucas Rocco. But instead he is called off to watch over a Gabonese government minister, hiding out in France following a coup. Meanwhile, Rocco discovers that there is a contract on his head taken out by an Algerian gang leader with a personal grudge against him.
at 09:00 No comments: 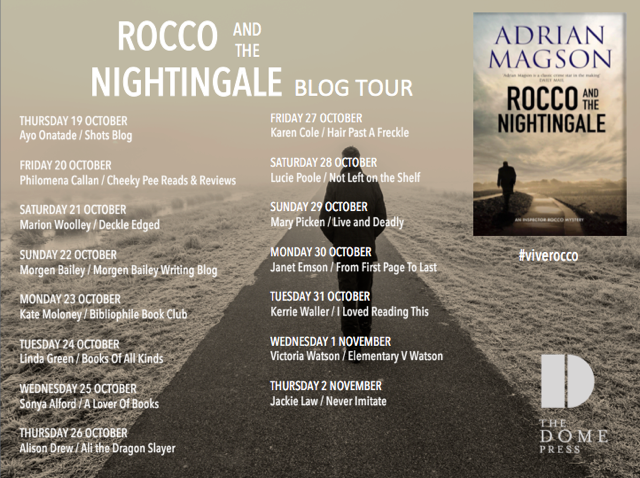 Hi everyone. I know I have been absent of late. I will catch up soon, honest. But I wanted to let you know that on 21st October I'll be hosting a Q&A here with the lovely Adrian Magson. He's dropped by before to talk about writing female characters and he's got a new Rocco crime thriller out on 19th October called Rocco and the Nightingale. If you've never read him before, you don't have to have read any of the previous Rocco novels to pick this one up, so please pre-order your copy or buy on the day. Release day sales mean so much to authors. If you have a question you'd like to put to Adrian, you can let me know via Twitter (@AuthorMGW) or Facebook and I'll try to slip it into the interview.