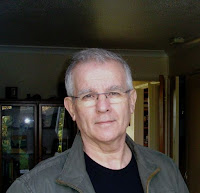 Adrian Magson is the author of eighteen crime and spy thrillers, a YA ghost novel and Write On! - a writers’ help book. His latest book is Close Quarters, the second in the Watchman series. It came out with Severn House in April 2015 in the UK, and is due for release in the US in August.

The Locker, published by Midnight Ink, is the first in a new thriller series featuring private security investigators Ruth Gonzales and Andy Vaslik, due for release early 2016.

A regular reviewer for Shots Magazine, he writes the Beginners and New Author pages for Writing Magazine.

MGW: Welcome to my second guest post from a friend and fellow author. I am very happy to introduce crime writer Adrian Magson, a veteran of page-turning mysteries.

The last time I saw Adrian we were munching Doctor Who cupcakes at our friend Col's leaving party, who quit his job to go teach in the Middle East. This was pre-Rosy Hours and I was considering whether women who write graphic horror get the same response as men who do the same. Whether there is an expectation that male authors can naturally summon the dark side, whereas women are treated with more suspicion by readers. It wasn't a fully-formed theory, and after the publication of Rosy Hours I find my fan-base largely female - though also my anti-fan base who recoiled from the female protagonist's violent nature.

I'm no wiser on the subject, but I'm very interested in Adrian's topic today, which explores the attraction of writing female lead characters. It's especially relevant after the recent research on female protagonists adversely affecting literary award chances. Gender perspective in storytelling is a fascinating topic.

By the way, you can find Adrian's interview with me in last December's issue of Writing Magazine.

I was asked not long ago why so few male authors have women as their main characters.

I can’t speak for other men, but I’ve always had women as either main or strong secondary characters, depending on the storyline and situation.

I should explain that this isn’t me being terribly noble, inclusive or even pro-feminist; it’s because I started out my writing career producing short fiction for women’s magazines here in the UK and overseas. I quickly discovered that while men could be featured, they always had to be secondary.

There couldn’t be any bad language, no unnecessary violence – and nothing ‘below the chin’ (i.e., sex - although I think that’s changed a lot recently). I stumbled on it more by accident than anything (the magazines as a market, not the sex), as there were very few outlets years ago for short crime or thriller fiction, which was my chosen genre (and certainly no online outlets at the time).

Women’s mags, however, were open to ideas, even from men, and actually paid for stories, which was an important aspect of me wanting to be a full-time writer. I even wrote for several years under a female pen-name, but that was because a mag asked me to write some 1st-person female viewpoint stories, and having a man’s name at the top was possibly counter-productive. My wife refers to these as my ‘frock’ years, although I never went so far as to dress for the occasion!

However, this experience did influence me, in that it made me write for a market that wasn’t instinctively my first choice, so I had to work at getting it right. It also gave me an insight to the fact that women didn’t have to be the helpless heroines, and in my first published book (No Peace for the Wicked), which became a series, my main character was Riley Gavin, a young woman journalist.

‘Ah,’ someone asked me once, ‘but she has Frank, a male sidekick. Wasn’t he there just to rescue her in case she got into trouble?’

‘Well, hardly,’ I replied, ‘because she actually rescues him near the end of the book using a Molotov cocktail.’

After five books featuring Riley, I wrote a series of spy thrillers with a male lead, Harry Tate (and a strong female colleague who liked to use a knife to deal with any funny business). This was followed by a French police series set in rural Picardie in the 1960s, the lead again being male, Lucas Rocco.

I was then asked by my publisher to write an alternative male character – another spy thriller series – featuring Marc Portman (The Watchman and Close Quarters, which is just out), to capitalise on the Harry Tate books.

Then I had a change of heart and last year began another series with a female lead, Ruth Gonzales, an investigator with a private security company. The stories are terrorist-related, so guns are involved… and it’s pointless and unrealistic having a woman lead who can’t use weapons, so Ruth more than rises to the challenge when the situation demands. The first book, The Locker, comes out next year in the US and I’m currently working on the second.

Do I have to put on a different hat (or frock) when writing about women? Not really. A strong character is a strong character whatever the gender. The humour can be the same, the tension, the determination to succeed… I just make sure my female leads aren’t simply men in women’s clothing. And I enjoy the change of viewpoint. It’s refreshing to switch characters after a while, and I’m currently hopping between Marc Portman and Ruth Gonzales, so I’ve got the best of both worlds. 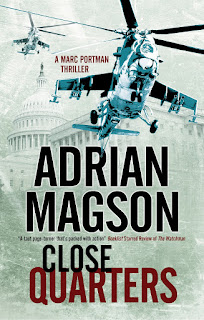 Adrian Magson's latest novel Close Quarters was released in the UK on 30 April 2015 and is due for release in the US in August. It is part of The Watchman series featuring detective Marc Portman, sent in to rescue a US State Department official from Ukraine on the brink of civil war. If you want to follow Adrian from the beginning, his first novel was No Peace for the Wicked in the Gavin & Palmer series. Find him on his blog, website and Twitter.
at 11:32