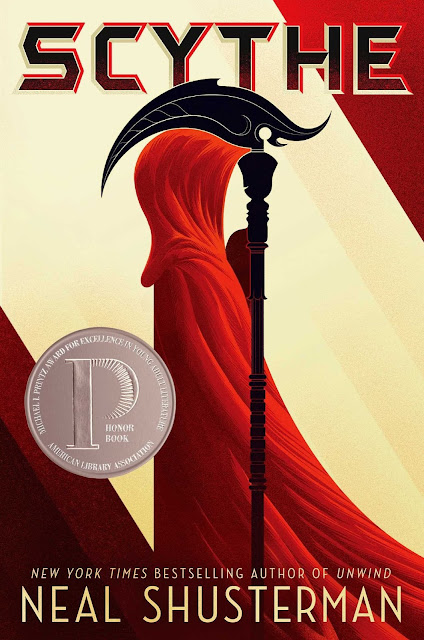 This was a lot of fun.

Picked up completely on a whim because I liked the cover.

A dark, gripping and witty thriller in which the only thing humanity has control over is death.

In a world where disease, war and crime have been eliminated, the only way to die is to be randomly killed ("gleaned") by professional scythes. Citra and Rowan are teenagers who have been selected to be scythes' apprentices, and despite wanting nothing to do with the vocation, they must learn the art of killing and understand the necessity of what they do.

Only one of them will be chosen as a scythe's apprentice and as Citra and Rowan come up against a terrifyingly corrupt Scythedom, it becomes clear that the winning apprentice's first task will be to glean the loser.

Very interesting concept. A bit like Altered Carbon, but everyone gets to live forever, not just the rich. I really appreciated the way it dove right in there without a load of backstory explanation. It's like, 'this is our world, this is how it works, get with the programme.'

I love the concept of 'splatting', which is committing suicide just for the fun of it. Usually from a great height.

It's set in a world where all that can be known is now known. Which, when you consider Big Data, is not so implausible.

The idea of truly wishing to end one's own life is a concept completely foreign to most post-mortals, because we can't experience the level of pain and despair that so seasoned the Age of Mortality. Our emo-nanites prevent us from plunging so deep.

It plays heavily around the concept that, 'there is no art without death.' That, if we could live forever - or, in this case, can't not live forever - then the impetus to invent and create would be lost.

The whole thing was just great. Romping through a different reality that just might, some day, be our own. And some words of wisdom in there, too:

It's the first book in a trilogy by  Neal Shusterman, and I'm likely to go find the second.

If you are the singer, then I am the song,
A threnody, requiem, dirge.
You've made me the answer for all the world’s need,
Humanity’s undying urge.

I stumbled across a series on YouTube that I've become rather fascinated by. Unfortunately, it's by something called Lad Bible, which is instantly off-putting, but the series itself is very interesting. They take older people and younger people either doing the same job, such as a doorman or nurse, or in the same circumstances, such as addicts, criminals, lottery winners and climate change activists, looking at how things have changed over the years.

The one above about homelessness really hit me. Back when I was an undergrad, I knew a homeless guy called Michael who would often sit by the train station. One night, I sat with him as the pubs were emptying, and the amount of abuse he took was unreal. Being a student with a room to go to and parents to call if I was in trouble, I sort of felt I was above it in some way, but the moment I sat on that pavement with him, I was invisible. We watched bottles being hurled, a man get his face smashed in, and an endless forest of legs go past.

It was a strange experience, and many years later went on to inspire a character in a set of short stories.
at 12:37 No comments: 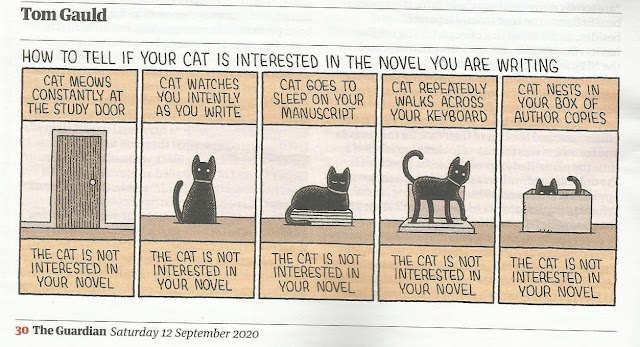 Well, what can I say?

Touched to the core by this. I mentioned the artist Jonathan McFerran the other day, who wrote a really lovely review of Children of Lir. Another mythology junkie, like myself.

Today, he tagged me in on this. 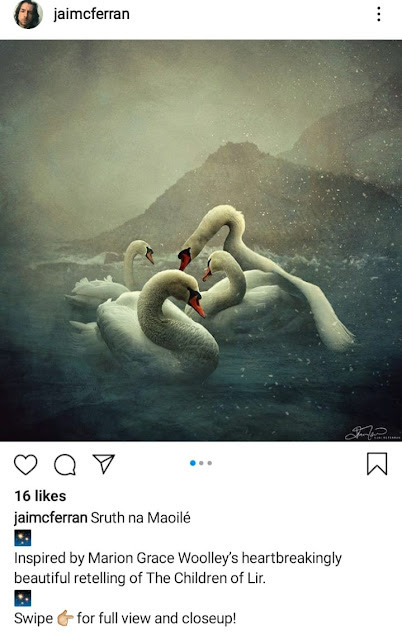 The greatest compliment anyone can ever give your art is for it to have inspired their own in some way. The first time it ever happened for me was when Stephanie Piro drew those beautiful sketches inspired by Rosy Hours. I'll never forget the amazement I felt when they arrived.

I'm just bowled over by this artwork. It's so atmospheric. When somebody likes something you did so much that they feel inspired to create, it's just the greatest feeling. To think this wouldn't have existed if I hadn't written that book, and that book wouldn't have existed if Michael Scott and Lady Gregory hadn't written their works - and on and on it goes in a chain of creation, back to the beginning of time.

Privileged to be an inkstained link in that chain.
at 20:43 No comments: 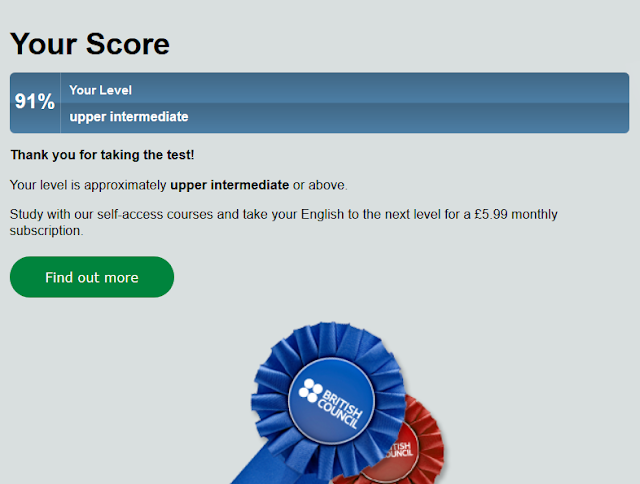 That's nice to know. Apparently I have 'upper intermediate' (or, begrudgingly, above) English language ability.

Thank you British Council for your insight.

Some of your questions were dodgy as ---- (choose the most appropriate word). 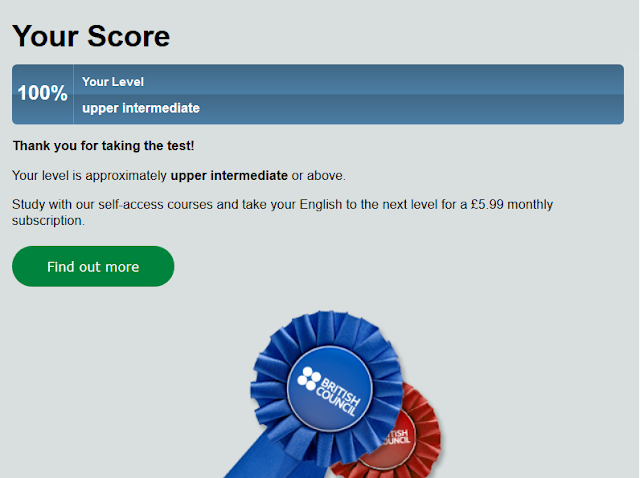 So, I just went back through and entered the exact same answers and got 100%.

It all boils down to how confident you are about your answers. After each selection it asks you this:

And I wasn't certain about some of them, because some of them had more than one acceptable answer. 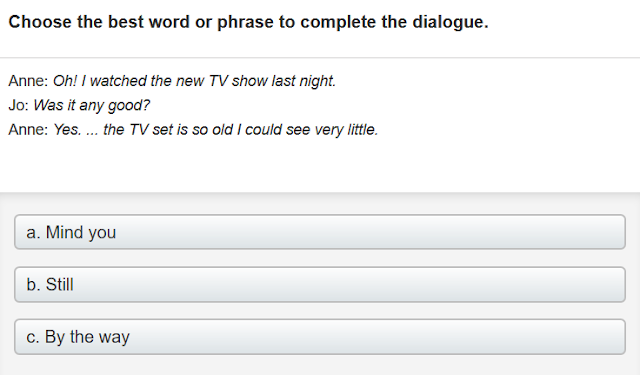 Mind you is the obvious choice there, but, colloquially speaking, still would also be passable. However, when I tried that, I got knocked down to 96%. Although I chose mind you during the first round, I said I was uncertain and lost the points.

So, I was marked down for being a conscientious student. I'm not entirely sure that's fair.
at 13:51 No comments:

I received a lovely review of The Children of Lir the other day, and wanted to return the favour as it was written by an artist with a shared love of the story. His above depiction of Aoife and the swans is fabulous. Dark and atmospheric. I see it a little through the eyes of my own retelling - Lir turned into the rock he sat on for so many years, helpless to break the curse, and Aoife, turned into the storm that consumed her. I love the detailed pattern on the hem of her dress. 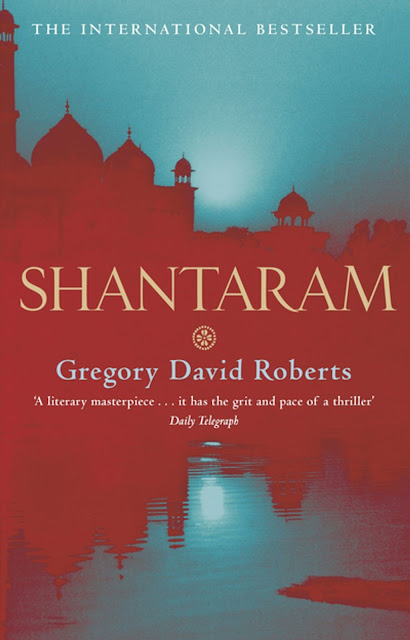 I've had a copy of this on my shelf for years. I bought it after a succession of people told me how good it was. I just never got around to reading it, so I decided to get it on audiobook instead.

It was all they said it was.

Total immersion of the heart, the head, and the Bombay underworld.

It's a semi-autobiographical work. So, it's based really closely on Gregory David Roberts's life as an escaped Australian convict. He broke out of jail and went on the run in India. The way it's written, it's so believable as to make you suspect 90% of it is probably true, but having watched a few interviews and read more about it, the question perhaps lies in our definition of truth. There is a certain truth all novelists recognise in fiction. This book is full of that type of truth.

It's a very clever and compelling piece of work. I highly recommend it. I went back to get the sequel The Mountain Shadow on Audible, but could only find it in German. I don't think I would enjoy that as much, as I don't speak German.

It was sort of sad, as an author, to read that he originally intended there to be four books, but as it took 11 years to write the sequel and he's over 60, he put that idea aside. Time - there's never enough of it. The older a writer gets, the more aware of that they become.

A particularly amazing point about this book is that he started writing it twice in prison, after he was eventually recaptured, but after completing 300 pages, the manuscripts were destroyed by prison guards both times. I know how soul-destroying it is to lose five pages to a Word malfunction. The thought of having to start an entire novel again from scratch would break me.

So glad he was made of sterner stuff.

I usually include a few quotes from the book in my reviews, but honestly, this was such an epic, and it was all so good, that looking through the length of my clip list just exhausts me. All I can say is, pick up a copy.

If you prefer audiobooks, Humphrey Bower narrated it perfectly. Really brought it to life and listening to a first-person narrative spoken by an actual person is always engaging.

Excellent and mysterious stuff.
at 20:51 No comments: