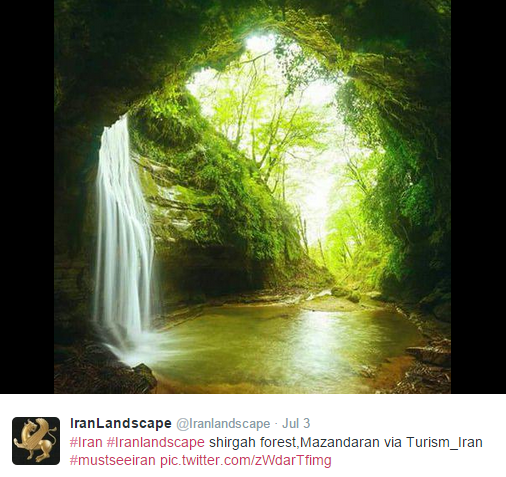 Just found this on Twitter. I wonder if it's the waterfall, on the road to Zirab? It's certainly Shirgah forest!

The heat did not let up as we entered the jungle, though its thick canopy offered some relief. We moved slowly so as not to exhaust the horses, the light through the leaves almost trance-inducing, causing us to fall silent, the thud of our beasts’ hooves against the earth measuring out our own heartbeats.

“These trees are ancient,” I told my companions. “They once belonged to the Verkâna.”

“The Kingdom of the Wolves,” Sheyda echoed, smiling as I turned to look at her. “We know of them here,” she continued. “It is a bedtime story our mothers tell us as children, that we must never go walking through the trees at night, otherwise the wolf people will snatch us away.”

I'm just in awe. I've never seen a picture of it before, and I think my description, bar the boulders on the ground, was pretty darn accurate! It's incredible that our minds can do that, connect with places we've never been.

At the bottom of the gulley, we could look up at the trees lining the path we had previously been on. It was as though someone had covered our ears with pillows, the sound of the birds seemed muted from below, the sunlight dimmed.

“This way,” Eirik called, his horse several lengths ahead.

As we continued, a low rumbling replaced the silence, becoming a roar as we turned a bend in the road. We found ourselves confronted by a sheer cliff towering before us. It was as though a giant had thrust his trowel into the earth and scooped out a hole, exposing a rocky, semicircular scar to the world. Plummeting down this grey rock was a jet of pure, crystal-transparent water.

Dismounting, we walked towards it over ground made uneven by head-sized boulders. We had to strain our necks to gaze up, and the further we looked, the greener the walls of the waterfall became, painted with moss and overhanging vines.

Beneath, where the water had kissed its reflection over generations, it left a dark circle, as though it fell straight to the centre of the earth itself. This must have been what the woman meant by a well beneath the waterfall. I listened carefully, trying to decide whether it sounded as though it were singing or drumming, yet this was like placing your ear next to a miquelet and trying to decipher the words it spoke as you fired.

“It’s incredible,” I whispered, my voice washed away in the ringing chasm.

I felt tiny in its presence, as though the sound alone could crush me. A deliciously fresh breeze blew off the surface of the pool. At first it felt like a tonic to the warm weather, but soon my skin grew rough with goose bumps. Still, none of us hurried to leave.

Sheyda walked all the way up to the pool, her leather sandals slipping across the stones. When she reached it, she drew back her scarf and cupped her hands together. She drank from them before cupping water over her face and head.

Watching from a distance, it looked like a holy act. 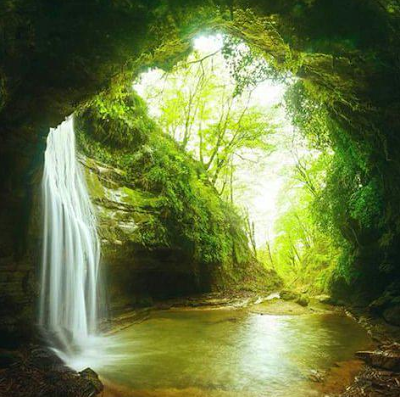