Beautiful tweet about Guillermo del Toro’s sketchbooks. I've included the pictures larger below. He created such wonders as Pan's Labyrinth, Crimson Peak and The Shape of Water. 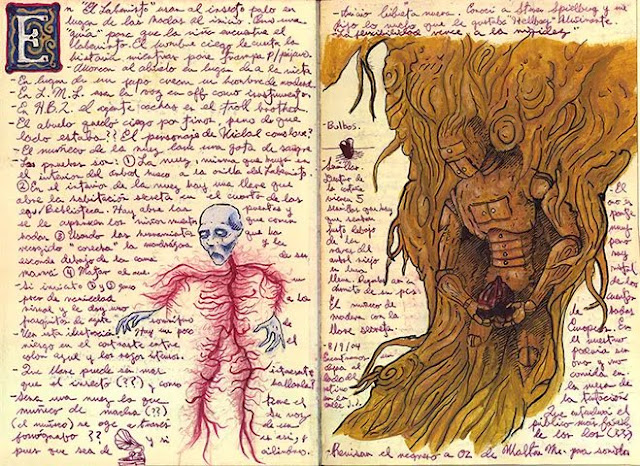 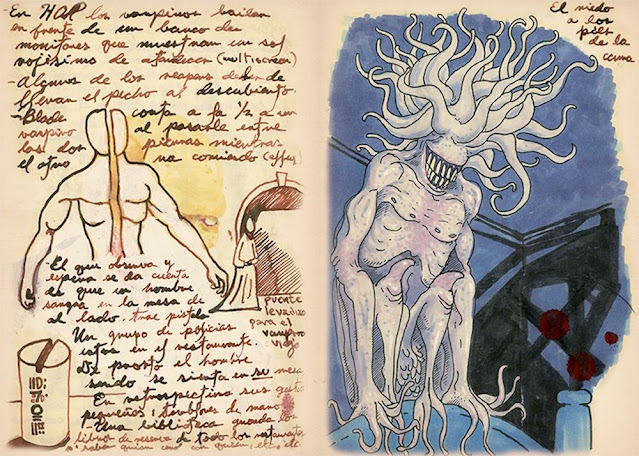 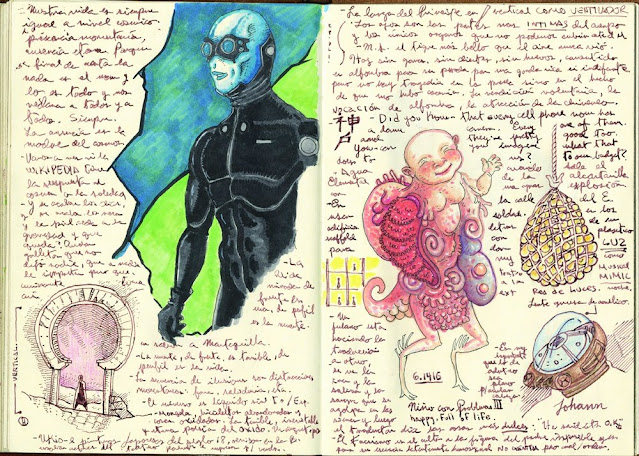 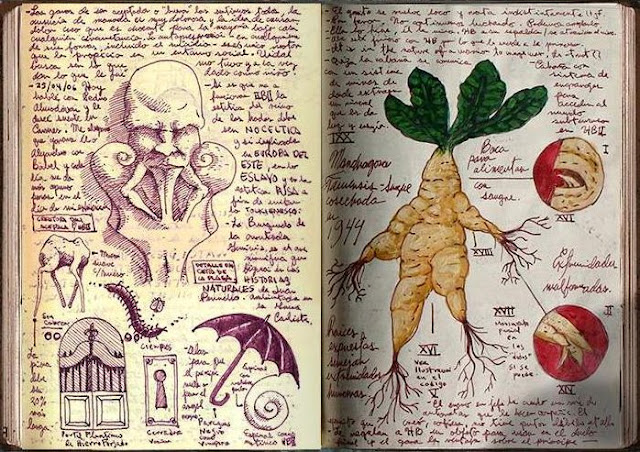 Email ThisBlogThis!Share to TwitterShare to FacebookShare to Pinterest
Labels: art

Yup, that about sums it up. If you love old-school computer games, check out Unavowed and the Blackwell series. They're fairly modern games, Unavowed came out in 2018, but they're done in the style of a pixelated RPG. It's like stepping back in time. They're great, and you can find them on Gog, along with originals like Day of the Tentacle, Monkey Island and Gabriel Knight.
at 16:58 No comments:

The Garden of Evening Mists 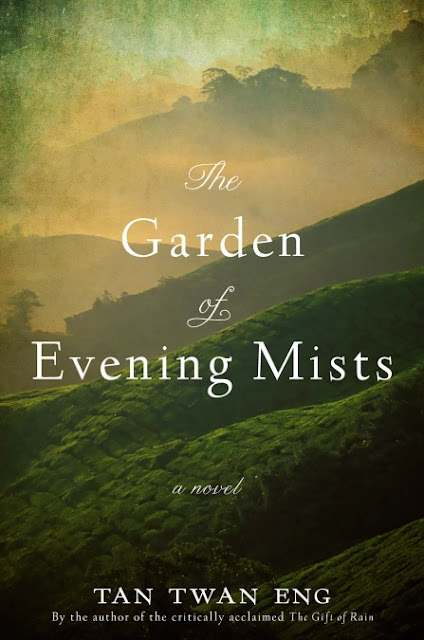 I picked this up after a friend was in town. Lovely Antonia, who was one of the first people I met when I first moved to Kigali back in 2007. A fellow VSO working in Huye. She turned up on my gate with our friend, Karen.

She came back to visit about a year ago and we caught up over lunch. I noticed she was reading The Garden of Evening Mists. I liked the title and I asked if it was any good. She said it was, so I ordered it. I like reading books that friends are reading. It makes me feel closer to them.

This one was particularly canny because it talked about the gods of memory and forgetting. During our lunch, we had a really confusing conversation, trying to remember whether we'd been at the same party together a few years ago. We both had memories of being at the same place, but weren't completely certain it was at the same time. Eventually, we decided that we had both been at the same party in our memories. We settled on 'shared and invented memories,' which are just as good as real ones. 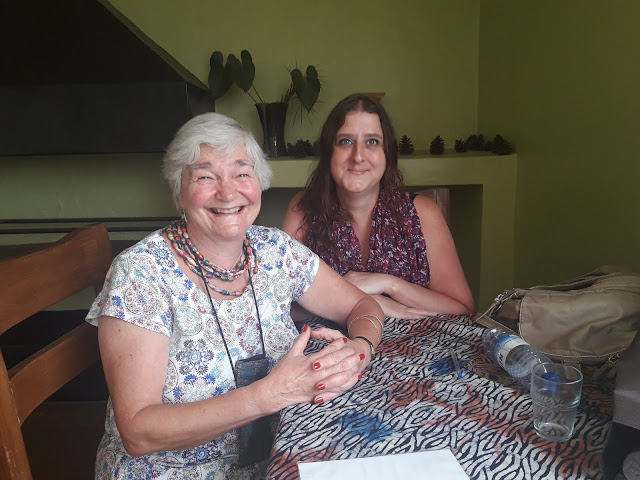 The book dealt with a period in history that I was wholly unfamiliar with:

Malaya, 1951. Yun Ling Teoh, the scarred lone survivor of a brutal Japanese wartime camp, seeks solace among the jungle-fringed tea plantations of Cameron Highlands. There she discovers Yugiri, the only Japanese garden in Malaya, and its owner and creator, the enigmatic Aritomo, exiled former gardener of the emperor of Japan. Despite her hatred of the Japanese, Yun Ling seeks to engage Aritomo to create a garden in memory of her sister, who died in the camp. Aritomo refuses but agrees to accept Yun Ling as his apprentice "until the monsoon comes." Then she can design a garden for herself.

As the months pass, Yun Ling finds herself intimately drawn to the gardener and his art, while all around them a communist guerilla war rages. But the Garden of Evening Mists remains a place of mystery. Who is Aritomo and how did he come to leave Japan? And is the real story of how Yun Ling managed to survive the war perhaps the darkest secret of all?

It was a very slow burn, and took rather a while to get going. Longer than I would usually stick with. But I'm glad I did, because the end was really something. It's very beautifully written:

The clock in the tower above the central portico chimed, its languid pulse beating through the walls of the courtroom. I turned my wrist slightly and checked the time: eleven minutes past three; the clock was, as ever, reliably out, its punctuality stolen by lightning years ago.

The temperature continued to drop, the air warmed only in the short stretches where the road dozed in the sun. At the Lata Iskandar waterfall, the spray opened its net of whispers over us, rinsing the air with moisture that had travelled all the way from the mountain peaks, carrying with it the tang of trees and mulch and earth.

Memory is like patches of sunlight in an overcast valley, shifting with the movement of the clouds. Now and then the light will fall on a particular point in time, illuminating it for a moment before the wind seals up the gap, and the world is in shadows again.

Old countries are dying and new ones are being born. It doesn’t matter where one’s ancestors come from. Can you say – with absolute certainty – that one of your forebears did not sail from Siam, from Java, or Aceh, or from the Islands in the Sunda Straits?

It's a land where breath forms a milky cataract on the windscreen of a cold car, roosters bugle at the sun, and no one wishes to die in a language they cannot understand. The book also keeps repeating The Cloud by Shelley. It's one of the character's favourite poems, as it is mine. I was able to recite along by memory when it got to that part.

It was largely set on a tea estate, which is something I knew a little about, having once spent some time on one. There was an argument at one point in the book, where one of the tea estate managers wanted to tear up the artificial Japanese garden and replace it with native trees. Here in Rwanda, tea estates up near Gishwati Forest plant imported eucalyptus because it grows fast so makes excellent fuel for the dryers, however, they are mandated by the government to plant a certain number of native trees as well.

The book was an introspective look at art, from the art of gardening, to the art of woodblock printing and the art of horimono tattoos. I feel that I learned a lot, and that it was also a commentary on the art of memory.

Like I say, a slow starter, but worth it.

I think they also made it into a film. 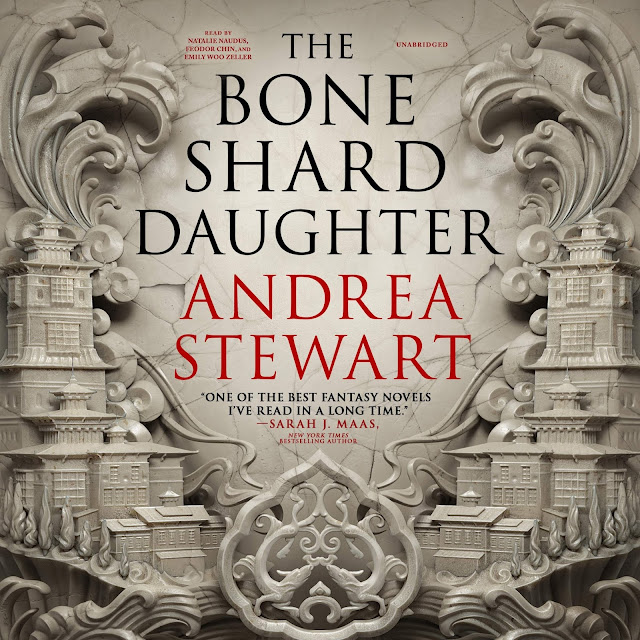 Loved the cover on this one, reminded me a bit of the intro to Black Sails.

The emperor's reign has lasted for decades, his mastery of bone shard magic powering the animal-like constructs that maintain law and order. But now his rule is failing, and revolution is sweeping across the Empire's many islands.

Lin is the emperor's daughter and spends her days trapped in a palace of locked doors and dark secrets. When her father refuses to recognise her as heir to the throne, she vows to prove her worth by mastering the forbidden art of bone shard magic.

Yet such power carries a great cost, and when the revolution reaches the gates of the palace, Lin must decide how far she is willing to go to claim her birthright - and save her people.

Not a bad read, some nice imagery and words of wisdom:

My insides boiled like a pot ready to accept a feast of crabs. I breathed out the heat of it and kept my face cool.

The drip, drip, drip of my blood on the floorboards, like the remnants of a storm that had long since passed.

When a shark offers up a pearl, be wary of its teeth.

And some poignant moments:

Later, on nights where we'd sit on the beach and gaze at the stars, she told me that she fell in love with me on a rainy day in my mother's kitchen.

"You were helping your mother make dumplings," she'd said, her head pillowed on my shoulder. "You were quiet. For once in your life, you were quiet. And when I sat next to you to help, shoulder to shoulder, I could feel a future in that silence. You always say so many things. Always, always talking. So many stories. But it wasn't until you were silent that I could feel the truth of you beneath all the words, all the stories..."

Suitable for anyone who likes high fantasy. It reads as the set up to a series. Like most people probably did, I was expecting Sand to turn out to be Jovis's abducted love. She still might, but we'll find out in the next one, as the book ends on the brink of war.

I also had a lazy brain-fart moment. I was finding it hard to imagine Mephi, so my mind latched on to Snarf from ThunderCats, and that is what he became. I hate when your imagination hijacks you like that. It might have been something about the way the part was narrated in the audiobook.

It was a big and interesting world, though. I like the idea of islands that can migrate and change size - or completely sink. And the idea of constructs, which are artificially created beings that follow set commands.

There's a great picture of Andrea Stewart's cat on Reddit. I reckon her kitty would get on very well with mine. 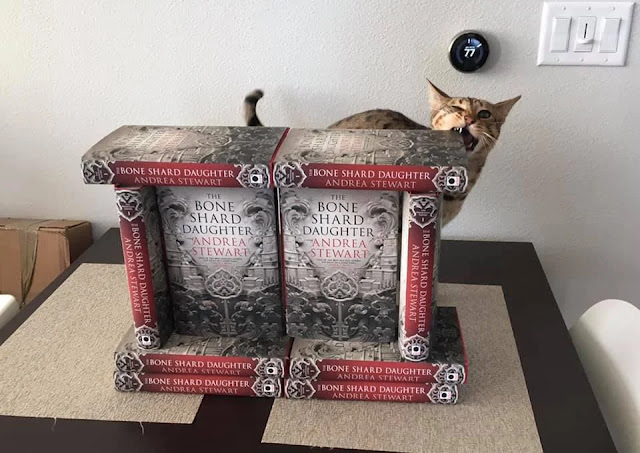 How to Format a Short Story for Submission

I've done a little video update on formatting a short story for submission to a writing competition. It also works for manuscripts being submitted to publishers.

This is an upgrade on my post from 2013 which walks you through it using screenshots.

I still recommend this great layout tutorial by William Shunn.

My lovely friend Leonidas Moustakas sent me these very cool posters and pins. We met dancing around a campfire in a stone circle many years ago, and he now works for NASA. Thought I'd share them as Rwanda has just announced it's launched its own space agency. 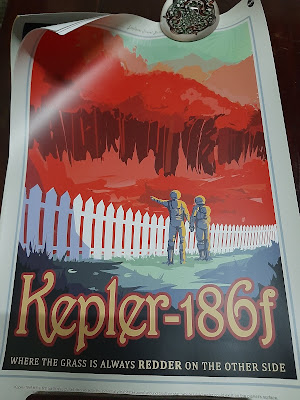 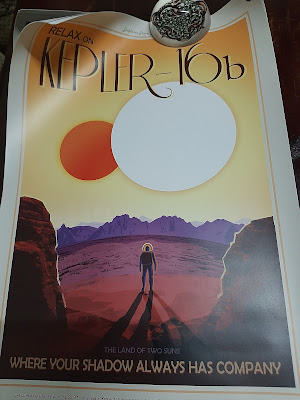 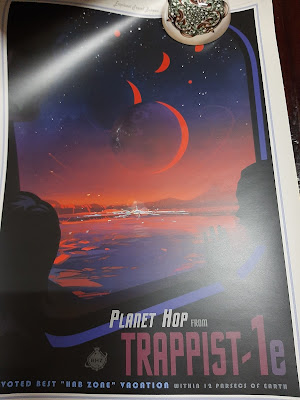 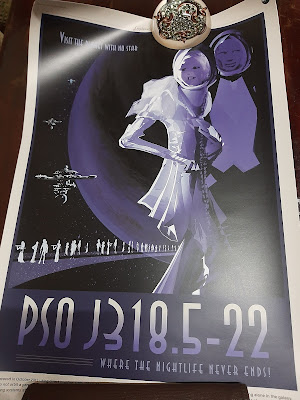 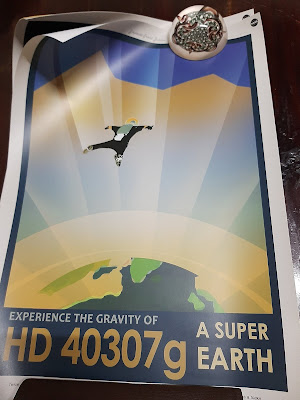 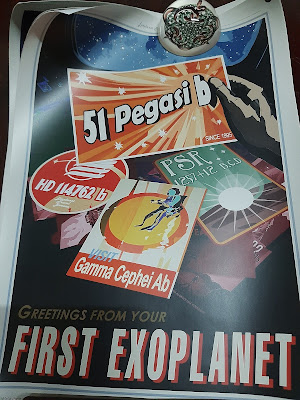 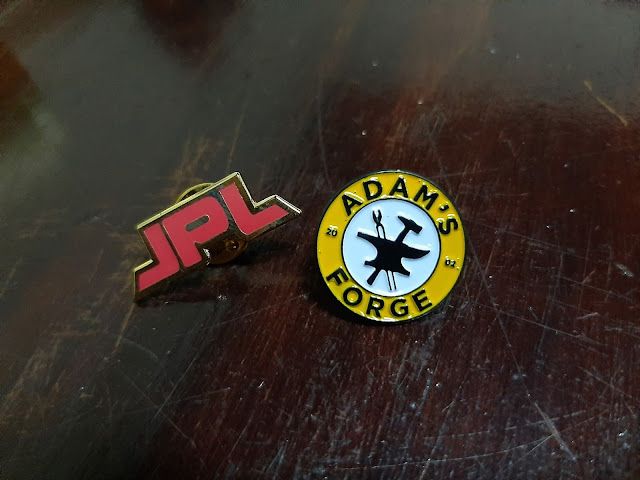 I've just discovered Max Miller's YouTube channel where he finds and makes old recipes. He also does a lot of research into the time period and the ingredients available. It's really interesting, he's also got a discussion group and a Patreon page.

I've taken the plunge and started a YouTube channel.

You can find out what it's all about here.

The video above is my first offering. It's a look at universal book links, which help to direct readers to your book on the correct sales page for their country. It's quite clever stuff and really useful when designing a simple, easy-to-navigate website.

I hope it's helpful, and do let me know what you think.

It's a long time overdue, but I have a swanky new website.