Opened The Guide the other day and notices an announcement for the sixth series of Dexter!

In honour, I'm resurrecting these two posts from a previously defunct blog: 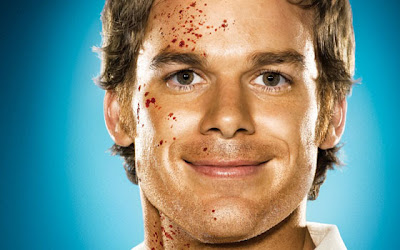 It's hard to believe how popular Dexter Morgan has become. He first appeared in the novel Darkly Dreaming Dexter in 2004, with Jeff Lindsay picking up the Dilys Award for mystery fiction a year later. The very next year, Dexter spawned his own hit TV series which is now in its fifth run.

I first saw the show in Sierra Leone where I was spending Christmas 2008. I hadn't seen TV in a long time, so I was fixated by all the moving pictures. Dexter was instantly engaging. It played on all of those baser instincts you have on days when you just really want to kill someone. But you don't. Because that would be very wrong. Plus you don't really mean it, you just think you do at the time.

But Dexter does. He really does.

For anyone who's been living in a box (or Central Africa) for the past few years, Dexter is a serial killer who only kills serial killers.

What's interesting is that, like Howl's Moving Castle, there's both the books, and the moving picture version. They're both very good, but very different.

The difference isn't in theme or in style, but in characters mostly. The ones who live and the ones who die. But I won't go into that because I don't want to spoil anything. One thing I will say, having read up to book four and watched season four, is that Dexter is a lot closer to his step children Cody and Astor in the books, for deliciously dark reasons.

As a writer, I have to say I'm in awe of Jeff Lindsay on this one. The boy done good. Not only did he come up with an extremely original idea, but he well and truly made it fly. Accepting the opinion that there is 'no such thing as an original idea' (and therefore someone is bound to crawl out of the woodwork at some point and try to sue him), this was a lightning bolt of sheer innovation.

You know it's good because, for the first half of the first book, the TV series hardly deviates. Even the lines are straight from the page. Which means it's very good.

Entertaining, atmospheric, appealing and just a little bit challenging on occasions, Dexter is one of those stories that you welcome into the world.

As most people are more familiar with the TV show, and as I'm all about books, I thought I'd copy the blurbs to tempt you to rush out to your local independent Watersone's and get reading:

Darkly Dreaming Dexter: A serial killer with a heart...be grateful it's not yours. Dexter Morgan appears to be the perfect gentleman. He leads a normal, quiet life working as a forensic officer for the Miami Police. He has a nice, shy girlfriend and is liked by her young children. But Dexter has a secret hobby. He's an accomplished serial killer.

So far he's killed dozens of people and has never been caught, because he knows exactly how to dispose of the evidence. And there are those who would rather he wasn't caught at all, because Dexter is a serial killer with a difference. He only kills the city's bad guys.

Then Dexter's well-organised life is thrown into chaos. Another serial killer is invading his territory - and he wants Dexter to come out and play...

Dearly Devoted Dexter: Serial killer or family man...or both? A charming monster. A macabre hero. The serial killer who only kills bad people is back on the prowl - at least he would if he could shake off his permanent shadow. Ever since their paths first crossed, the handsome, charming homicidal maniac Dexter Morgan has been pursued by Sergent Doakes. Dexter may well be a Miami PD blood-spatter analyst, but Doakes has a pretty good idea of how Dex likes to spend his free time, and he's determined to catch him in the act.

Then a body turns up, horribly mutilated and barely breathing. To trap the torturer, Doakes and Dexter will have to work together - and one of them will have to be the bait...

Dexter in the Dark: No place for the wicked. Dexter Morgan, Miami PD blood-spatter analyst, is accustomed to seeing evil deeds - he occasionally enjoys committing them himself. Guided by his Dark Passenger - the voice that helps stalk his prey - he lives his outwardly normal life according to one simple rule: he kills only very bad people.

Dexter by Design: Bad blood runs deep. Married life seems to agree with Dexter Morgan: he's devoted to his bride, his stomach is full and his homicidal hobbies seem nicely under control. But old habits die hard and Dexter's work as a blood-spatter analyst never fails to offer new temptations that appeal to his offbeat sense of justice...

Luckily for Dex, there's someone out there with particularly twisted tastes. Dexter may have never been a big fan of art - but the discovery of an artfully displayed corpse naturally piques his curiosity. Dexter is back in business.

Just be aware that the plot and course of the two mediums take rather different paths. Attack them with the intention of loving both in their separate, yet wonderful, ways. The third Dexter novel goes deeper into what the Dark Passenger is, and where it may have originated from.

I actually came in halfway through the second series and kept watching largely because it involved Jaime Murray, who played the slightly deranged Lila Tournay, but whom British viewers might be more familiar with from Hustle.

Off-stage appeared to unravel several dramas of its own, including the news that lead actor Michael C. Hall was diagnosed with Hodgkin's lymphoma, and eloped with co-star Jennifer Carpenter, who plays Deborah Morgan, Dexter's sister.

As a fan of the show, the books, and the entire concept, let's hope for many more stories of heartfelt butchery in the name of entertainment. 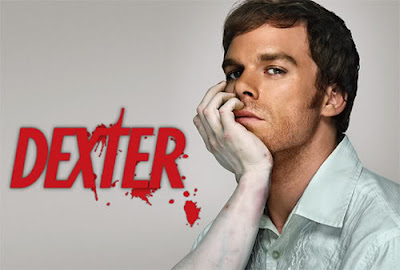 The other week, the Guardian's Guide included some interesting facts, which I thought I'd pass on.

Opening lines of the first episode: Tonight's the night. It's going to happen again and again.

Number of times Dexter has dispatched a victim using a:

Most likely to hear from his Dark Passenger whilst:

Had a fantastic day today.

Headed to Malvern Theatre to see one of my all-time favourite performers, Tim Minchin.

He was playing there as part of the piano festival, and there was the sexiest red piano in the foyer, a Yamaha Elton John special edition. It even played itself! Oh, dear gods, it was beautiful.

The gig itself was unbelievable. The Cont song was pure genius, complimented by all the greats: Prejudice, Dark Side and the Boob Song (Confessions).

It took a while to realise it wasn't a punchline song. Sort of hypnotic. Perfect song to stem a repeat encore, because it left everyone thoughtful. Sort of sad, a little. "As you fell for her, she stole from you." Hmm.

Totally excellent day.
at 15:20 No comments: