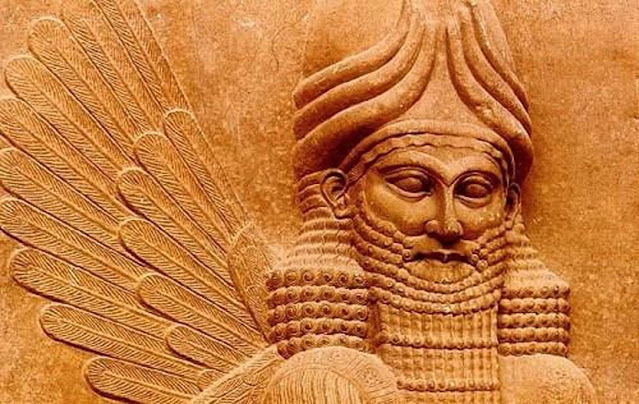 Yikes, finally made it to 125,000 words on Akkad. That's just over 400 pages of double-spaced TNR 12pt. You may have noticed I've slowed down a bit. After a very productive couple of weeks, I wrote myself into a corner during a battle scene, and it's taken several days to figure out how to get out of it.
On the move again now, marching towards Uruk to take down Lugal Zage-Si.
I must admit, I do not enjoy writing battles very much. I either feel like I haven't thought it through carefully enough or that I've thought it through too carefully. But I think I'm managing to keep the pace rolling on this lengthy campaign. Sargon was a sort of Alexander the Great character of his day, so he covered a lot of ground.
I feel there's still quite a bit left to go and the word count did worry me a little as it's now the longest book I've ever written, but then I look at George R. R. Martin's wordcount and I feel totally fine again. His Song of Ice and Fire books ranged between 293,000-415,000 words (rounded).
I know that editing this is going to be seriously tough. Without blowing my own trumpet, most of my previous books came in without too much editing required. Even Children of Lir (120,000) was pretty well formed. But this one is going to be utterly crazy. Usually my edits drop the word count, but I think there's quite a bit of detail and a little extra research to add here, and some scenes to insert to make sure the whole thing feels like it was well conceived from the beginning - which it absolutely wasn't. That wonderful Neil Gaiman quote: the second draft is the step in the process where you make it look like you knew what you were doing in the first draft.
I must admit, I am looking forward to it, though. Mostly, I do enjoy editing, because it means the hard part is over. I know editing isn't easy, but it's not as difficult to be creative when you have material to work with. Filling up that blank page in the first place is way harder.
So, plodding along.
See how it all turns out.
at 15:50 No comments: 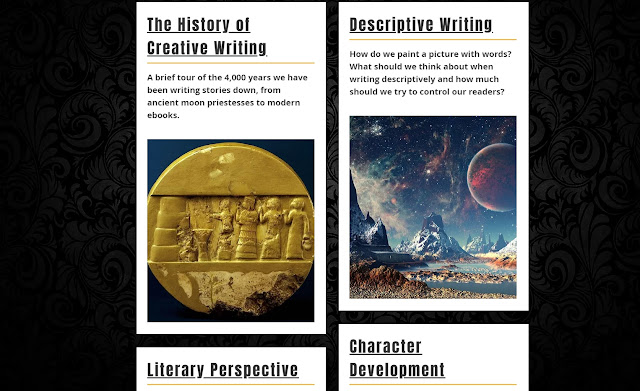 I'm currently in the process of putting together a free writing course, based on my university lectures. It includes foundation units on descriptive writing, literary perspective, character development, writing dialogue, worldbuilding, biographical writing, and useful tips on laying out your manuscript for submission and improving English grammar. You can find the course here, on my website. If there are additional units you think I should add, please do let me know. The course is completely free, but there is also a paid option in some of the units to receive personalised feedback on your work.
at 07:44 No comments:

I have a story coming out later in the year with Bridge House Publishing. I started entering short story competitions again this year after a long hiatus, and I've really enjoyed it and had some success. Bridge House sent some feedback to writers after the competition closed, so I thought I'd break it down and add my own tuppence worth. Just a few tips and tricks to give yourself a better chance of success.

I picked this up recently. It's one of the rare occasions an author has tweeted me suggesting I check out their book for free, and I've done so. I was in the mood for a set of short stories and I liked the title.

A bolt of lightning. A crack of thunder. The lingering smell of ozone in the highly-charged air.

And the world has changed forever.

Welcome to Thunderlands. It looks the same on the surface, but there's just a hint that all might not be what it seems beneath. Even the most ordinary things may be just a touch off kilter.

Stewart Bint’s collection of 21 short stories ranges from the sublime, through powerful, puzzling, funny, horrific and different, to the unforgivably ridiculous.

The Kindle edition was free that day, but I noticed there was also an Audible version for only £2.99, so I bought that. It's quite unusual to find people giving away free ebooks that also have an audiobook version.

The stories were entertaining, and most of them very short, though there was one in there about a stamp collector, Money to Burn, that was probably the best piece of flash fiction I've ever read. It was so clever and so horrifying at the same time. One of those little gems that sticks with you and you find yourself still thinking about a few weeks later.

Now, I'd always thought of Santa Clause as a kindly old man who loved children. So, it came as a shock to find he was appearing in court, and the charges fair made me gasp. Cruelty to children, they were. Who'd have believed it?

An easy listen, and some interesting ideas. He's very good at changing perspective, so you think you understand what's happening and then you realise you don't. One moment you're looking at a steam train, the next at a model railway. Nicely done.

I decided to make this video about writing synchronicities, which are weird little coincidences that happen when you write. From sharing it in a writing forum, it seems I'm not alone...

Email ThisBlogThis!Share to TwitterShare to FacebookShare to Pinterest
Labels: musings, my work, video 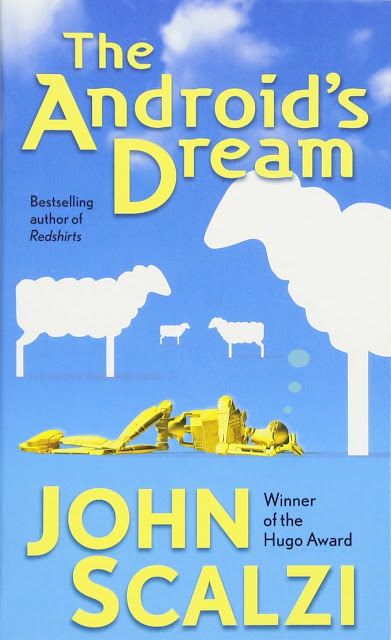 I picked this up for kicks as it sounded fun:

A human diplomat creates an interstellar incident when he kills an alien diplomat in a most . . . unusual . . . way. To avoid war, Earth's government must find an equally unusual object: a type of sheep ("The Android's Dream"), used in the alien race's coronation ceremony.

To find the sheep, the government turns to Harry Creek, ex-cop, war hero and hacker extraordinare, who, with the help of a childhood friend turned artificial intelligence, scours the earth looking for the rare creature.

But there are others with plans for the sheep as well. Mercenaries employed by the military. Adherents of a secret religion based on the writings of a 21st century SF author. And alien races, eager to start a revolution on their home world and a war on Earth.

To keep our planet from being enslaved, Harry will have to pull off a grand diplomatic coup, a gambit that will take him from the halls of power to the lava-strewn battlefields of alien worlds. There's only one chance to get it right, to save the life of the sheep―and to protect the future of humanity.

Absolutely loved it. The wackiness of Yahtzee Croshaw's Jam with a definite dose of Douglas Adams. Space Opera at its very best, and narrated, incredibly well, by Wil Wheaton.

A joyous romp through the great beyond, with aliens who communicate through farting, another species whose pregnant females are banned from earth due to an extremely gooey and carnivorous procreation cycle, and a species of sheep with electric-blue wool.  However, the character of Narf-win-Getag did appear in my brain looking exactly like Lrrr from Futerama, and refused to morph into anything else for the duration of the book.

It was all-round delightful crazy:

[The Church of the Evolved Lamb] preferred not to be noticed whenever possible and remained small both by selective inclination of its members and by the fact that it takes a certain sort of person to want to join a church based on the desperate manoeuvres of a second-rate science fiction writer.

Archie looked over to Acuna, whose face was a dangerous shade of blank.

Every space-going cruiseliner with a promenade deck registered for service by the UNE had to be able to lock down the entire deck at least, and preferably the deck in sections, to ensure a hull breach on the promenade deck did not threaten the integrity of the entire ship or expose any more passengers than absolutely necessary to the risk of having their blood boil into nothingness as they unexpectedly toured the cosmos without a ship.

Really clever and entertaining. Highly recommend, and John Scalzi appears to have an interesting blog.

Thought I'd try and kickstart a BookCrossing campaign in Rwanda. Last tried this about fourteen years ago. Not sure it will work, but it's fun to try. Kigali Iwacu ('Kigali is home,' or 'feel at home in Kigali') T-shirt courtesy of my friend Valentin, who recently made me a gorgeous new sofa. I didn't realise it was so well colour co-ordinated with the BookCrossing logo until the edit.