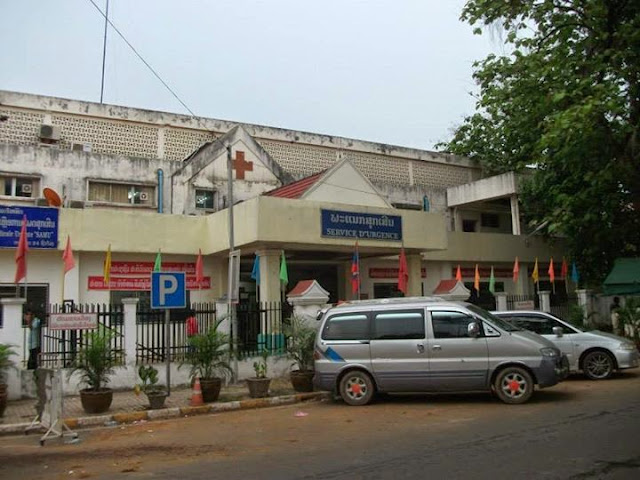 Having a fantastic time in Laos celebrating Pii Mai (New Year). Cycled past this hospital in Vientiane and couldn't resist stopping to take a photo. It's the very same hospital which is the setting for Colin Cotterill's Dr Siri Paiboun series. An excellent read. Very privileged to see the fact behind the fiction.
at 07:17 No comments: 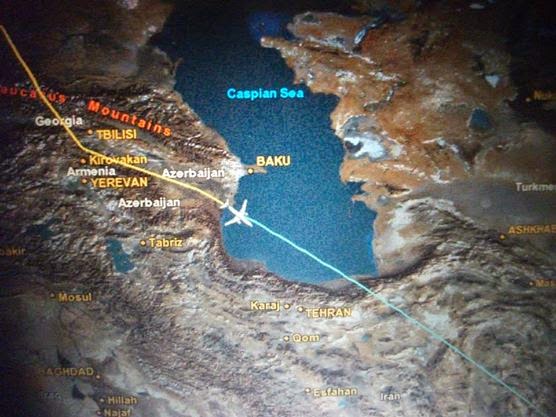 Whilst flying between Heathrow and Mumbai yesterday, I flew right over the top of Sari, the setting for my latest novel, due out soon with Ghostwoods Books (@GhostwoodsBooks). I gave a little wave. 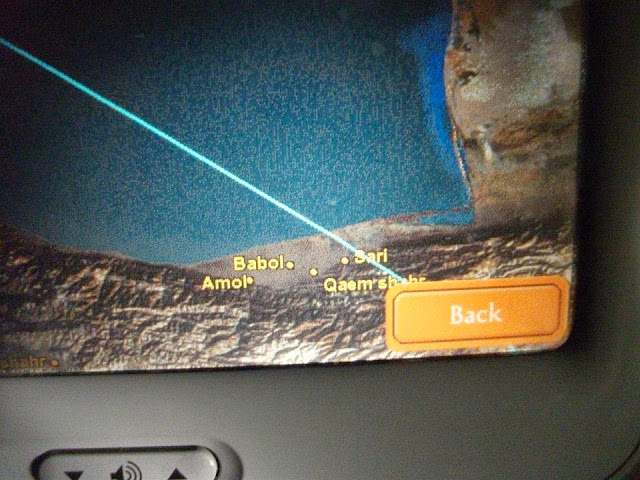 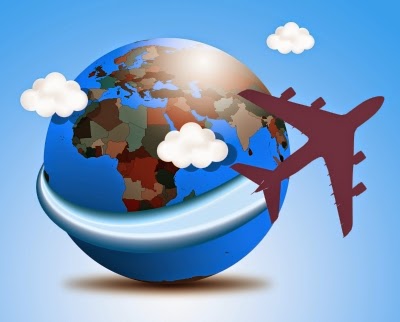 This may be my last blog post for a couple of weeks.

I'm catching the bus to Heathrow at 1:30am. Off to see Martine & Ruairí in Laos, then on to Kenya and possibly my old stomping ground of Rwanda.

Those who follow my travel blog will know that, from time to time, I do strange things like join VSO or couchsurf to Poland. I've tried rubbing cream on my itchy feet, but turns out it wasn't athlete's foot after all, just an insatiable outbreak of wanderlust.

I will be updating blogs periodically, when internet allows, but I do need a little breather, and I'm hoping to focus on other writing projects in the run up to the Ghostwoods release.

There's also a word cloud of writing-related labels down the right-hand side of this blog where you can scour my previous posts for items of interest - and cartoons.

I shall return shortly. 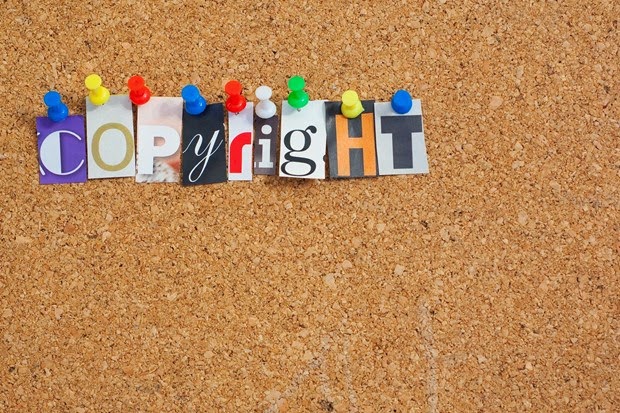 Whilst looking for the answer to a question on fair use, I stumbled across this extremely helpful Public Domain Calculator. If the work you wish to use was published in the EU or Australia, it'll help you fathom whether it's available for public re-use.

If you're in America, there's a slightly less interactive, but equally useful, table online.

There's also some extremely interesting news about the relaxation of copyright laws in the UK to encourage innovation. A lesson from fashion's free culture?
at 18:07 No comments:


Today marks the 20th anniversary since the Rwandan Genocide.

I was there in 2009, during the 15th anniversary, and hope to return this year to visit friends. I've written about the genocide in the past on my travel blog (one, two and three) and shared poetry, spoken of the wonderful things about Rwanda, too, including the gorillas.

This year, I thought I would mention some books which formed part of my consciousness on this topic.

Fergal Keane was the BBC correspondent in Rwanda during the genocide. His book, Season of Blood, was the first I read on the subject. It documents his memories of that time and helps to explain how events unfolded. There was an accompanying documentary, Journey into Darkness (1994), which was played at Gisozi Memorial Centre in Kigali.

This is one that I have not read, but wanted to include as there is a documentary of the same name. Roméo Dallaire was Commander of the UN peacekeeping forces during the genocide. He gave an interview about this book on the 10th anniversary, which you can watch on YouTube. Shake Hands with the Devil is a key work on the genocide.

Emergency Sex: True Stories from a War Zone, is one of the best books I've ever read. It follows three civilian UN staff through most of the world's major political disasters and genocides of the early 90s, including Rwanda. Like Dallaire, it's a damning indictment of bureaucracy over human life, but it does bring a little humour to the subject. Previous review here.

We Wish to Inform You, was the second book I read on the matter, pre-departure. It is American journalist Philip Gourevitch's attempt to unravel the political and social causes of the genocide, to prevent it from being written off as simply 'a tribal conflict.' He does a very good job.

I dearly want to mention Stars of Rwanda. I don't think it's available anymore, but perhaps by contacting Wiljo Woodi Oosterom directly you can get a copy. A Deaf colleague showed it to me, because it had pictures of deaf children in. The book catalogues children's experiences of the genocide through their drawings and stories.

This is a slightly more academic work issued in 1995 by African Rights. Not So Innocent explores the role of women as perpetrators during the genocide. It's available directly from African Rights for about £8.95. You can find a similarly-themed ICRC report online (PDF).

This is an incredible book written by the brother of a volunteer who was shot, along with her Burundian fiancé, by rebels in 2000. In Titanic Express, he sets out to unravel the ongoing complexities of the Rwandan genocide which led to his sister's death, whilst coming to terms with his own grief. The Charlotte Wilson Memorial Fund continues to donate to projects in Rwanda in her name.

Another one that isn't easy to locate, but which sticks in my mind, is Making Sense: A Rwandan Story, which is a full colour art book. If you Google Image the title, you will see some examples. My favourite is at the bottom of this post. The original paintings have been donated to the Rwanda Government for exhibition in Rwanda.

Most people have heard of Hotel Rwanda, but if you're looking for a film, Shooting Dogs (Beyond the Gates) is a better choice. This one was actually filmed in Rwanda (you can see my old office!) and was made with the help of genocide survivors. You can watch the trailer on IMDB.

As an addendum, I would like to mention a work by a survivor of Auschwitz. Written with incredible compassion and insight, If This is a Man and The Truce explores first-hand the process of dehumanisation, and how one rebuilds a life after genocide. It's important to look at Rwanda in the context of a much larger, global, issue.

I hope this has provided a place to start for those who wish to read about Rwanda's history. If I've missed any, please do drop a comment below.

Blood Rose, or, to give its more probable title(s): Those Rosy Hours (at Mazenderan), has been picked up for print and e-distribution by Ghostwoods Books.

I have literally just signed the contract, and I'm extremely excited to be working with them.

This is an excellent result for seven months' worth of tippety tapping, and Ghostwoods are the first fair trade publisher I have ever heard of. Hopefully a trend that will spread throughout the arts industries.

This doesn't mean that I have left Green Sunset Books, you can still find me there too.

Since May 2013 I've been documenting the process of writing this novel, and you can read along via the Novel Idea tab at the top.

I will write more of an explanation of how the manuscript got from first edit to publishing contract shortly, but for now I just wanted to share this fantastic news.
at 18:53 1 comment:

I've been attacked by technology gremlins - and stupidity!

There I was, typing away the other day, when I paused to watch something on the telly. I sipped my brew, put it back safely on the table, looked down and saw tea - on my keyboard!

If you haven't already seen the NooooOOOOoooo!!! video, that's a rough approximation of my thought process.

Just FYI people, in such a situation (one where there is precipitation, rather than a motherboard-frying deluge), the correct protocol is:

Thanks to the glory of the internet, and Dad's beady eye for a bargain, managed to order a new laptop, which arrived promptly next morning.

In fact, shortly after I booted up Ishtar (I name all of my computers after deities, don't laugh!) and realised I should have named her Lazarus, because she'd risen from the dead.

Second time this has happened to me with a minor spill. Provided you turn the electricity off in time, so that it doesn't fry the circuits, give the keyboard a thorough drying out and leave to stand overnight, there's about a 50/50 chance your laptop will miraculously recover.

The only time it didn't work was when this wee muffin:

walked a full glass of water over the keyboard. Instead of Sula, I should have named her Sulis, as in Minerva.

Anyway. I now have a new laptop, and Ishtar has been gifted into servitude, transmitting iPlayer and 4OD to the telly. It's simple work, compared to writing a novel, but she seems happy enough.

Meanwhile, Pemberley, the hard drive that I had transferred everything to, promptly died.

One week old, and defunct.

Thankfully, I've got multiple back-ups of all my writing and business files. Several more than I had before my laptop and hard drive simultaneously died, because now it feels personal, as though something's out to get me.

Have you backed up your writing recently? The thought of losing everything I ever wrote turned me green at the gills. I'm sure I could come to some sort of zen acceptance of it if I truly had to, but with so many helpful devices such as Google Drive, DropBox, a 500GB external hard drive for £30... why should you ever have to?

When you think of all the hours you spend writing stuff, a couple of hours making sure you don't lose it all is well worth your time.

And, on that mother-knows-best note, I should have some exciting news shortly...