Some seriously disturbing news emerging at the moment:

Paypal has decided to abuse its considerable position by imposing their moral beliefs on the self-publishing industry, forcing Smashwords, Bookstrand and other sites to remove certain categories of erotica from their websites.


From the  Stop PayPal Censorship petition.

In an update, Smashwords recently explained:


I had another call with PayPal this morning, and as a result of that conversation I extended the deadline...by which authors, publishers and agents should voluntarily remove content that no longer fits the PayPal guidelines.


The mortifying part is the amount of hostility authors seem to be levelling at Smashwords for what they claim to be 'giving in to' PayPal's unreasonable demands (which I'll get to in just a minute...)


It's not so simple to just unplug PayPal. Their policy originates with the banks and credit card companies that power them, and if we want to continue accepting credit cards either with PayPal or any other payment provider, we need to understand from where this originates.


To illustrate, this isn't the first time PayPal has displayed a paternalistically patronising attitude towards what its users can and can't spend their money on. In December 2010: PayPal cuts Wikileaks access for donations

One might understand this had they been threatened by governments over something like 'supporting terrorist organisations' or other extremely loose and ambiguous legislation ending in unthinkable consequences, disappearances, and jail terms. Whether you agree with such legislation or not, you could at least sympathise with PayPal for being a victim of someone else's gagging order.

But, no. They very clearly state the reason as being: "a violation of the PayPal Acceptable Use Policy."

A policy which they, themselves, have sat down, discussed, and come up with.

That's the bit people need to shout about. Global economy, free market, competition - there isn't any in this case. It's PayPal or nawt. If we want to change the system, we need to campaign for a new one - a more ethical alternative in relation to freedom of expression.

If there is an alternative to PayPal, I'm now interested in finding it. My business relies on PayPal. So, like Smashwords, I currently need them. What I will do alongside that is continue to blog and shout, tweet, and Facebook my disagreement. After all, whilst you're still a customer you might get heard. Once you walk away, where's the incentive for them to listen?

Unless everybody walks away. If we're prepared to do it en masse, I'm in.

So, what are PayPal censoring and how?

Well, from what I've managed to garner (open to corrections here) - they're preventing users from purchasing certain types of literature from indie publishers, and they're threatening to cut services to businesses who fail to comply.

The worst part is that PayPal don't even seem to be able to define exactly what it is that they wish to ban. Again, Smashword explain:

My dialogue is continuing with them as I seek to achieve a less onerous, more sensible result. Today, they hinted at a willingness to consider a more relaxed definition of prohibited content as..."books for which rape, bestiality and incest are the major theme.  If rape, bestiality and incest are incidental plot points, then that content might be allowable."  This is a significant clarification in my ongoing attempt to delineate the gray areas and push back the onerous, unfair and restrictive definitions as they now stand.  It's an opening, but not the final word from PayPal.

Might be allowable? I'm sorry, but really - f*ck off PayPal. Oh look, I just censored myself.

Under that definition, my latest novel might be banned on two counts, as an 'incidental plot point.' My collection of short stories is a definite no-no.

Well, if I self-published a book on Smashwords that got pulled because it contravened PayPal's moral judgement, what would I do?

What any sensible author would do. I'd go and self-publish it on Amazon. No skin off my nose, but a huge punch in the gut for indie publishers like Smashwords, who end up being caught between a rock and a hard place: the ire of their authors for not making a stand, and the financial intimidation of a morally corrupt transaction company.

What on earth does this achieve, exactly? 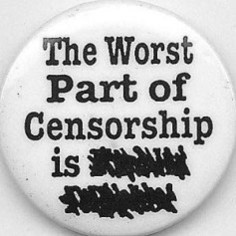 Went to see my cousin, Alx, launch her debut album as Hanging the Star at Bush Hall, London, the other day.


My dad's side of the family, who are ridiculously musical. Alx was at The Royal School of Music with my old Cardiff drinking buddy Gareth, who is a gifted composer. Her brother, my cousin Jimmy, now tours with Bad Ass Brass. When he isn't jetting around the world as a sesh musician, he's hanging out at places like Ronnie Scott's.

Meanwhile, I can just about manage Three Blind Mice on the tin whistle.

Alx has done some incredible work, including a cover of Tori Amos' Northern Lad, and Cigarette Song, which she recorded on Coldplay's piano!

Please do go and check out her website. Also, check out Kristy Clark, an Aussie singer who turned up to play a session. I especially love Dots and Dashes.
at 22:00 No comments: