Yesterday was extremely exciting. I went along to Cheltenham Literature Festival with family.

The highlight was Lionel Shriver, author of - most famously - We Need to Talk About Kevin. I have to admit to being rather a little star struck. She has phenomenal stage presence, and comes across as one of the most self-assured public speakers that I have ever seen. 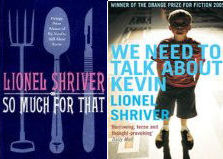 Her latest book is called So Much for That, a reproachful and personally charged look at how the American health service holds people to ransom during their darkest hours. The story was inspired by her own experience of the death of a close friend from cancer, at the cost of a two million dollar personal investment in treatment, despite having medical insurance. Apparently, in America, medical treatment is the highest cause of bankruptcy amongst individuals.

The book explores how this is possible in one of the most advanced countries in the world, and what price you can put on life. Are three more pain-filled months worth two million dollars of treatment?

Shep Knacker has been saving all his working life for a one way ticket to a cheaper, more restful escape from the daily grind. When he sells his handyman business in New York for $1 million, 'The Afterlife' seems tantalisingly within reach. Yet his wife has concocted countless reasons why now isn't the time to go. Realizing that Glynis has never been serious about taking the plunge, Shep announces that he is leaving for a remote island off the coast of Tanzania, with or without her. However, Glynis has an announcement of her own: she needs his health insurance.

Because his insurance only partially covers the staggering cost of her treatment, Shep's nest egg for his foreign idyll soon cracks under the strain. Illustrating how a marriage is both stressed and strengthened by medical crisis, So Much for That puts the uncomfortable fiscal question: how much is one life worth?

Enlivened by Shriver's signature acerbity and political outrage, it's surely the funniest and most entertaining novel about illness and death one's ever likely to read.

It was clear from the questions and answers session that the book has given Shriver pause for thought about the importance of her own health. She spoke of how she takes time now and then to appreciate what it's like to be able to walk down the street without being in pain, or to be able to think about other things because your energy isn't solely invested in getting through the day. It certainly gave everyone a reminder that health is your most important asset.

On a more humorous note, when asked why she was inspired to write Kevin, she replied that she was in her early 40s and wondering whether she would ever have children. She wrote the book to consider the 'worst case scenario'. She doesn't have children. But, as her friend told her, she did rather weight the deck.

It was an absolute pleasure to listen to her read from her work and speak about her life and interests. She creates an energy around her that charges the room.

It was also interesting, whilst talking to a lady sitting next to me, to note that the overwhelming majority of the audience were female. As one woman told Shriver, with Kevin she had broken the taboo for many mothers: that it was possible for mothers not to like their sons. And although not to such an extreme as Kevin, mothers do see negative behaviour in their sons from time to time. The impact of Kevin on many parenting forums was to open up the subject for mothers (and as Shriver pointed out, fathers also) to discuss these issues without feeling abnormal.

Quite an impressive feat. Let's hope that her work on the health service staves off the ConDem government's plans to open up the arena to American-style private health insurers.

Naturally I ran to the Waterstones tent afterwards to get my copy of So Much for That signed. Certainly a memorable afternoon.

Next, we headed over to see Ann Cleeves and Andrea Maria Schenkel, both highly acclaimed crime writers, being interviewed by The Observer's crime fiction critic, Peter Gutteridge.

Again, a thoroughly entertaining hour. Cleeves talked of her love of Shetland and how she set out to write Detective Inspector Vera Stanhope as a real woman, someone who isn't glamorous or single by choice, but believable. Brenda Blethyn will play Vera in a TV adaptation early in 2011.

Schenkel spoke of the inspiration for her latest novel Bunker, coming from a trip to an underground bunker in her native Bavaria where it was so black that you couldn't see anything at all, causing her to panic. She also spoke of the strange acquisition of a human skull which she keeps at home, found by her husband in a mound of building dirt. Well, what would you expect from a crime writer?

I really found myself identifying with Cleeves as she spoke of her horror at being asked to produce synopses for a quartet of books. Her natural writing style is to sit down and start typing. The story comes as she writes. In the BBC interview Five Minutes with Ian McEwan, he also describes this method of working, stating that:

"My stories tell themselves in the writing, it's only by writing them that I discover them."


It's nice to hear other people talk about their writing in this way, because it's the same way that I write. There seem to be people who plan meticulously, and people who just sit down and write - both produce novels, it's just a different process of working.

Cleeves also described genre fiction, specifically traditional crime novels, as being like a 'vampire'. Once you've written one, you have to keep writing them to feed your audience. She praised the work of current writers from other countries, as well as Schenkel herself, for writing crime in different, imaginative ways that allowed native British writers to break away from set, traditionalist crime structures.

Listening to both Shriver and Cleeves talk about how hard they found it to get published, and having bumped along the bottom of the 'mid-listers' for so long before gaining serious recognition, was reassuring. But Shriver in particular gave me courage. I write literary fiction, rather than commercial fiction. I was told by one agent when submitting a piece of work that:


I believe 10 years ago my response would probably have been different, but I'm afraid I am regretfully going to say no to representing the book. The market for literary fiction has contracted alarmingly over the past few years and it has really become very difficult to find good publishers for fiction like this, the reason being that the publishers find it so hard to sell.


But you see, it's a 50/50 game. Sure, you may be far more likely to find representation and a publisher for commercial fiction - your crime series, rom coms, and mystery trilogies. But once you do, you're stuck in your genre.

With literary fiction, you only have to hit it lucky once, and you still retain your freedom.

Finally, we rounded off the night with Conjure Tales, two of Britain's greatest Afro-Caribbean storytellers: Jan Blake and TUUP. They're part of the UK Storytellers circle called the Crick Crack Club, and they are outstanding. The event was billed as:


...a thunderous exploration of sorcery and shapeshifting. Working with the magic of contraries, these are disturbing, terrifying, humorous and poignant tales of the ghosts, duppies and conjure folk that haunt the Caribbean and the Americas.


It was indeed stonkingly good fun. Two hours of the finest ghost stories and cautionary tales, accompanied by traditional instruments and plenty of memorable facial expressions.

It was also really touching that, amongst the piles of signed copies and reading tents, homage was being paid to the oral traditions from whence all of this began.

Check the above website for events. If you get the chance, go see them!