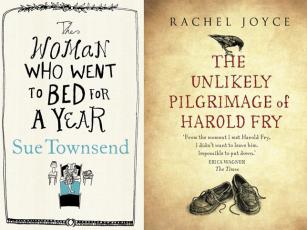 Last night we headed to our penultimate talk of the festival: Sue Townsend and Rachel Joyce.

Townsend won the heart and minds of the nation back in 1992 with her novel The Queen And I, which saw the royal family relegated to a council flat after the People's Republican Party won the general election.

She's also more than a little well known for her Adrian Mole series, of which she's writing another. He starts off aged thirteen and three-quarters and is, by now, around forty. That's quite an incredible feat of writing.

Joyce is a radio writer, and Harold Fry is her debut novel.

Whereas Townsend has just written a book about a woman who goes to bed for a year, Joyce has written a book about a man who decides to walk the length of Britain. An emotionally repressed English gent who, on receiving a letter from a dying school friend requesting he visit, realises, at the post box, that the reply 'I'm sorry' isn't quite good enough. So he decides to walk to her, in nothing but the clothes he stands up in.

It transpires that, at the time of writing, Joyce's own father was dying. She began writing in much the same vein as her character starts walking, with the hope that by doing something so irrationally focused, he (or in Fry's case, she) might keep living.

That was rather a silencer. A very profound and understandable place to start a story.

Townsend, when asked whether she still 'caries a lot of anger,' replied 'yes,' and went on to cite an incident in her childhood which typified class divide. She won a place at grammar school, but the uniform alone was three times what her parents earned, so she couldn't go. To which the interviewer said that the exact same thing had happened to his own mother. A system set up to show token equality whilst ensuring the working class never left their posts.

None of us had expected to see Townsend in a wheelchair, or blind. When asked whether the loss of her visual world had impacted on her writing, she said that it hadn't really, because she had a lifetime of memories to draw from. She could still imagine facial expressions clearly, and could recall more now that she had the time to think about it. Her son helps her to write, but the one thing she does miss very much is reading. She said that she still buys books, to encourage new authors.

I would like to read both books, and I am often annoyed with myself for being such a slow reader. They may have to wait whilst I continue through my current reading pile, but I hope to get there some day.
at 16:19