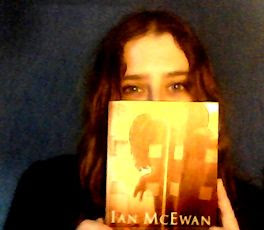 Last talk of this year's festival for us. What a way to end.

McEwan (Atonement, Enduring Love) was wonderfully entertaining. He had the audience laughing out loud for the first half, regaling us with stories about the English syllabus.

He said he'd prefer to be read voluntarily, but having his work on the reading list for students had led to some entertaining moments - especially when his son had to write an essay on Enduring Love. He picked it up and read the opening line: "In his book, McEwan..."

"What happened?" he asked. "You always used to call me Dad."

Apparently he did help him with one essay, which received a D. This prompted him to tell a wonderful story about Tom Stoppard, whose son wrote about his father's work for his course and received an F, followed by the lines: "You have clearly failed to understand the author's intentions."

He says he thinks the York Notes in study editions are great, because they summarise each chapter - you don't even have to read the book. He says he often reads these notes in his own books, they've helped him realise that he hadn't understood himself at all!

On the topic of social media, he says 'life's too short.' He calculated the other day that he probably has around a thousand weeks left to live, why waste them on tweeting? He also said that he took a break from the public eye for about three years, as he realised that the mystery of an author increases the less you say. Suddenly people become interested in you.

Thankfully he's stepped back into the limelight to promote his new book Sweet Tooth.

He said that he never gives books to friends, and went into the different experience readers have when reading a book by someone they know, or are about to meet. How the temptation is there to look for clues to that person's psyche in the book. He's right. Both from friends telling me how much of me they see in my books (one once telling me that Phoebe in Georg[i]e was me! - damn, and I wanted to wear the dapper suit.) and because I'm currently reading a book that an author gave me, and I do find myself wondering which parts of himself are embodied in which characters, and where he lived the experiences he draws upon.

McEwan calls this an 'embarrassingly intimate' issue. I understand that. It's excruciating to think that anybody would be analysing my mind on the basis of a work of fiction. Although, I often repeat the saying 'fiction is selective reality.' He calls this habit of looking for an author's personality within passages 'vulgar yet forgivable.' I'm not sure it's something you can consciously stop, though.

On the topic of writer's block, he now terms this 'useful hesitation.' Especially during the first 5,000 words of a new story, where you're pausing to make sure that the tone is right. I'm currently 5.6k into my next one and, for the first time ever, doing what he describes. I usually storm ahead to at least 30k before block hits. Perhaps if I take more time over the tone it will start slowly but keep rolling.

I love the topic of novellas, because authors always have such fun things to say about them. Check out my post on King's Different Seasons for a giggle on that count. McEwan, conversely, is a huge advocate of writing novellas, but agrees that the literary world tends to sniff down their noses at them. He feels that novellas force the writer to be focused and concise, leading to better prose and a complete story that you can hold in your mind all at once. He considers novellas the 'supreme literary form.'

He also recommends that new writers write short stories. He says it's a great way of getting all of the influences out of your mind in order to find your own feet, and better to write a bad short story than waste years writing a bad novel. Not, he emphasised, that short stories themselves are necessarily always bad. He should know, he is a master of the short story.

I must admit, Splintered Door was my way of clearing my palate; of trying all the things I wanted to try and, as I've heard many authors refer to this week, attempting at least one pastiche.

There were so many other funny anecdotes, not least the Italian interviewer asking the one question you can never ask an Englishman: 'McEwan, what is love?' He really was a pleasure to listen to.

I must admit, I had a little gush at the signing table.

I took up a copy of First Love, Last Rites. Couldn't help sharing the fact that "Butterflies is the most memorable short story I have ever read."

"That is the darkest thing I ever wrote."

I'm sure he knew that already, and has been told many times, but I've never forgotten that one. It was the first time that I realised quite how clever a story could be at splitting a reader between what they know, deep down in their soul, and what they want to believe.

If you haven't read it, it's in that collection. It's unmistakably disturbing, but I wager you won't forget it either.

Incredibly privileged to have my favourite short story signed by its author.

It's been a fantastic festival from start to finish this year. You can catch up on everything using the Literature Festivals tag or go to the festival roundup post. Looking forward to the next.
at 18:01