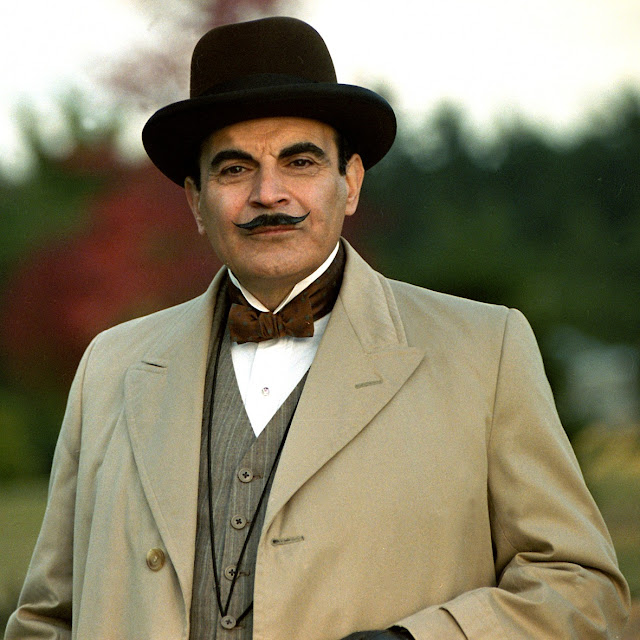 What a wonderful, wonderful treat!

The incredible David Suchet, best known for his role as Hercule Poirot in Agatha Christie's Poirot. One of the leading lights of British film, television and theatre.

Parked in a very period setting, round the back of Cheltenham Ladies' College.

Popped into Waterstone's to pick up some copies of Philip Pullman, who was on after Suchet. We wanted to be ready for the signing. Unfortunately we experienced the Waterstone's CheltLit Saga.

Then we raced over to Cheltenham Racecourse to see the lovely Mr. Suchet.

I grew up watching Poirot. Aged eleven, last year of primary school, we had to write 'a day in the life of' someone we wanted to swap places with. I wanted to be Poirot. It's funny to think that David Suchet has been on our screens all that time.

It was such a pleasure to get to see him. I'll never forget the penny story. He was asked how he managed to come up with Poirot's distinctive walk. He explained that, whilst researching for the part, he came across Christie's description of his 'mincing gate'. He racked his brains to work out what a mincing gate would be, and he remembered Laurence Olivier having to employ one for his role as Lord Foppington.

Olivier apparently did this by placing an old penny between his buttocks and clenching.

At this point, David Suchet stood up and did an approximation of how one might walk if one had a penny clenched between their buttocks.

Instantly, it was Poirot standing there.

I almost squeeed with delight!

He explained that he became an actor in order to serve playwrights, and payed huge service to writers as creators, necessitating the business of acting. It was really nice, having heard in the previous two talks about the film industries' large disregard for writers, to hear him give such great acknowledgement. He said that he'd always had a fascinating interest in writers, because writers have no voice without actors. This is where the idea of 'serving the playwright' came in: "the more writers' work I do, the more fulfilled I am as an actor."

Although, he did admit to being a rather difficult actor to work with on Poirot, and having upset several writers by refusing to 'allow Poirot out of the box that Agatha Christie put him in.' He said that although he was Poirot, he was, above all else, Agatha Christie's Poirot. This met with huge applause.

Another line that was met with mass enjoyment came in the form of a female member of the audience who asked: "Ms. Lemon - were you never tempted to give her a little encouragement?"

Once the laughter had died down, Suchet leaned forward and in a thick, deep voice, replied: "What makes you think I didn't?"

It was a brilliant moment. Then he went on to explain that Poirot simply didn't notice these things. Despite regretting never marrying or raising children, it just wouldn't have occurred to him that she was flirting.

That was sad. Not as sad as when he explained that he was currently filming the last ever, ever, ever Poirot. Apparently it's rather a sad ending, and there can never be any more after this. Christie wrote him out as an old man, alone, with terrible arthritis. I don't think I wish to watch this when it airs.

Just as an aside, in case you were wondering - Suchet himself is an extremely charismatic speaker and, despite looking a lot like Poirot (oddly enough), he doesn't sound like him at all. It was only when he did the Poirot walk that it clicked into place. He's also heavily padded in the series, wearing what he refers to as 'the armadillo,' cut layers of fabric that move like folds of fat. Ew.

Sadly, we had to take an early departure as Pullman was on next and traffic back into town was horrendous. We missed the last couple of questions, but I feel so privileged to have seen him live. He really is a national treasure and an incredibly, incredibly talented actor. 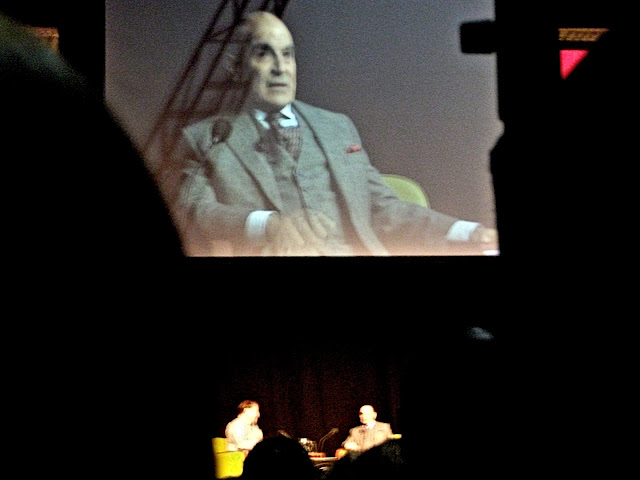