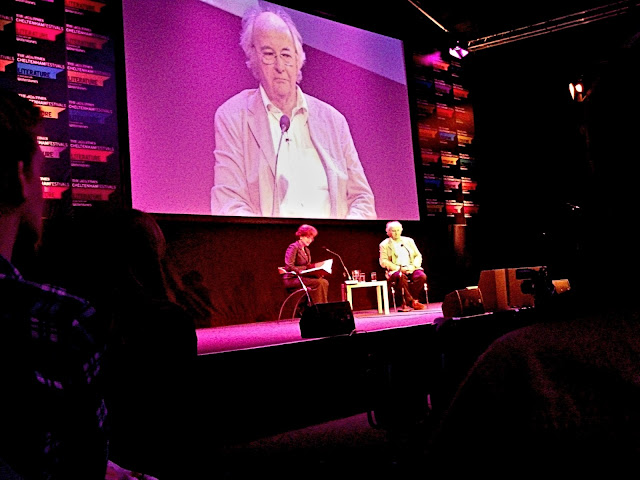 Excellent seats for Philip Pullman, author of the Northern Lights trilogy, and some of my favourite YA: The Ruby in the Smoke series. He writes kick-ass female characters.

He was here promoting his latest work, a retelling of fifty of the Grimm fairytales. Happy to say we now have a signed copy of that and I'm hugely looking forward to reading it. His 'Fifty Shades of Grimm,' as he put it.

I made loads of notes on this one, so it's likely to be a lengthy post but, honestly, how often do you get to see such a grand master of literature speak?

The first thing I noticed about Pullman, is that his hair has grown. You're used to seeing him in publicity shots with short hair, but the white tufts he now sports make him look altogether folkloric.

He opened by explaining that he's had a lifelong interest in fairytales. Partly because the characters within them are never ambiguous. They aren't like you or I, in the way that literary characters are. They are flat and two-dimensional. It's the story that we engage with, and which becomes psychologically interesting.

When asked why we seem to have lost the ability to invent fairytales, he offered a very interesting theory, which was that families became divided. Once upon a time, the whole family would have sat around the table listening to stories. Children would have understood it on one level, whilst adults would take other meanings from it. Then, over time, family activities became split into childish things to do, and adult ways to pass the time, so families stopped listening to stories together, and storytelling became largely a children's pastime.

I'd never thought of that before.

He repeated an old saying from oral tradition that: 'A story isn't beautiful without something added.' Meaning that stories aren't supposed to remain static forever, but that they grow and change, shaped by their teller.

Some examples of the organic nature of stories unfolded later, when he explained that, in the original stories, Cinderella never had a godmother. Similarly, no one ever kissed a frog to turn it into a prince. In the older versions, the frog slept on the Princess's pillow. She became annoyed with him, threw him against the wall, where he splattered and ran down it, miraculously forming a prince. Except in the British version, where she cut off his head.

This prompted a very strange question from the interviewer as to whether these stories originated from more 'primitive' pagan stories, rather than Christian ones? The assumption there being that pagan cultures were primitive, whereas Christianity is ultra-modern, perhaps? Strange phraseology.
Or perhaps I was simply hearing that through one of my 'internal filters', which Pullman went into in depth with the lovely example of Wuthering Heights. You can see it from a feminist perspective: the subjugation of women, or perhaps a Marxist perspective: master and servant, or even a post-colonialist perspective: the 'dark-skinned slave'. We're filtering stories all the time. Truth is a 'fog' through which we see the shapes that are most familiar. The ones we are looking for. Not that those things aren't there, but perhaps they were not included consciously.

I became particularly interested when he started to recount a couple of fairytales. One was about a man who claimed to have 'killed many,' but this turned out to be the number of flies he had swotted.

This caught my attention because it is the story of Kaj Nazar, or Nazar the Brave.

The idler Nazar, who only used to count flies that he had killed, suddenly appears on the throne as a result of the ignorance of people and the guile of the priest.

I have a little stuffed toy of him which I bought for my nephew at Garni Temple whilst working in Armenia. I'm greatly fascinated by the diaspora of stories: where they start, how they mutate, and where they end up.

Secondly, and more disturbingly, he brought up one that I was trying to remember a while back, called Allerleirauh.

Also known as The King who Wished to Marry His Daughter and from the French tale Peau d'Âne, apparently...

A king promised his dying wife that he would not marry unless to a woman as beautiful as she was, and when he looked for a new wife, he realised that the only woman that would not break the promise was his own daughter.

The daughter tried to make the wedding impossible by asking for three dresses, one as golden as the sun, one as silver as moon, and one as bright as the stars, and a mantle made from the fur of every kind of animal in the kingdom. When her father provided them, she took them, with a gold ring, a gold spindle, and a gold reel, and ran...

I never did find the book of fairytales it was in. Still looking. But what surprised me was that Pullman brought this story up as two separate stories. Firstly, as Thousandfurs, the story of the king who wished to marry his daughter. Secondly, as an English fairytale, Mossy Coat, who had three dresses made.

Now I'm really intrigued. How did these two separate fairytales merge as one? Or were they always one, that became separated? Answers on a postcard...

That's the sort of thing that will keep me up at night.

An American lady in the audience told of having to hide these books from her Christian parents. I would have liked to have heard more of what she thought about the story.

When asked what his daemon would be, Pullman reckoned on a crow, a rook or a raven; something from the Corvus family. He suspected it would probably be a Magpie, because he steals bits of ideas to make stories, 'it doesn't matter whether it glitters because it's silver or tinfoil'.

He had a similar look on his face to Sabastian Faulks when asked what he thought of the Hollywood treatment of The Golden Compass. Although, unlike Faulks, he felt that the casting had been superb. It was more the fact that 'they didn't understand what they'd got hold of.'

When asked the same question as Faulks as to whether he would let Hollywood anywhere near his work again, he was refreshingly honest and quipped 'it would depend on the size of the cheque.'

Some last, lingering trivia: he absolutely hates adverbs, philology is the study of language, and, like me, though more successfully, he put aside his first novel in order to write a second one that would sell, before returning to the first. That seems to happen rather a lot.

I'll round up with a lovely line he gave: "Find the type of storyteller you are, and be it for all you're worth."
at 21:20