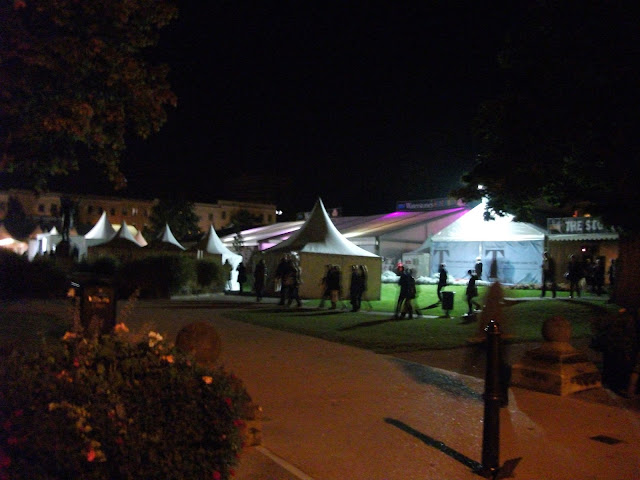 After Terry Pratchett, we adjourned to a lovely pub down the road for a drink and a meal. By the time we returned to the festival, night had fallen.

Our final speaker of the day was Jenny Agutter, most famed for her role in The Railway Children, and later Logan's Run. Currently appearing in Call the Midwife as Sister Julienne.

Listening to Agutter, she seems to have led a blessed career. Not least that her parents supported her choices, but also in the range of choices she was offered. Having travelled as the child of an army officer who later went into organising entertainment for the troops, she was then discovered by none other than Walt Disney, aged eleven, and went on to land a starring role in Walkabout, jetting off to Australia.

Although she herself quit school after studying ballet, to pursue a career in acting, she says that she absolutely wouldn't recommend that route to anyone else. She highlighted that part of the problem with acting as a career is that it can 'dry up at any moment.'

Question time was entertaining, at least two male members of the audience began by admitting to having been 'a little bit' in love with her in their youth.

It was nice to hear that in 2000 it felt like coming full-circle to play her own mother in Catherine Morshead's retelling of The Railway Children. She said that some actresses might have found that uncomfortable but, for her, it was a completion to watch another young actress playing her part, doing what she had done at that age. Mirroring the way that life, and families, go on.

Another hugely entertaining anecdote she told involved one of her heroes, Sir John Gielgud. She was appearing in Peter Hall's production of The Tempest at The National in her early 20s. She was due to make her entrance, playing chess with a fellow actor, up through a trapdoor in the stage. Only, during one dress rehearsal, the trapdoor opened and Sir Gielgud landed on the table between them!

Apparently he got up, shook himself down and walked off, leaving the two young actors gazing after him in surprise.

It would appear that the actor, Dennis Quilley, also remembers that incident.

Agutter just comes across as this incredibly bubbly, positive person. Despite what she may say about acting, nobody would inspire you to run off and join the theatre more.
at 23:47