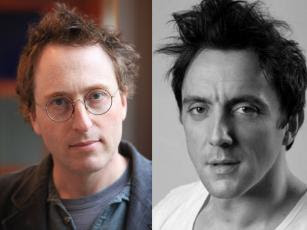 Mad dash to Gloucester to pick Marilyn up from the station. Headed to a pub for food en route back to Cheltenham. It was pouring down. Half thought about heading home, but had tickets to see Jon Ronson and Peter Serafinowicz.

I didn't know much about Jon Ronson, though I did go 'ah' when I learned that he wrote The Men Who Stare at Goats. Not because I'd read it, simply because I'd heard of it and knew that it was made into a film.

Conversely, I absolutely knew who Peter Serafinowicz was. I'm a huge Black Books and Spaced fan. You only have to mention his name for me to lose the battle of self-control and start huskily intoning 'Fraaaaan? Fraaaaan?'

We were fairly close to the front of the queue, which was lucky as it was p'ing it down outside and they had to snake everyone in and around the Waterstone's tent. We were apparently kept waiting because of a sound check. Yet, the microphones were catching feedback the whole way through the event. Later, whilst queueing for David Suchet at the racecourse, I heard a guy behind us say to his partner 'I wonder if we're waiting because of that bloody sound engineer again?' He's become rather a mythical presence, this faceless sound engineer. Responsible for every delay and mishap.

It was incredible to see the crowds. This is the major thing about the Cheltenham Literature Festival - it really does attract masses of people, all crazy about books. Such a moving spectacle. 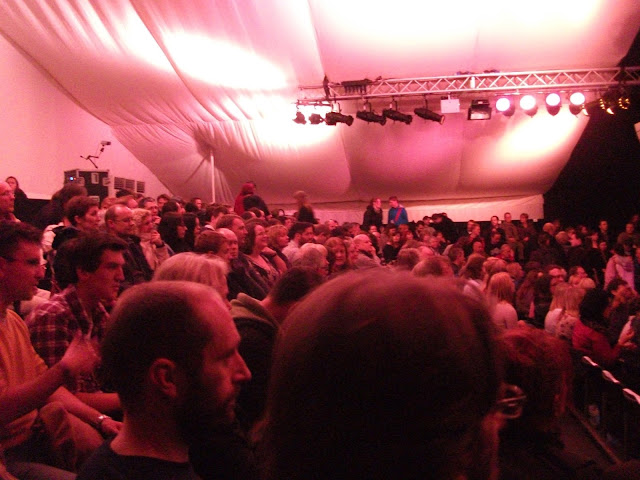 Ronson started off by giving an extremely entertaining reading, I think from his book Lost at Sea, about his kid learning to swear. It was very funny. I quickly realised that he's this year's Christopher Brookmyre for me, in that I didn't know who he was when it started, but I certainly won't forget now. He was absolutely brilliant. I'd like to go off and read everything he's ever written, but it may be a while before I clear my current charity shop/booQfest/CheltLitFest reading lists.

Peter Serafinowicz is extremely tall and rather handsome, though he does tend to answer a lot of questions with 'I don't know,' before going on to consider them. His impressions of Terry Wogan and Paul McCartney were uncanny. And he told a funny story about starting a meeting in the style of McCartney and then being unable to find 'an exit point,' so having to carry on.

They made a great comedy duo, though they also touched on some serious points, especially Ronson who undertook fairly hefty undercover research, including living side-by-side with Taliban extremists in a life experience not dissimilar to Four Lions.

He told a story about working for himself, which made me sit up. Apparently Ronson once worked for a radio station that went bust. One day he and his colleagues came in and, one by one, they were called into the Manager's office and fired. He said it made him realise that this person had such control over his life: whether he worked or didn't, whether he had money, whether he was happy, that he refused to ever let that happen again. Now he says he always has five careers on the go.

Having been in those situations, with some fairly horrendous mis-Managers, and now being happily self un-employed, I think I would find it very difficult to go back to a 'yes, sir,' 'no sir' environment. It certainly does make you resourceful.

Another thing that seemed to be a carry-over from Faulks' talk, was how little input Ronson had on the film adaptation of The Men Who Stare at Goats. Not only that, but how miserly studios are towards the very people whose material they are using. For instance, Ronson had to pay his own flight out to the film set, and Serafinowicz, who was the voice of Darth Maul, had to do similar to attend the Star Wars premier. How miserly can you get?
at 00:50