The Strong and the Dead 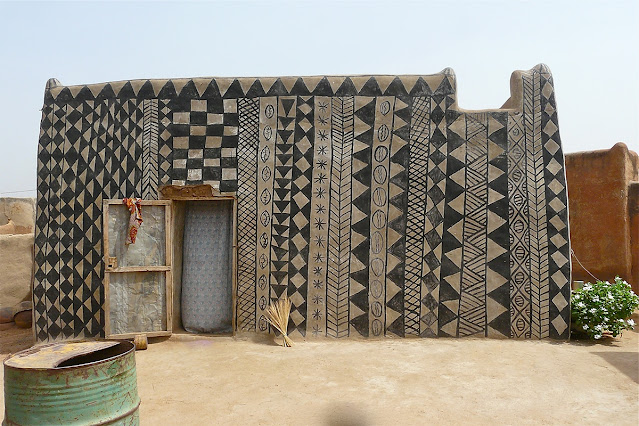 This post is a continuation of my earlier post Origins of Imigongo, which explores whether there's a connection between the above art in Burkina Faso, imigongo art in Rwanda, and the cone temple at ancient Uruk. You can follow that post link to catch up. 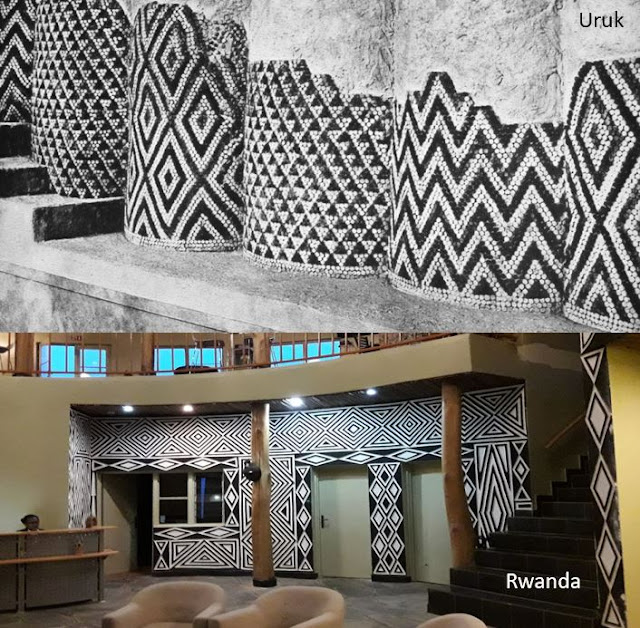 Last night, my friend, poet Audrey Haney, sent me a link to this article: Photographers Gain Entry into Traditional African Village Where Every House Is a Work of Art

Some incredible pictures, and the striking thing is that the colour scheme of red, white and black matches that of both Uruk and Rwanda. 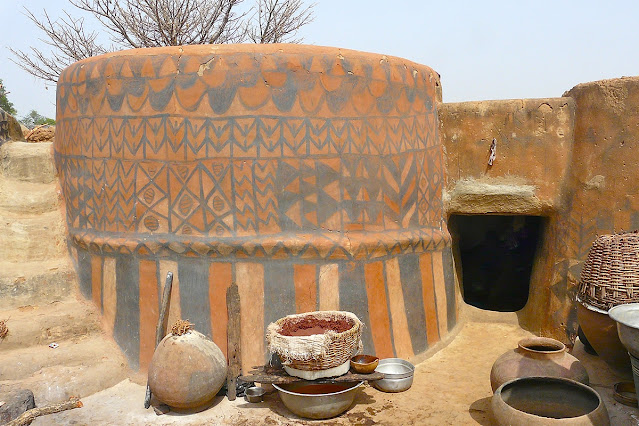 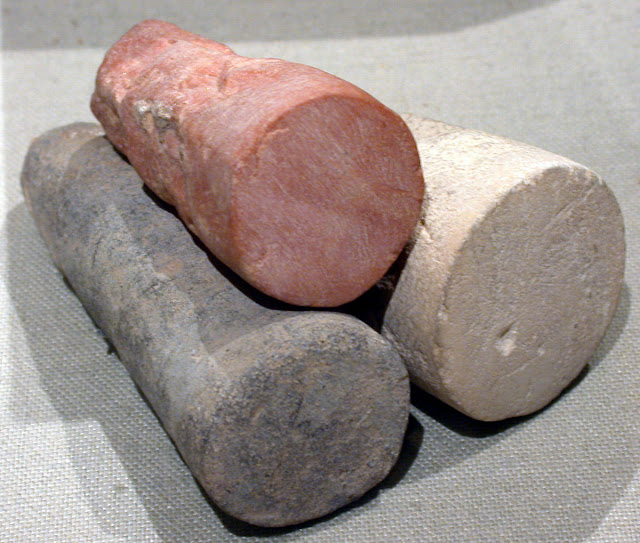 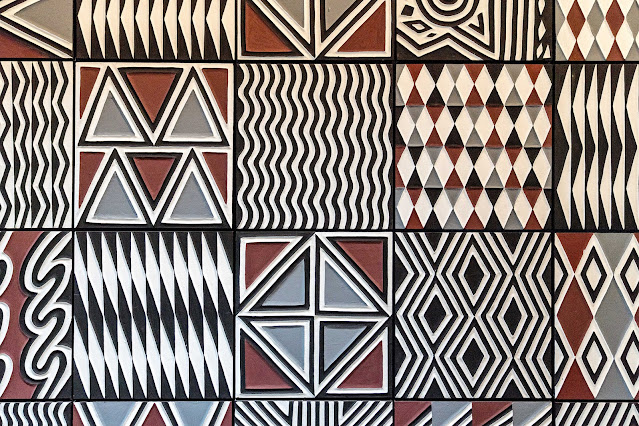 All of the patterns at the cone temple are found, fairly identically, in Rwanda, though there are more patterns in Rwanda than appear in the pictures of Uruk. There is also a greater difference between Rwanda and Burkina Faso, both in the types of pattern and the exactness of their appearance. Rwanda and Uruk are both extremely exact in their symmetry, whereas the patterns found in Burkina appear more freehand. They have more of a feel of Ubaid art about them, which comes from a much earlier period in Mesopotamian history. The cone temple was built over an existing Ubaid temple, and a torch left burning there for the previous gods. I thought this maybe backed up the idea of an earlier Ubaid art migration over the lip of Egypt to West Africa. Meanwhile, in Uruk, the Sumerians maybe developed those patterns into something more exact which migrated across the shorter Yemeni route to Ethiopia, along with the Semitic language varient, and down to Rwanda.

The article says that the photographed village, Tiébélé, was settled in the 1400s by the Kassena people.

Falling down that rabbit hole on Wiki:

The Kassena people are part of the greater Gurunsi group and were separated from the Gurunsi ethnic group at the beginning of the 20th century...

And, when you look up Gurunsi, you discover:

The Gurunsi, or Grunshi, are a set of related ethnic groups inhabiting northern Ghana and south and central Burkina Faso... Oral traditions of the Gurunsi hold that they originated from the western Sudan passing through the Sahel. While it is unknown when the migration occurred, it is believed that the Gurunsi were present in their current location by 1100 AD.

If you Google Image 'Gurunsi people,' you find lots more of this type of art.

So, if we cling to the migration theory, perhaps an earlier migration of art out of Uruk, heading west through Sudan to West Africa, and a later one down through Ethiopia to Rwanda? 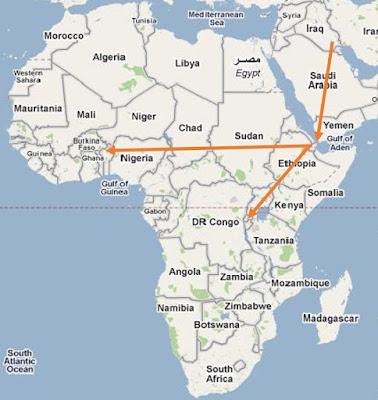 That seems a likely link.

However, as I mentioned in the last post, Uruk was completely abandoned, and the temple most likely destroyed or buried, by 700 AD. If the similarities between Burkina Faso and Ubaid art are true, then that first migration may have been as far back as 3,800 BC or earlier, as the Ubaid period lasted from around 6,500-3,800 BC.

The cone temple, that more closely resembled imigongo, was built over the Ubaid temple around 3800–3400 BC, which is when the second migration may have occurred.

I mentioned before that it would help to find more evidence of this style of art along those two routes, but tribal migration was very fluid in Africa even as recently as 200 years ago, and many of those countries, such as Sudan and Chad, have undergone massive upheaval and instability over the years, so it's likely that nothing much would remain of a tribe that was passing through.

I still strongly believe that the comparison between Uruk, imigongo and Kassena/Gurunsi art is just too close to be coincidence, and there's plenty of migratory potential there to connect them.

And I'll leave you with another mind-bender.

In the article about Tiébélé, there's a line:

Stavrakis recounts their experience, explaining how before they arrived they were even given a dress code: “We were told in advance that we must not wear anything red and we may not carry an umbrella. Only the chiefly noble family is permitted that privilege and to do so would constitute a great affront to our hosts.”

On the very first page of my notebook whilst researching Akkad, I copied down an ancient Mesopotamian saying that I stumbled across:

When walking with the strong or the dead, do not wear clothes of purple or red.

Considering that Tiébélé is a city of kings and mausoleums, that seems hauntingly reminiscent of the ancient past. 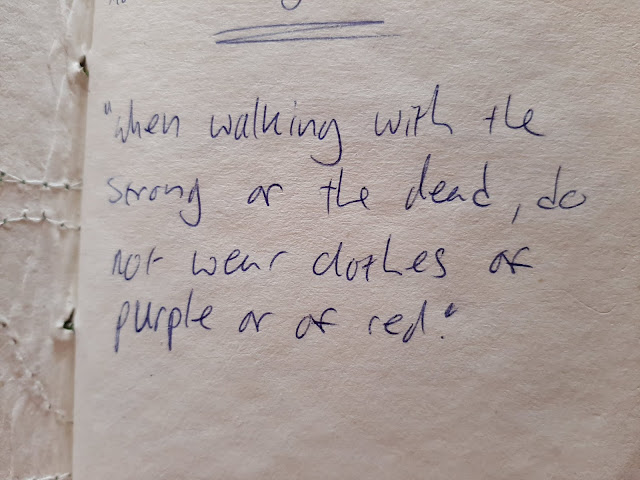