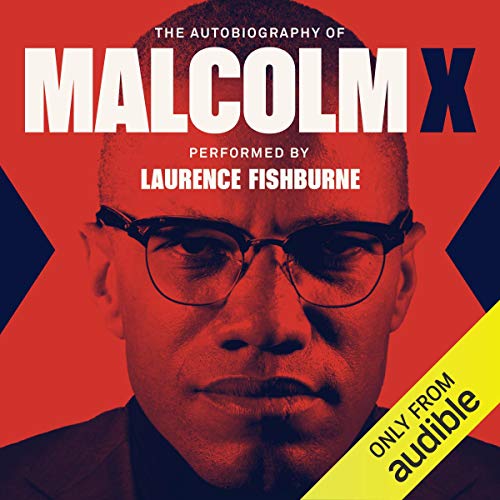 After reading Natives by Akala, I thought I'd have a look at the autobiography of Malcolm X:

Experience a bold take on this classic autobiography as it’s performed by Oscar-nominated Laurence Fishburne.

In this searing classic autobiography, originally published in 1965, Malcolm X, the Muslim leader, firebrand, and Black empowerment activist, tells the extraordinary story of his life and the growth of the Human Rights movement. His fascinating perspective on the lies and limitations of the American dream and the inherent racism in a society that denies its non-White citizens the opportunity to dream, gives extraordinary insight into the most urgent issues of our own time.

The Autobiography of Malcolm X stands as the definitive statement of a movement and a man whose work was never completed but whose message is timeless. It is essential for anyone who wants to understand the African American experience and America as a whole.

I have to admit, I really didn't know anything about Malcolm X before I started reading. I knew he was a black rights activist in America at the same time as Martin Luther King, and I knew that he was assassinated, but beyond that, not a lot.

This book was quite a journey.

I felt a bit guilty. I love Laurence Fishburne, but I did speed up the recording in places. I didn't realise Malcolm X was so fanatical about Islam, and it just got a bit repetitive at times. I'm not religious, and I'm inherently suspicious of people who have to consult a book for their moral compass, and claim that their way is the right way above all others. This idea that Islam is the 'natural religion of the black man,' begs the question 'more natural than native African religions, like Vodun?' and that Islam is the only religion that ever stood up to Christianity - with no concession to Hinduism, Buddhism, Jainism... I absolutely share his concerns about Christianity, but I also have concerns about Islam. It doesn't have the all-embracing peaceful past he seems to suggest it does. The unity of brotherhood didn't extend universally between Shia, Sunni and Isma'ilis, with their golden dagger assassination guild. Still, it was more egalitarian, in that the colour of your skin certainly didn't prohibit your right to hold a gun. I just feel exceedingly uncomfortable with cults of personality, and the Muslim Brotherhood certainly seemed a little bit culty.

Which brings me to the next bit. 'White devil,' doesn't bother me. I fully accept where that comes from. But his opinion about women was tough to take at times. Made worse in that he seemed to believe himself respectful of women, whilst at the same time berating women for the way they dress, explaining that women don't lead him - he leads women, proclaiming how few business women he respected (because there's only one he ever listened to), and feeling certain that his wife would have no problem changing her thinking to match his.

But, we have to remember this is the 1960s, and male chauvinism is alive and well today, so why not then?

It was just hard listening as someone with a double-X chromosome.

So, there was a lot I wasn't too into with this book. The reason I like Natives is because it opens up a dialogue and gets people thinking, whereas constantly shouting 'white devil!' at people isn't going to start a discussion - though I fully understand why he did it, and that he didn't believe discussion was getting anywhere. Fair enough, but that made it a 17-hour lecture on what he thought, and what he thought you should think.

It was also a bit contradictory in places. At the beginning, he started out saying something like 'I'd never look down on any other negro,' then went on to look down on younger black men (in the next paragraph), any black man who was Christian, any black man who bought furniture on credit, black women in Angola, and any black man who didn't convert to Islam. For a man who was all about black power and equality, he went on at uncomfortable length about how lovely it was to be waited on by servants when he visited Africa. I get it, life is complex, but a little questionable on phrasing there.

What kind of changed it for me was watching the documentary, Who Killed Malcolm X?, on Netflix halfway through. Actually hearing what he meant to people and how he'd affected people's lives, and hearing him speak in person, put everything into context a lot more. He really was extremely charismatic, and you could see exactly where he was coming from and why he took the approach he did. I'd maybe recommend watching that before reading the book.

The thing is, I really enjoyed the beginning of the book and the end of the book.

The beginning stands as an incredible historical record of Harlem and Boston in the early 1940s. Really brings it all to life.

And the end was just very nicely surprising.

If it was fiction, you'd say it had a good story arc. The things I found troublesome throughout the book were resolved by the end. For example, there's a point in the book where he explains how he reduced a young white woman to tears when she asked what she could do to help the black struggle. It was a bit of a dick move, and he did admit that towards the end of the book. I also noticed how, at the beginning, he casually mentioned he'd been to Africa and other countries, but then devoted no time to explaining what that was like. But he circled round at the end of the book to cover that in detail. Travel - as it does most people - had a massive impact on him. It was the turning point where he realised 'not all white people are devils,' and there was a poignant moment where he discusses how the American system is the cause of such toxic racism in white people. Similar to how the race/class system in the UK encourages skinheads and xenophobia. We are often products of our environment. I mentioned in my review of Natives how that inability to talk openly about race is less of an issue in Africa, which is what he found, too. And I completely agree with what he's saying - that everyone should get the chance to travel and to go to countries where, for a black person they're the majority, and for a white person they're the minority. Live that way for a while. See how different things can be, and how, after the initial shock, you realise people are just people. Some are dicks, some are outright hostile, but most are generous, funny and kind. It's not a specific skin colour, religion or culture that creates that, though politics can quickly cause divisionism.

I don't agree with the idea of fixing things being to have black-only states, which would also imply white-only states. Maybe it would have been an interim fix. But I think putting up those barriers then makes it so hard ever to overcome them again in the future.

I think the world is changing, but slowly. It's a generational thing. I think you can't underestimate the power of entertainment. The media can get lost, but it's television and movies that change things. Sometimes they push boundaries, such as the first interracial kisses on screen in 1959, and later in 1968 on Star Trek. But entertainment also reflects what the public wants to see. Look at the number of shows on Netflix nowadays that just have LGBT cast members and people of all colours and backgrounds as a matter of course. It's not controversial anymore. In fact, we notice if a film or a series doesn't have a diverse cast, because it's no longer representative of the norm. Popular culture in many places is not becoming more segregated, but less so.

People from different cultures and races frequently live together, marry, have children. In the 1980s it was unusual in the UK, but forty years later, it's a lot less so. Yes, there are still issues around race, religion and basic human empathy, but we are getting there. And if we do, fully, then we'll have an integrated world. I do think that's the way forward.

Race, gender and sexual orientation still have a long battle ahead, but it is working. Not as fast as any of us would like, but little by little we're getting there.

So, Malcolm X. For me, a little bit heavy on the 'white man's the devil,' and 'god is great,' and a smidge overdone on chauvinism, but it was the 1960s and he did seem acutely aware that he was about to be assassinated, which was bloody awful, so I don't think you can hold any of that against him.

I think he did a brilliant job at showing that you could be loud, proud and black, and not to take any shit. Which was - and still is - an excellent message. Maybe it would have reached more people if it didn't hinge on religious conversion at the same time.

I think the sadness is, he sort of realised that by the end, and it would have been really interesting to see how his approach changed from then on, and whether having so many daughters would have opened up his thinking towards women a bit. It also makes you wonder if things would have been different if the book had come out before he was assassinated. For someone so full of life, to be so brutally denied it, was very upsetting. The world would have been better with him in it.

You can also listen to a piece about Laurence Fishburne On Becoming Malcolm X
at 12:05