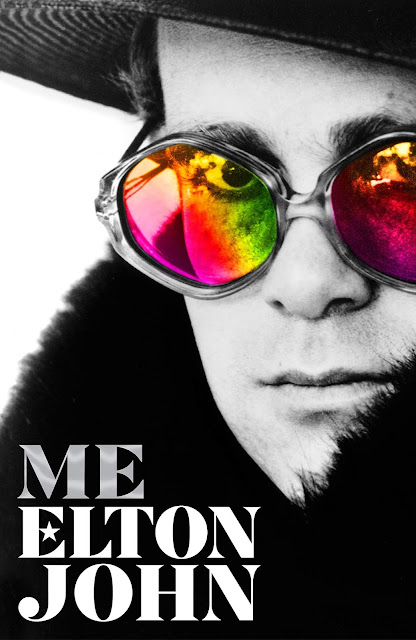 The last read of my 30s. Going out in style:

In his first and only official autobiography, music icon Elton John reveals the truth about his extraordinary life, from his rollercoaster lifestyle as shown in the film Rocketman, to becoming a living legend.

Christened Reginald Dwight, he was a shy boy with Buddy Holly glasses who grew up in the London suburb of Pinner and dreamed of becoming a pop star. By the age of twenty-three he was performing his first gig in America, facing an astonished audience in his bright yellow dungarees, a star-spangled T-shirt, and boots with wings. Elton John had arrived and the music world would never be the same again.

His life has been full of drama, from the early rejection of his work with song-writing partner Bernie Taupin to spinning out of control as a chart-topping superstar; from half-heartedly trying to drown himself in his LA swimming pool to disco-dancing with Princess Diana and Queen Elizabeth; from friendships with John Lennon, Freddie Mercury, and George Michael to setting up his AIDS Foundation to conquering Broadway with Aida, The Lion King, and Billy Elliot the Musical. All the while Elton was hiding a drug addiction that would grip him for over a decade.

In Me, Elton also writes powerfully about getting clean and changing his life, about finding love with David Furnish and becoming a father. In a voice that is warm, humble, and open, this is Elton on his music and his relationships, his passions and his mistakes. This is a story that will stay with you by a living legend.

This was just brilliant. Loved it.

I recently watched Rocketman. It was directed by Dexter Fletcher (anyone who knows my love of Press Gang will appreciate that one), and starred Taron Egerton, who I loved in Eddie the Eagle (also directed by Dexter Fletcher). I thought it was good. Taron was amazing as Elton, and it's always nice to see Richard Madden. I think it's probably one of those films that's better seen on a big screen. The flamboyance didn't really transfer to Netflix and my little laptop.

But this biography managed to be far larger than life and kind of down-to-earth all at the same time. It managed to fit in everything the film couldn't, all the people you were curious about (Lennon, Diana, David), as well as a history lesson in music. I always go and look up things I don't know about in books, and I managed to Google:  Lady Samantha, Plastic Penny, Delaney & Bonnie, Leon Russell, The Band, Honeybee, I'll Always Love My Mama, and Slattery's Mounted Fut (the Queen Mother's favourite song!). I also went to look up Polari, which fascinated me so much I'll do a separate post on that.

Taron Egerton also reads the audiobook, with Elton John reading the beginning and the end. They do it really well.

There was a lot of humour in there:

While plenty of musicians will tell you that Buddy Holly had a massive impact on their lives, I am probably the only musician who can say that he inadvertently stopped me wanking.

I couldn't imagine why Dick thought this was a good idea, unless he'd secretly taken out a life insurance policy on Bernie and was hoping to make a swift financial return by getting him killed on stage. American rock audiences in the early seventies were many things, but prepared to listen to a man read poems about his Lincolnshire boyhood for forty-five minutes wasn't one of them, however wonderful said poems were.

And plenty of poignancy:

Sometimes you have to look at the hand you've been dealt and throw in the cards.

I go from nought to nuclear in seconds, and then always calm down just as quickly. My temper was obviously inherited from my mum and dad, but I honestly think that somewhere within them, every creative artist, whether they're a painter, a theatre director, an actor or musician, has the ability to behave in a completely unreasonable way. It's like the dark side of being creative. Certainly, virtually every other artist I had become friends with seemed to have that aspect to their character, too.

Even so, I still think a world in which artists are coached not to say anything that might upset anyone and are presented as perfect figures is boring. Furthermore, it's a lie. Artists aren't perfect. No one is perfect. That's why I hate whitewashed documentaries about rock stars where everyone's telling you what a wonderful person they are. Most rock stars can be horrible sometimes.

I admired his way of thinking about trying to build bridges with people he disagrees with rather than cut them off. I'm not sure I could be quite as generous. He played for Rush Limbaugh's wedding in 2010 and received a lot of criticism. But, he went on to say, 'I can assure you, as a wedding singer, I don't come cheap,' and handed all of the money over to his charity, thus turning a right-wing wedding into a fundraiser for HIV/AIDs.

I couldn't help wondering what would happen if you put Elton John's mum and Alan Cummings's dad in a room together. I have a horrible feeling they would have got on.

It was just a really good book.

I'm off to watch Rocketman again. I think it will mean more after reading his autobiography.