Not My Father's Son 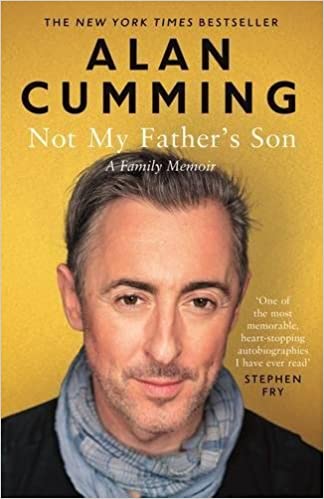 Recently finished this. A truly excellent autobiography. As it says in the reviews:

Equal parts memoir, whodunnit, and manual for living... a beautifully written, honest look at the forces of blood and bone that make us who we are, and how we make ourselves.  – Neil Gaiman

I'll admit, I was originally drawn to it because of The L Word. I don't read a lot of biographies, but I'm really glad I picked this one up.

In his unique and engaging voice, the acclaimed actor of stage and screen shares the emotional story of his complicated relationship with his father and the deeply buried family secrets that shaped his life and career.

When television producers in the UK approached him to appear on a popular celebrity genealogy show in 2010, Alan enthusiastically agreed. He hoped the show would solve a family mystery involving his maternal grandfather, a celebrated WWII hero who disappeared in the Far East. But as the truth of his family ancestors revealed itself, Alan learned far more than he bargained for about himself, his past, and his own father.

With ribald humor, wit, and incredible insight, Alan seamlessly moves back and forth in time, integrating stories from his childhood in Scotland and his experiences today as a film, television, and theater star. At times suspenseful, deeply moving, and wickedly funny, Not My Father’s Son will make readers laugh even as it breaks their hearts.

He really takes an extremely painful subject and examines it with humour, humanity and the wisdom that only comes with distance from the source material.

You see, I understood my father. I'd learned from a very young age to interpret the tone of every word he uttered, his body language, the energy he brought into a room. It has not been pleasant as an adult to realise that dealing with my father's violence was the beginning of my studies of acting.

He examines a lot of questions common to people who have had difficult relationships with a parent, such as doubt over becoming a parent themselves and perpetuating those same behaviours, about subduing joy or attachment to things that might be taken away, and a desire for space and alone-time.

I love long flights. The feeling of being completely unreachable is something I savour, and the limbo-like state of being, having departed but not arrived, somehow allows me to catch up with myself, to regroup and check in. It's a little contrary to think that I look forward to careering through the  skies in a metal-fatigued box in order to gain some feeling of inner calm, but that's the way I roll.


I've always felt that about service stations on motorways, too. You can just pull over, switch off your phone and rest from the world for a while. He also mentioned crying a lot on planes, which is a really common phenomenon. That article says there's no scientific research into this, but I thought I read an article about it some years back claiming it was partly cabin pressure. Anyway, we've all done it.

But alongside the immediacy of his childhood and his relationship with his father, runs the parallel story of his grandfather and the legacy of his life - and death.

I had lost a father but found a grandfather. One of them had never sought the truth and lived a life based on a lie. The other's truth was hidden from us because society deemed it unsuitable. Both caused strife and sadness, but now both combined to reinforce for me what I knew to be the only truth: there is never shame in being open and honest. It was shame that prevented us from knowing what a great man Tommy Darling was, and it was shame that made my father treat me and Tom and my mum the way he did. All those years ago, lying in the grass of the forest at Panmure, I rejected shame instinctively. Now, my forefathers had reinforced for me how right I had been all along.

Really makes you wish everyone in the world had access to in-depth information about their predecessors. It always amazed me in Australia that so many Australians could tell you how many generations Australian they were and how their ancestors had first come to Australia, and from where, whereas in the UK most people are hard-pressed to tell you two generations back.

It's also interesting, working with genocide survivors, the scientific evidence we see coming to light about transgenerational trauma and how exposure to stress and violence alters not just your neural pathways and emotional responses, but also your DNA, and that these changes can literally get passed down to affect the behaviour of future generations. So, our behaviour is deeply rooted in both our blood and the environment in which we grow up. The interplay of those two things is very real.

Throughout the whole story, he's got a really lovely outlook on life:

I think I learned [from my mother] that having money could never be guaranteed. It could disappear at any moment, and so I've grown up wanting to feel secure when it comes to money, but doing so by treating it as something to be enjoyed, shared, and not given power.


Also, did you know Scots were the first to catalogue the word 'fuck'?

The things you learn.