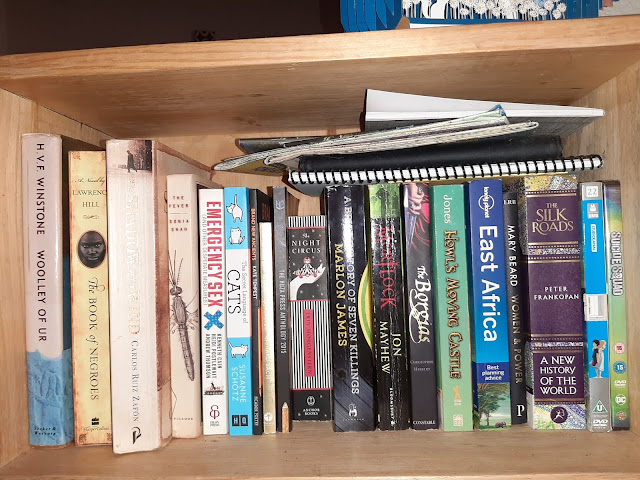 Beginning my tour of the bookshelf, here's the top shelf where I keep my favourites.

As I mentioned, books are difficult to find in Rwanda. We have a couple of bookshops, most notably Ikirezi, but selections are limited and books are often much more expensive than they would be on Amazon. When I first arrived in 2007, the VSO office used to have an entire wall of books that volunteers had left over the years. I thought it was heaven. But that was a long time ago and the office is no longer there. Wonder what happened to all those books?

So, top shelf, left to right: 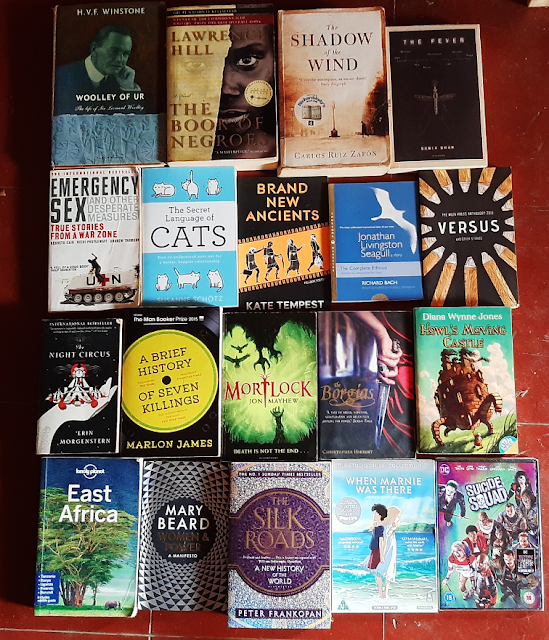 Woolley of Ur by H. V. F. Winstone: This is the biography of Sir Leonard Woolley. No relation, that I know of. However, he did die on 20th February, which happens to be my birthday. I hinted before that there might be a clue to my next novel on the shelf. It's here for research purposes. If I recall correctly, I ordered it online and my dad posted it out to me. Post can take up to three months to arrive, so research often takes a while.

The Book of Negroes by Lawrence Hill: In 2015, I went to the UK for several months to see family. I sublet my house to a girl who seemed extremely pleasant when we met. She turned out to be an utter nightmare. Kept my neighbours up all night with loud music, let the garden completely overgrow, and allowed her friends to walk off with half my books. Which is utterly rotten, given how hard they were to obtain. One of those was a lovely edition of The Pinhoe Egg by Diana Wynne Jones, which I had been so pleased to find. I was seriously peeved. Anyway, she left a couple of other books behind, none of which were remotely interesting, except for The Book of Negroes. She left two copies of this. One I gave away, the other I read. I kept it because it's a heck of a story, beautifully printed, and deckle edged. I had to, really.

The Shadow of the Wind by  Carlos Ruiz Zafón: I mentioned in my review of Labyrinth of the Spirits, that I procured this book from Acacia Book Café in Kigali. I don't think it still exists, but it was a place where you could go for a coffee and brows a number of books for sale or loan. This one wasn't for sale, but I have such a fondness for it that I eventually managed to persuade the café owner to sell it to me for about 9,000 francs (£9).

The Fever by Sonia Shah: Despite the title, not a horror story in the conventional sense. A non-fiction look at malaria and its influence on humankind throughout history. I bought it at Nakumatt in 2015, after my first bout of malaria, but didn't get around to reading it until last year, when I was felled by falciparum for an entire month, which was absolutely miserable. This was a really interesting read, and the link above also contains a TED talk she gave on the subject.

Emergency Sex by Postlewait, Cain and Thomson: This is an extremely significant book for me. I mentioned the VSO wall of books, which was a life saver when I first arrived in Rwanda as a Sign Language Researcher in 2007. Those books kept us going. This one in particular was in high demand. There was a list that you added your name to in order to receive the single copy we had, and you had to wait your turn. I think I waited about three months. It is a no-holds-barred, extremely honest look at the UN and its various failings on the global stage, told through the eyes of three civilian UN workers in the early 90s. It covers most of the big ones, including Haiti, Bosnia and Rwanda. I read the chapter on Kibuye as my bus was pulling out of Kibuye - so it had a profound effect on me. I was humbled earlier this year to meet a former peacekeeper who served under Roméo Dallaire, and to hear his experiences first hand. I always keep a copy of this book on my shelf, to remind myself never to stop questioning authority or the actions of institutions.

The Secret Language of Cats by Susanne Schötz: This was given to me as a birthday gift by my friend Chris. I have had a number of cats over the years and this should greatly aid my transition into crazy cat lady. I am ashamed to say that I have yet to read it, but will paw through it soon. There is a cat displaying its bum on the book spine. I've always found it tremendously chastening to be eye-level with a cat's arse, hence it's on the top shelf, I suppose. No sense of literary pretension whilst browsing my shelves.

Brand New Ancients by Kate Tempest: Sent to me by my lovely Aunty Heron. So named because, as a child, I couldn't pronounce 'Helen', also she spends a lot of time on her narrow boat, navigating the canals with Uncle Clive, who catalogues wildflowers. To her, I'm Magpie. She's often given me books over the years for my birthday or Christmas. Some really good ones, such as Red Rosa. This is another great one, and sparked my interest in Kate Tempest, a fantastic contemporary poet.

Jonathan Livingston Seagull by Richard Bach: Talking of narrow boats, it was on that boat, Celia, that my mum's partner introduced me to Jonathan Livingston Seagull in my teens. It's a classic. This is not the original book, which I think Merrick still has at home. I just saw this looking at me from a shelf in Ikirezi, so added it to the collection.

Versus by Huza Press: To me, this is a very special collection of short stories. It was published around 2015 by Huza Press, a publishing house in Rwanda. When you search for books written by Rwandans, almost everything you find is non-fiction and usually a memoir or a biography about the genocide. There are very few fiction writers who make it into press. Huza held a writing competition, and the short stories in this collection were either winners or runners-up from that competition. As such, they span a wide range of genres from science fiction and fantasy through to literary fiction. It's an extremely important work. Unfortunately, I think it's currently out of print, so I'm very lucky to have a copy. It is unlikely that Huza will be able to make it POD on Amazon themselves, due to the barriers Amazon put up for African publishers.

The Night Circus by Erin Morgenstern: Picked up in a charity shop in Alloa, Scotland the year before I moved back to Rwanda. Was visiting my friend Paul, of Northern Antiquarian fame, to look at standing stones. Just stumbled into this shop and the cover caught my eye. Thought it was excellent. Can't quite remember where this copy came from. Like the circus, it turned up one evening, its origin a mystery. Now, where did I put my red scarf?

A Brief History of Seven Killings by Marlon James: I'd been wanting to read this for a while. Saw a copy in Ikirezi and brought it home. It was okay.

Mortlock by Jon Mayhew: Still sore about the loss of The Pinhoe Egg, which would definitely have been on the top shelf if I still had it, I picked up a copy of this in Nakumatt. That was a huge Kenyan supermarket chain that went bust in 2018 and has since disappeared, but it use to run a big outlet in town with a modest book section. Weirdly, around that time, I was considering writing a character called Mortlock. I wasn't sure if it had been done before, and a quick internet search showed that Jon Mayhew had beaten me to it. So, when I saw the title staring back at me, I must admit, I was a bit unnerved. It answered the question at least, and I dropped the character. But the real clincher on this one was the black edging. An extremely cool design choice. Follow the review link to see.

The Borgias by Christopher Hibbert: Another Nakumatt purchase. What can I say? I'm a huge Borgias fan. I wanted to know more.

Howls' Moving Castle by Diana Wynne Jones: And another Nakumatt purchase. Goodness, not sure how they went out of business with all the books I bought. It all began with Ghibli. I adore their adaptation of the book. It led me to read the entire trilogy and name two of my cats Sophie and Howl (the third is named Sen, from Spirited Away). So, naturally, there needs to be a copy on the shelf.

Lonely Planet Guide to East Africa: Another item possibly left by the phantom Pinhoe Snatcher. I'm not that adventurous, really. I rarely leave Rwanda. Over the years I have explored Sierra Leone, DRC, Uganda and Kenya, but that's about it. This is probably long out of date and I'd recommend the Bradt Travel Guide for Rwanda. Though, with C19, it's likely to be a while before anyone's doing much exploring.

Women & Power: A Manifesto by Mary Beard: A birthday present from Aunty Heron. One which I am ashamed to say I haven't read yet, but it's on the TBR list. It does have a very beautiful, shiny cover.

The Silk Roads: A New History of the World by Peter Frankopan: An absolutely excellent history of the world from beyond the Western perspective. Very much enjoyed this one. Plus, another lovely cover. Picked up at Ikirezi. Lent to someone who never gave it back. Bought another copy.

Couple of DVDs propping up the end of the bookshelf. When Marnie was There, Ghibli, obviously. Sent to me by my dad. The other is Suicide Squad. Can't remember if I ordered it online or found it in Nakumatt. Hadn't seen it and really wanted to. Have a feeling it didn't work with my computer. Films are as hard to find as books around here. Anyway, my current laptop doesn't have a DVD player, so they're mostly decoration now.

Then we come to the obligatory 'shelf junk' wedged between the books and the top of the shelf... 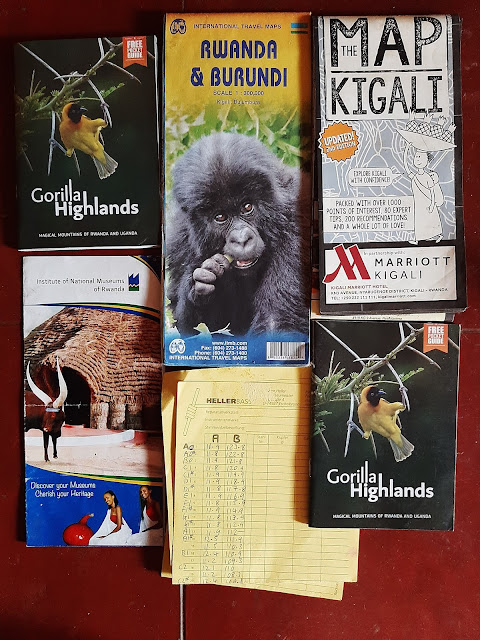 Clockwise: 1) A tour guide pamphlet of some description, mostly about bird watching in Rwanda?  2) a travel map of Rwanda & Burundi, never opened, I think pinched from an Airbnb in Musanze when my mum and Merrick visited last year, 3) The Kigali Map, put together by my extremely talented friend Kirsty Henderson, who sometimes deigns to drop by the country once in a while. Something of a local celebrity, and now building her own house in Portugal. I help her moderate the Living in Kigali Facebook group, linked to her Living in Kigali website, 4) apparently a second copy of the bird-watching guide, 5) string measurements for the piano I'm attempting to build with my friend Désiré, and 6) a tour brochure for national museums, with a picture of one of my favourite attractions on the front, Nyanza Mwami Palace (The King's Palace). Well worth a visit if you're ever in the country. 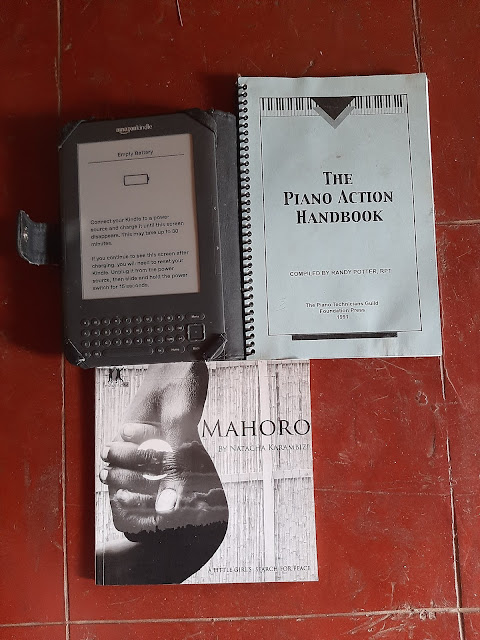 Some other stuff in that pile that is not junk: 1) an extremely old Kindle, 2) The Piano Action Handbook, again related to the Kigali Keys project, and 3) Mahoro, meaning Peace, by Natacha Karambizi, a story about the genocide written through the eyes of a child and published by Imagine We, a publishing house in Kigali largely dealing in children's books. More about them on the bottom shelf.

So, that's everything crammed onto the top shelf of my little bookshelf in Kigali. To look at the other shelves, click here.
at 11:09