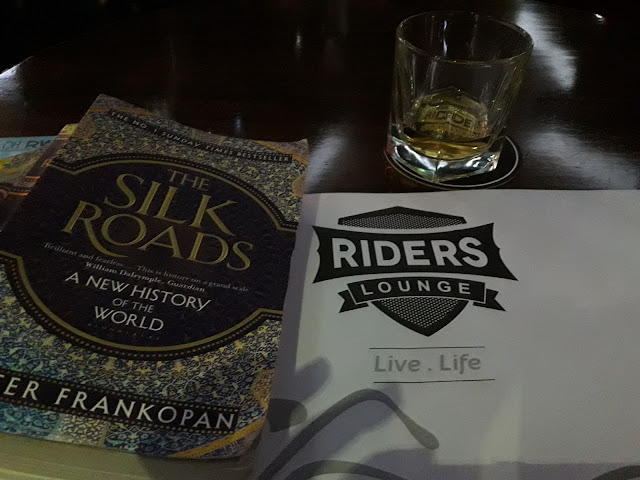 Finished reading The Silk Roads by Peter Frankopan in a bar in Kigali the other day, while waiting for the rain to stop. It's an absolutely excellent book looking at the history of the world from an eastern perspective. Right from the dawn of civilisation to the events that led to 9/11 and the world as we know it today. Extremely readable.

One of my favourite nuggets came around the 700s, when Rome worshipped the vine and beer fuelled armies:

India eschewed alcohol too. They did not do so for religious reasons, but because of their entirely reasonable view that if drunk, 'how can someone run a kingdom properly?'

There were so many interesting titbits of information, such as the Chinese being looked down on as unhygienic because they didn't wash after using the toilet, but wiped their bums with paper. Relatable as the bidet (or 'bum gun') didn't take off in England, either. Also, the blue and white pattern synonymous with Chinese pottery actually originated from Persia. Also in the 700s, 'the best quinces were from Jerusalem, and the finest pastries from Egypt; Syrian figs were bursting with taste, while the umari plums of Shiraz were to die for.' And this, which is fascinating as an example of just how much traditions change, and how tradition should never be viewed as absolute:

As the number of followers [of Islam] grew, so did their aspirations and ambitions. Crucial in this was the designation of a clear religious centre. The faithful had previously been told to face Jerusalem when they prayed. In 628, however, following further revelations, it was apparently announced that this instruction had been a test and should now be amended: the direction to face when praying was nowhere else but Mecca.

Not only that, but the Ka'ba, the old focal point of the polytheistic, pagan religion in Arabia, was identified as the cornerstone for prayer and pilgrimage within the city.

The influence of language also drew me in. The Viking Rus' gave their name to Russia. Apparently they were 'tall like palm trees, but always armed and dangerous, each carrying an axe, a sword and a knife.' Other linguistic quirks:


The Rus' were ruthless when it came to enslaving local populations... So many were captured that the very name of those taken captive - Slavs - became used for all those who had their freedom taken away: slaves.


... So widespread was slavery in the Mediterranean and the Arabic world that even today regular greetings reference human trafficking. All over Italy, when they meet, people say to each other, 'schiavo', from a Venetian dialect. 'Ciao', as it is more commonly spelt, does not mean 'hello'; it means 'I am your slave'.

And I like this snippet of text from a report by a man who had pleased the Ottoman Sultan in 1599 and was offered 'tow wyfes, either tow of his Concubines or els tow virgins of the beste I could Chuse.' Even the sanctity of spelling and grammar isn't immutable (see also Shakespeare).

There's been quite a bit of bloodshed down the line, along with pestilence. Apparently, Europe lost a third of its population to plague (around 25 million people), which was a tragedy, but, as the book explains, also led to a massive improvement in pay and the quality of life for those remaining, creating huge social mobility opportunities as there were nowhere near enough servants to go round anymore, so jobs were plentiful and pay fairer.

There was also an interesting description of what I assume was the Peacock Throne of the Iranian Shah: 'The throne is entirely encrusted with diamonds, sapphires and emeralds, and there are jewelled birds (not peacocks) standing on the sides,' which begins Those Rosy Hours at Mazandaran. An important description, as the throne was subsequently lost.

I must admit, I prefer ancient history to modern. When you can travel the globe in hours rather than weeks, and drop a single bomb to wipe out thousands, it rather takes the wonder out of things. But I certainly feel better educated. I knew that Britain, the US and Russia played political brinkmanship throughout the East, but I really didn't understand the extent of it. Seriously eye-opening stuff and provides a much better grounding to explain current political pratwittery.


Trailers that Colin Powell described as mobile biological weapons facilities 'hidden in large groves of palm trees and... moved every one to four weeks to avoid detection' turned out to be weather balloons - just as the Iraqis had said they were.

I'll finish up with a very poignant paragraph, one that really chimed reading here in Central East Africa:

As in Iraq in the 1990s, it is clear that the effect [of sanctions] is strongest and most pronounced on the poor, the weak and the disenfranchised  - making their bad lot even worse. Restricting Iranian oil exports of course has an impact on the standards of living not only of Iranian citizens but also of people living on the other side of the world. In a global energy market, the price per unit of gas, electricity and fuel affects farmers in Minnesota, taxi drivers in Madrid, girls studying in sub-Saharan Africa and coffee growers in Vietnam. We are all directly affected by the power politics going on thousands of miles away. It is easy to forget that, in the developing world, cents can make the difference between life and death; the enforcement of embargoes can mean silent suffocation for those whose voices cannot be heard - mothers in the slums of Mumbai, basket weavers in the suburbs of Mombasa or women trying to oppose illegal mining activities in South America. And all so that Iran is forced to disavow a nuclear programme built on US technology sold to a despotic, intolerant and corrupt regime in the 1970s.