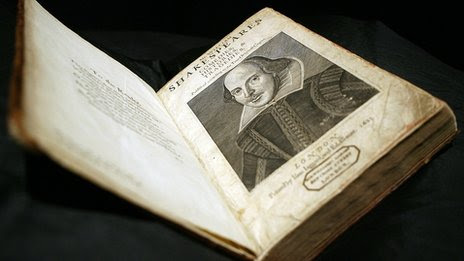 Today marks the 449th birthday of William Shakespeare... whoever he was.

Always ongoing controversy about that. The BBC lead with this story today: Shakespeare scholars try to see off the Bard's doubters

To be honest, a rose by any other name would smell as sweet.

I think my favourite book on the subject has to be Bill Bryson's Shakespeare: The World as a Stage. 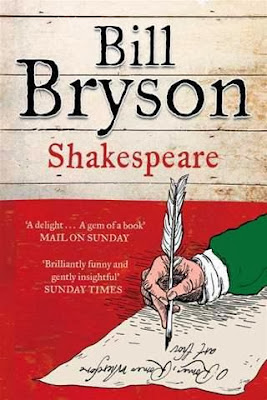 Far more interesting than the repetitive argument over whether Shakespeare was Shakespeare or not, is what she, he, or it, added to the English language, and how that language has changed, and formalised, over time. I wonder whether the Great Bard would have managed to knock out half as many incredible works had he been forced to conform to today's stringent grammatical and stylistic rules?

Amongst the words first found in Shakespeare are abstemious, antipathy, critical, frugal, dwindle, extract, horrid, vast, hereditary, excellent, eventful, barefaced, assassination, lonely, leapfrog, indistinguishable, well-read, zany and countless others (including countless). Where would we be without them? He was particularly prolific...when it came to attaching un-prefixes to existing words to make new words that no one had thought of before - unmask, unhand, unlock, untie, unveil and no fewer that 309 other in a similar vein.

And, as mentioned in a previous post on grammar:

Spelling was luxuriantly variable...You could write 'St Paul's' or 'St Powles', and no one seemed to notice or care....People could be extrordinarily casual even with their own names...Philip Henslowe, the empresario, indifferently wrote 'Henslowe' or 'Hensley' when signing his own name, and others made it Hinshley, Hinchlow, Hensclow, Hynchlowes, Inclow, Hinchloe and half a dozen more. More than eighty spellings of Shakespeare's name have been recorded...the Oxford English Dictionary...prefers Shakspere. Perhaps nothing speaks more eloquently of the variability of spelling in the age than the fact that a dictionary published in 1604, A Table Alphabeticall of Hard Words, spelled 'words' two ways on the title page.


Wouldn't it be nice if we could all live like that for a year, just to see whether the world would end?

[UPDATE: Here's an interesting article which disputes the claim Shakespeare invented so many new words.]
at 16:14