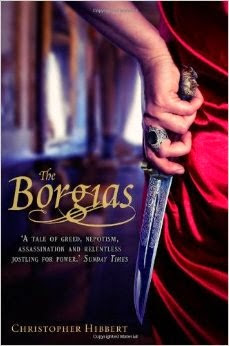 I was highly entertained when I walked into Nakumatt in Kigali and saw Christopher Hibbert's biography of The Borgias on the shelf. I just couldn't resist. (Also exceedingly sad to learn that he died, apparently just before this was published?)

The name Borgia is synonymous with the corruption, nepotism and greed that were rife in Renaissance Italy. Notorious for seizing power, wealth, land and titles through bribery, marriage and murder, the dynasty's dramatic rise from its Spanish roots to its occupation of the highest position in Renaissance society is a gripping tale.

The powerful, voracious Rodrigo Borgia, better known as Pope Alexander VI, was the central figure of the dynasty. Two of his seven papal offspring also rose to power and fame: Cesare, who served as the model for Niccolò Machiavelli's The Price, and his daughter Lucrezia Borgia who, alongside Cesare, famously murdered her husband.

Really enjoyed this wild romp through the Romagna. Very easy reading, nice choice of font, cute gold-detailed cover. Read more like fiction than history. Though I see why the television series stopped where it did. The decline was swift and unpleasant. The description of Pope Alexander's funeral was hideous. Apparently he turned black in the heat and no one would touch his body, so they tied a noose around his ankle, dragged him to the cemetery, rolled him up in a carpet and sat on him to get him into the under-sized coffin that had been provided!

And that Cardinal Giuliano della Rovere went on to succeed him! Oh, my.

Yes, they were mad (mostly through syphilis), bad and dangerous to know, but my goodness, they were entertaining. How young people died back then, and how much living they did in such a short space of time.

For me, Holliday Grainger will always be the definitive Lucrezia Borgia. When you hear that name, you think of the cunning poisoner, yet by all accounts she was illustriously (a word much used in them days) lovely, sweet and charming, with a strong bent towards charitable works in later life. As an actress, she delivers that blend very well.

Gruesome as they were, you sort of feel an attachment by the end of the series, even if they gloss over Cesare's debilitating venereal disease and give him far more rationale and conscience than he actually seemed to possess. I really wouldn't have wanted to see the decline portrayed on film, and I was a little saddened to read about it.

But Hibbert really did write it well. A mixture of Game of Thrones (all that cloth-of-gold) and studious historian. Painted an acute family portrait in vivid colours. An easy, enriching read.
at 19:45