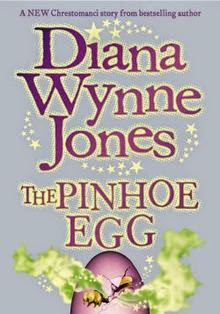 I'm a huge Howl's Moving Castle fan. I think if I could be any character in any story, I'd be Sophie. We were talking Diana Wynne Jones a while back when my friend Harri told me that I'd also like The Pinhoe Egg.

Then, a few weeks back, nearing what would have been DWJ's 80th birthday, I walked into Nakumatt and there, on the shelf, was the book!

How could I not buy it?

Anyway, due to crazy amounts of day job and other fantastic reads (including The Swan Thieves and The Shadow of the Wind) it sat on my shelf for a while. Also, because it's a hardback, which is my most favourite type of book to look at, but my least favourite for reading. I'm very much a Kindle convert. I like to carry a library in my bag without fear of damaging it. Also, I find reading in bed with a hardback cumbersome. If you don't hold it right you get hand cramp or hit yourself on the nose with the cover.

For the past week though, I've taken it everywhere with me. It's surprisingly light for a hardback, and I only hit myself on the nose once.

This egg was not meant to be found. Chrestomanci himself, Cat's guardian and the strongest enchanter in the world, is sure to find it particularly interesting. And that's the last thing Marianne's family of secret rogue witches wants.

But the Pinhoes' secrets are falling to pieces, and powerful spells are wreaking havoc across the country-side. Marianne and Cat may be the only two who can set things right—if Marianne accepts her own powerful magic, and Cat solves the mystery behind the mystical Pinhoe Egg.

I'd never read any of the Christomanci series before, but now I know that I must. DWJ never held back on telling a truly earth-based pagan tale, which is why I think so many love her.

"A new religion came to this country," Millie said, "full of zeal and righteousness - the kind of religion where, if other people didn't believe in it, the righteous ones killed and tortured them until they did. This religion hated witches and hated the hidden folk even more. They saw all invisible folk as demons, monsters and devils, and their priests devised ways of killing them and destroying their magic that really worked."

My friend Paul, who runs The Northern Antiquarian, has often theorised that what we call today 'modern paganism' and Wicca are the broken remnants of what was once a pre-Christian shamanic tradition. Basically, the conclusion of The Pinhoe Egg says something very similar, that there came a period of bloody violence in history, after which those who were left could only pick up the pieced of what they remembered and try to sew it back together as tradition.

Very interesting stuff, and, although my heart always belongs to Howl, Christomanci's quite dashing too. Though I think all those dressing gowns might get a bit overwhelming!
at 10:41