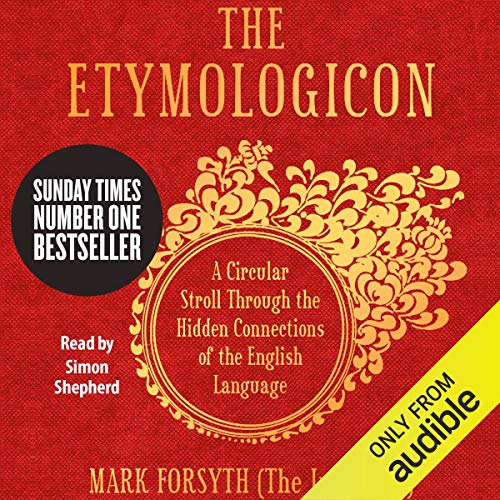 Oh, this is a book reviewer's nightmare.

A quirky, entertaining and thought-provoking tour of the unexpected connections between words, read by Simon Shepherd. What is the actual connection between disgruntled and gruntled? What links church organs to organised crime, California to the Caliphate, or brackets to codpieces?

The Etymologicon springs from Mark Forsyth's Inky Fool blog on the strange connections between words. It's an occasionally ribald, frequently witty and unerringly erudite guided tour of the secret labyrinth that lurks beneath the English language, taking in monks and monkeys, film buffs and buffaloes, and explaining precisely what the Rolling Stones have to do with gardening.

The reason it's so bad is that I stopped to take notes every second sentence. It's absolutely packed with etymological gems. The problem is, it's so packed, I think I've probably only retained a dozen.

Some of my favourites include California deriving from Caliphate, and therefore being the only one still in existence. Book comes from birch parchment in the German language, which was used to write on before paper. Tragedies are 'songs of the goat,' because ancient Athenian actors wore goatskins while singing them. Starbucks was almost called Pequot from Moby Dick, until someone pointed out that, if you're going to start selling coffee, you probably don't want P in it. Pendle Hill literally means Hill Hill Hill. Britons are 'tattooed people.' The English thought the Welsh so crazy about cheese, that they believed the Welsh placed a piece of cheese on a woman's vagina during labour to encourage the child to come out. That last one isn't an etymological point, just an interesting one. Meanwhile:

Do you enjoy the taste of avocado? So did I, until the terrible day when I realised that I was eating Aztec balls. You see, the Aztecs noticed the avocado´s shape and decided it resembled nothing so much as a big, green bollock. So they called it an ahuakatl, their word for testicle. When the Spanish arrived they misheard this slightly and called it aguacate, and the English changed it slightly to avocado. To remember that I used to like avocados with a touch of walnut oil only adds to my shame.

I knew about the words Shakespeare gave to the English language, but I didn't realise how many Shelley gave, such as spectral, optimistic, bloodstain, expatriate and heartless. And 159 words are attributed to Thomas De Quincey, including subconscious, incubator, entourage and interconnection. Milton had loads, too: stunning, terrific, awestruck, depravity, extravagant and debauchery.