Akkad at 65k - Bring on the Battle

Oooh, this took a while to get to.

So much free time with COVID, and I seem to waste most of it or spend it fussing over pernickety things that don't matter much.

Part of it has been a lack of confidence.

I reached this part where the lead character had been building up to take revenge on someone who destroyed his life. Only, that someone was king of a city state. Military strategy has never been my strongest point, and how to bring down the city kind of stumped me. There are no historical records to help.

Sometimes, when I'm stuck for a way forward, I'll just walk around the room, recording anything that comes out of my head, and usually I end up talking my way out of a corner. But this was just a bit too technical. My brain froze whenever I thought about it, so I  stopped writing completely.

I mean, the period was complex. There were a whole load of city states, all run by different lugal and ensi, and all at war over trade routes and resources. Makes for fascinating history, but trying to pick that apart takes time.

And, because it's a revenge scene, it needs to be good. It has to be thought through. You can't just leap in there all d'Artagnan and swish your sword about. Revenge is a dish best served calculated, and I've always been mathematically challenged.

So, I got nowhere fast. I'd been spewing out words whilst writing a love story, and I'm usually well up for a bit of confrontation, but an entire war... I don't think I've ever written that before. Nope, fairly certain I haven't. The closest I've probably come was the Anglo-Ashanti war in Secure the Shadow, but that was easy to write because it was entirely taken from records of the time. I just added a bit of detail. I've alluded to wars in The Children of Lir and Rosy Hours, but always as a side story, never the main meal. So, overcooking that food analogy, I felt like I'd bitten off more than I could chew.

Because of my inability to figure it out, the manuscript hovered around 58k for an eternity. I was so disheartened, because it had been going so well until that point. But the problem was, I was trying to plot it. I'd sit there with a pen and paper and try to draw up a battle plan.

Completely forgot - I'm a total pantser. I never really plan things out. What I needed to do was start writing and trust that it would resolve itself. I just had to get over that horrible habit of avoidance.

So, yesterday I managed an acceptable 3,730 words. I've just now finished up that chapter that was causing me so much angst. I think it's worked out okay. Now I can get on with the rest of it. Hoping to hit around 65k this afternoon.

Feeling much better about things. The rest of the story is fairly clear from hereon in. Now that it's unavoidably going to be two novels, I'm no longer worried about the word count. Although, I'm slightly worried about this first book as it was never meant to be the main event. I think it's going well, but you never know until the end.

Anyway, to give you a taste of what I've been dealing with, here's a couple of rough-not-ready excerpts.

The rise of Akkad, the political edition:

“Oh, Apsu,” she said, placing her hand against his cheek. “A storm is rising in the south. A storm as we have never seen before. There is an ensi there called Zage-Si. He was the lord of Umma for seven years, and then turned his attention to Lagash–”

“That is nothing to be afraid of,” Apsu interrupted, placing his own hand over hers and squeezing to reassure her. “Umma and Lagash have been fighting over borders since before we were born. One has land, the other wealth. They will settle again soon enough.”

“No, they will not. Ensi Zage-Si has taken Lagash.”

Apsu stared into Musarru’s eyes as the enormity of this news sank in. Umma was a large city on the plains to the south, and Lagash was an agricultural settlement by the banks of the Tigris. It was an important trading post, a gateway to Susa, and from there, safe passage through the Zagros Mountains to a hundred destinations beyond. All his life, Umma had been attempting to encroach on Lagash territory, to take over the fertile plain of Gu-Edin so that they could provide more food for their people. Each time, Lagash pushed them back and the borders ended up almost exactly where they had always been. In retribution, and to pay for the skirmish, Lagash increased the price of their goods to Umma and taxed them double to access the Zagros trade route. Umma would eventually refuse to pay and attempt to take more land again. It was a continuous cycle that most people living outside of those cities simply rolled their eyes at and paid little attention to. The thought that Umma had overpowered the superior might of Lagash, and laid claim to it, was disturbing.

“The rulers of Lagash should take their complaint to the temple at Nippur. If the gods of these cities are warring, their father, Enlil, will resolve it. It is one thing for Ningirsu and Shara to squabble as siblings, but one cannot murder the other.”

“It is worse than that,” Masarru continued. “Now they are calling him lugal. When he was finished with Lagash, he took Uruk and Ur, also. He commands the entirety of the south, from the Euphrates to the Tigris, and now they say he is looking north.”

“He has installed ensi in each of the cities he has taken. He has already written to Puzer-Sheun, asking him to rule Kish in his name. Puzer-Sheun refused, but everyone knows he is in poor health. Ur-Zababa has replied without his father’s consent, saying that if Lugal Zage-Si will sheath his blade until his father’s peaceful passing, he will kiss Zage-Si’s feet and swear fealty to him.”

“Ur-Zababa will give up his right to rule as King of Kish, and instead become a puppet for this southern sarraqum? I doubt it.”

“He has no choice. This Lugal Zige-Si is like the Great Flood rolling in. He drowns everything in his path. There is no way to turn him back or to calm his tempest. If my husband does not agree to rule on Zige-Si’s terms, he will not rule at all. Ur-Zababa is arrogant, he’s cruel, but he’s not stupid.”

Two mighty kingdoms, Ebla and Mari, raged against one another. It was said to be a battle to the death. Ebla had once been a great seat of learning, training scribes from every corner of the known world. Even Nur-ili, the soothsayer from the temple at Kish, had trained at Ebla.

The city rested on the shores of the Western Sea. Ships sailed from her harbour as large as whales. They left port for months on end and returned with fragrant oils, spices, fabrics and wine. Villages along the coast harvested pearls as fat as figs, and left them before altars to a host of strange gods, unheard of in other lands.

The problem was that Mari controlled the waterways. Having been chased out of Sumer by Queen Kubaba, the Mariotes had struck north and secured the Euphrates all the way from the tar pits of Hit to the throne of fish-tailed Dagon at Tuttul. They controlled the trade route with a cut-throat army, hardened by centuries of war with Sumer and its surrounding cities. Without the cooperation of Mari, Ebla could not get her lucrative wears to market, and Mari would rather steal than barter. Many other kingdoms had been drawn into the argument over the years, including Nagar and Elam, providing soldiers and weapons in much the same way a fat man feeds kindling to the fire so that he can continue to eat. 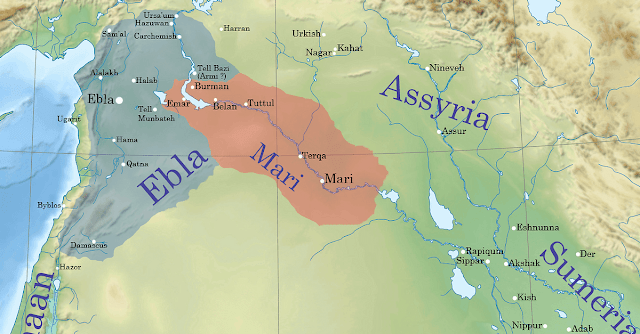