I have managed to do so little writing lately. Each time I sat down to start, another assignment landed on my desk, but somehow I've managed to push the manuscript over 40k.

I've just reached the part where my main character enters the ancient Sumerian city of Uruk, on the banks of the Euphrates. Whenever I start to write about a new place, I pause to do a bit of reading. It was late last night when I kicked back with a glass of wine and set Wiki on text-to-speech. I closed my eyes whilst I listened, trying to imagine what the place must have looked like.

Partway through, it started talking about 'cone temples' and 'cone mosaics.' I had no idea what these were, so pulled up Google Image to take a look.

My jaw hit the floor. 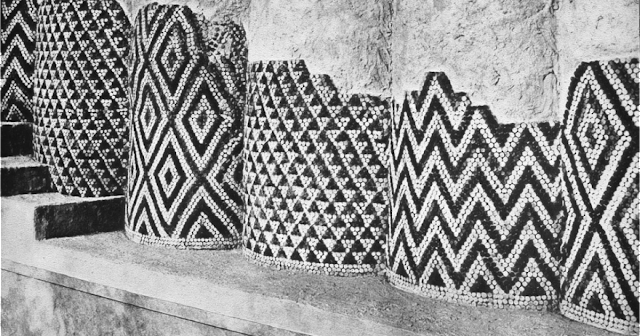 Here in Rwanda, we have a traditional form of art called imigongo. It's made from cow dung, and when I overlay the pictures of imigongo with the patterns at Uruk, you'll see why I was so stunned. 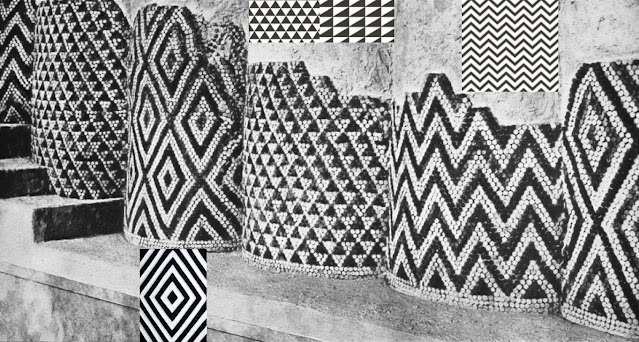 The similarity is just startling.

Wiki says imigongo was traditionally used to decorate 'magical huts,' so places of healing and shamanism, perhaps. Nowadays, you see it everywhere: the national stadium, Kigali Cultural Village, hotels in town, craft markets - it's all over the place. 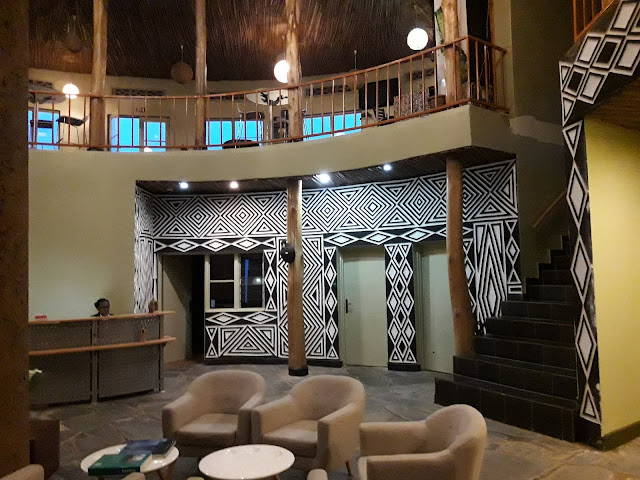 Nowadays, imigongo is almost exclusively black and white, but the article said that traditionally it was red, white and black. Here's a colour photo from Uruk. 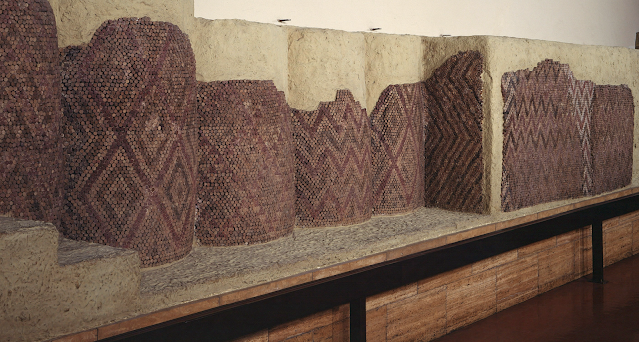 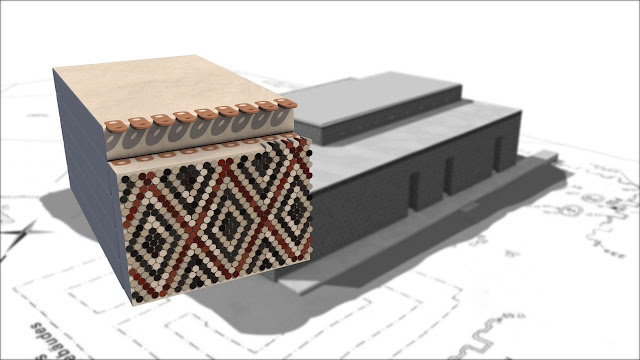 From video on the construction of Uruk 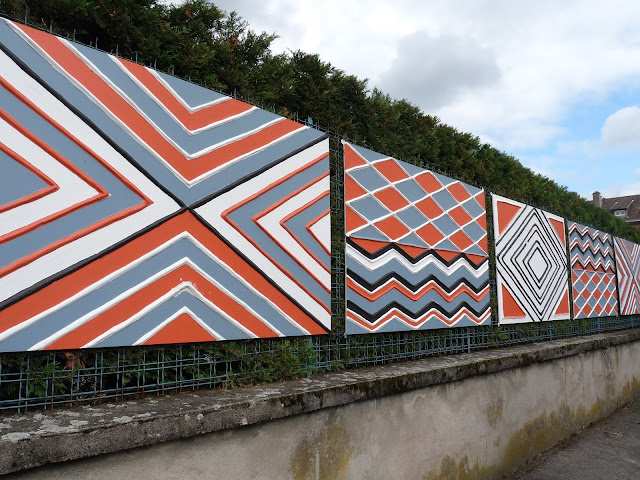 One of the most popular imigongo patterns is this one, on my wall. 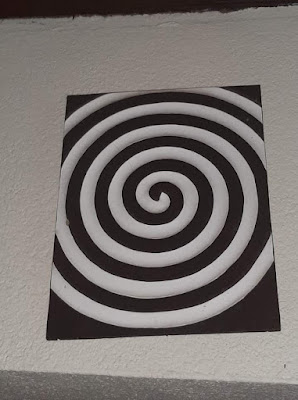 The swirly spiral is said to represent the elephant's trunk. Though, it's always strongly reminded me of the Australian Aboriginal symbol for a watering hole.

There's something quite intuitive about swirls and curves representing water. Though, intuition is obviously culturally subjective. However, the cone temple at Uruk, where the mosaics are, might possibly have been 'the earliest water cult in Mesopotamia.' Although, I've yet to see a picture of a swirly pattern there. They seem to have gone for straight-line geometric shapes. So, that link doesn't really mean anything. It's just me thinking out loud.

Obviously, geometric patterns are nothing unusual in cultures all over the world, from the Azteks to the Celts. The Normans also had a strong affinity with the zig-zag pattern, as you can see from this church in the English village of Quenington. 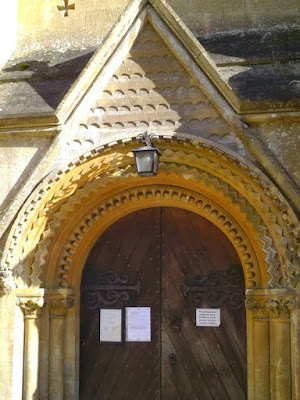 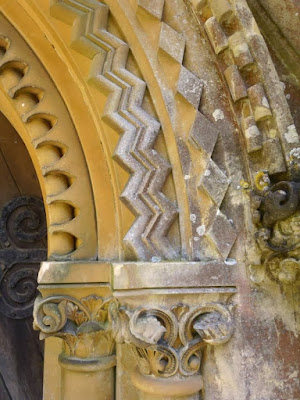 Everyone was clearly into psychedelics back then.

So, yes, geometric shapes are absolutely nothing new. But the similarities between the cone temple at Uruk and imigongo just seem so intriguing, it's hard not to wonder whether there's a link.

I started to think about it hard, and I've come up with a couple of theories. Some, or all of it, might be complete codswallop, but have a read and see what you think.

The first theory was naturally migration of some sort. It's a difficult topic to discuss in Rwanda because of the history of ethnic division. Nowadays, everyone is Rwandan, but during the Genocide Against the Tutsi in 1994, there were strong divisions between Hutu and Tutsi. Many Tutsi bodies were thrown into the Nyabarongo River in the mistaken belief they would 'go back to Ethiopia.' Therefore, you don't really talk about migration because it stirs up very unpleasant memories.

Yet, the population of Africa has been surprisingly fluid in many areas as recently as 200 years ago, as I discovered when I became interested in Congolese masks. DNA and cultural studies do seem to suggest that there might have been a southerly migration of people from the Gibe region of Ethiopia. However, this happened so long ago - suggestions fall around the 15th century (over 600 years ago) - that Rwandans as a population share far more of their DNA with each other than anyone still does with Gibe. It's sort of like British people and their genetic links to central Europe and Scandinavia.

Anyway, if, for the sake of a theory, we did accept that there might have been migration from Ethiopia, that gets us very close to Egypt. Now, there's some evidence that, before the Egyptians started building their own brand of pyramid, they tried out a few Sumerian step pyramids first. That puts the Sumerians in Africa.

The artwork could have potentially migrated up from Uruk, over the lip of the Red Sea into Egypt, then from there down through Ethiopia to Rwanda. 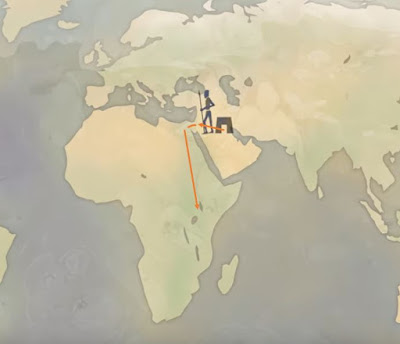 Map from this video on the rise of Sumer

It's a nice idea that art was carried by people from Sumer to central Africa, where it has remained, but it's highly unlikely. The reason I say that is that you would sort of expect to find imigongo in some of the other countries it passed through, like Ethiopia, Eritrea and Sudan, but it doesn't seem to be there.

There's something similar in West Africa. This is a picture of the Bwa people from Burkina Faso. 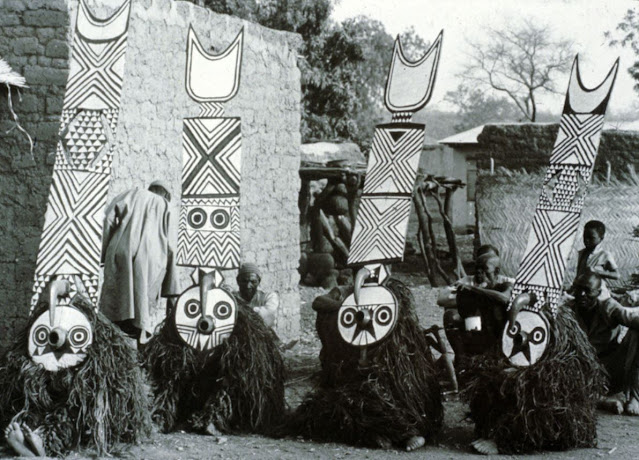 Picture from this article

The X shape is the same, but they use a lot of other patterns, such as the straight, rather than diagonal, chequered pattern, that you don't tend to see in imigongo. It's not quite such an exact match with Uruk. Though the crescent moon shape is interesting, as one of the main temples at Uruk was dedicated to Inanna/Ishtar, who is very much associated with the moon. But, then, the moon is a completely universal symbol as everyone in the world can look up at it. It's often associated with cow horns, especially on the equator, because here, the moon waxes down to up, rather than left to right. It really does look like cow horns. 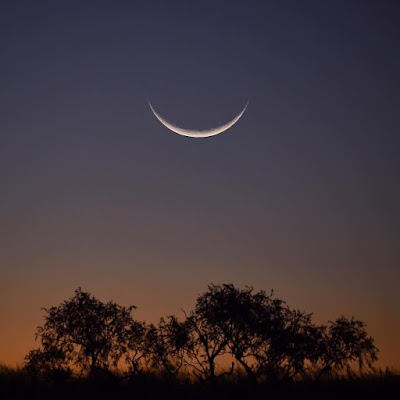 Anyway. There just doesn't seem to be a trail of that particular art going up the side of Africa in that direction.

Of course, if a route existed, art could have gone in either direction. There's no reason it couldn't have been transported using basic materials of clay and dung to Sumeria, where it was then transformed into mosaic work. It wouldn't be the first time Rwanda exported something magical. There is a regional goddess here called Nyabinghi, who sits on top of Mount Karisimbi, sipping tea from giant snail shells. She took a little trip to the Caribbean a while back and wound up in Jamaica as a central figure in Rastafari. Things work in mysterious ways.

But, still, if evidence did exist for such a migration of art, it doesn't seem to anymore.

So, I like the idea, but I doubt it's correct.

There is a more direct migration route later on between Sumer and Africa that can be traced through language. Around 2000 BC, Sumer was taken over by the Akkadians, becoming the Akkadian Empire. They spoke a Semitic language.

There was quite a bit of trade going on at the bottom of the Red Sea even before then. Between what is today Yemen and Djibouti. The Semitic language crossed over into Africa, becoming Ethiopic and part of the Ethio-Semitic language group, of which modern Amharic is one. These flowed into Ethiopia, Eritrea and Sudan. You can watch the expansion of languages here. That would have made the trade rout look something like this - a lot less effort. 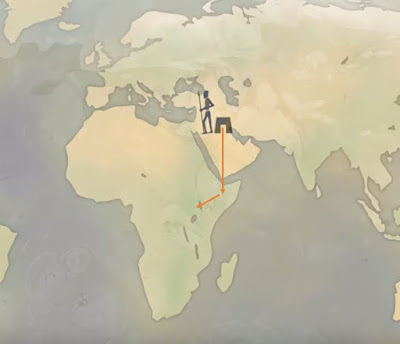 Again, there isn't much evidence of the imigongo style in countries between Sumer and Rwanda, but it's a shorter distance, so statistically less chance it would have survived over such a long period of time.

It's tenuous, but definitely more probable than the first migration theory.

After considering the idea that art and culture might have gone on tour, I tried to think whether there could be any other explanation for the similarity.

Unfortunately, I came up with one that was rather less attractive but also plausible.

Rwanda was colonised by Germany between 1884 until 1916, when Belgium invaded during the First World War.

The cone temple at Uruk was discovered and excavated by Germans between 1912-1913. The cone temple of the water cult was built on top of by the Sumerians, but they kept an eternal flame burning for the previous temple. Probably so as not to offend the previous gods who lived there. This eternal flame burns in a building named The Riemchen Building.

Given Uruk's close proximity to German East Africa, the easy shipping route, and archaeologists' natural propensity to explore, it's not inconceivable that someone came from Uruk with pictures and drawings of the mosaics, and somehow that blended into existing Rwandan crafts.

It would perhaps be the most direct way of explaining how the two places ended up with such similar patterns and colouring.

However, there's a fairly strong counter argument to this theory...

The official story of how imigongo came into being is fairly universally agreed, though not exactly when.

Kimenyi, the King of Gisaka, had a son called Kakira. Prince Kakira lived in Kibungo Province. It is said that he was the first to mix ash and clay for colour and to paint the inside of his house with imigongo patterns.

The problem is that some sources say this happened in the 18th century and others say the 19th century. It might be a translation issue whereby 1800s got confused with 18th century (1700s), making 19th century correct. There appear to have been several King Kimenyis of Gisaka, with stories dating back to the 1500s. I'd need to find someone with far better historical knowledge to place him in history.

Anyway, Uruk was completely abandoned by 700 AD. I'm not sure of the exact dates they excavated the cone temple, but if it was any time after 1912, it was far later than the first time Prince Kakira picked up a brush and started creating imigongo. Therefore, he couldn't have been influenced by the temple of Uruk, because it hadn't been discovered.

There is the very real possibility that both Sumer and Rwanda spontaneously developed the same style of art, using the same patterns and colour system, several thousand years and several thousand miles apart. After all, many things have been discovered by more than one person independently, including the Big Bang theory, the Möbius strip, and the telephone, which was discovered independently by both Elisha Gray and Alexander Bell, who filed patents on the exact same day.

So, those seem the most likely options. What do you think?

It would be interesting to know if the same patterns and colour schemes do exist in other parts of the world.