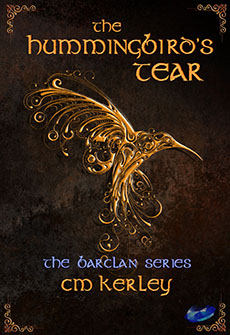 Every now and then a book cover goes past on Twitter and I can't help myself.

I really fell for this one.

Most of the books I pick from Twitter belong to new authors who are advertising a release promotion of some sort, or they're self-published authors trying to get the word out. They're not books I go out looking for and they haven't been recommended to me by friends. They're simply pot luck.

Sadly, in the past, great covers have proven to be a poor indicator of content. I don't tend to review them because I never manage to finish them.

This is a little different.

The Hummingbird's Tear by CM Kerley is published by Calumet Editions. Incidentally, the same publishers to bring you How to Be a Christian Psychic and Our Jewish Robot Future.

“There once was a time when the world did not exist.“ Here comes CM Kerley with the first breathtaking volume of the Barclan series. This amazing new author transports us to a unique, mythic time, and entwines us in magic and prophecy wherein sorcerers and kings, princes and trolls, move toward a disastrous war between ambiguous good and seriously nasty evil…but sometimes the lines aren’t so clear, and the fate of the kingdom depends on the wisdom and powers of two boys, who have a date with destiny. Kerley demolishes the old clichés about intrigue and treachery so that you become lost within the first page, and when you stop reading, you're surprised to be back in your own humdrum world.

The opening of this book blew my socks off. It was an extremely poetic, beautifully described creation myth which saw the gods birth, and then abandon, the world. A very impressive piece of writing.

Equally, the first couple of chapters were very inviting. The story of a village burning, two brothers setting out into the unknown, and a young boy hell-bent on obtaining magical power at any cost. Captivating stuff.

The rest of the book calms down substantially, evening out into a fairly solidly told piece of high fantasy. The brothers become part of a quest to gather up elemental gems scattered by the gods when they left. There is some nice descriptive:

The moon garden was named such because every flower that grew there had white petals that only bloomed at night and reflected the light of the moon. Butterflies and moths with transparent wings fluttered through the air, resting on one flower, then another, intent on visiting every bloom. A few dragonflies zinged through the air, and from far away a lonely cricket sang a forlorn night song.

It would have been nice to see the lyrical excellence of the opening chapter continue throughout the rest of the book. But if you enjoy fantasy set in a recognisable world of traders, seafarers and royal court intrigue, this may be a series to watch.
at 11:20