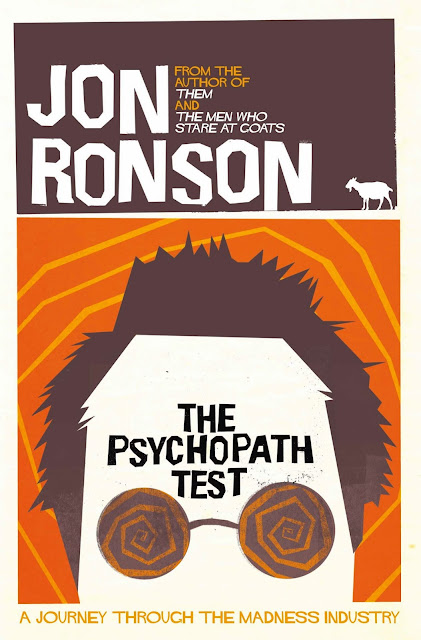 What if society wasn’t fundamentally rational, but was motivated by insanity? This thought sets Jon Ronson on an utterly compelling adventure into the world of madness. Along the way, Jon meets psychopaths, those whose lives have been touched by madness and those whose job it is to diagnose it, including the influential psychologist who developed the Psychopath Test, from whom Jon learns the art of psychopath-spotting. A skill which seemingly reveals that madness could indeed be at the heart of everything . . . Combining Jon’s trademark humour, charm and investigative incision, The Psychopath Test is both entertaining and honest, unearthing dangerous truths and asking serious questions about how we define normality in a world where we are increasingly judged by our maddest edges.

Convincing stuff. I remember having a discussion on this topic with a friend once. She is from Sierra Leone, and we were both living in Rwanda at the time. She was telling me about the suspected links between psychopathy and African leadership: how Africa had come to gain a reputation as a violent and unstable continent, plagued by war and run by warlords.

It was largely down to the concept that when so many people have nothing, the only thing you can take away or threaten them with are their families, so in order to protect the people you love, you're going to get behind the strongest leader - the one most likely to keep you safe. In a war zone, that's the person most likely to shoot first and ask questions later. The psychopaths.

I met a couple of trauma therapists in Rwanda, round about genocide memorial week, and there was a general suspicion that around 80% of the population were living with Post Traumatic Stress. This tended to be evident during memorial week, which I've written about before, but then everyone gets up and goes back to work, leaving you wondering where that goes for the other 51 weeks in the year?

Just in general terms, as someone who struggled with mental health in younger years and came through the other side, I rather empathise with madness over sanity given the situation we're all in. There's something called the Terror Management Theory, which:

...proposes a basic psychological conflict that results from having a desire to live but realizing that death is inevitable.

It goes on to propose that culture is our solution to managing terror at our own mortality. I'd go a step further and suggest that everything is. Our personalities are formed around our coping mechanisms for our own demise. We're obsessed in our cultures with the preservation of life: health shows, diet fads, religion. Well, religion is a mixture, I would hazard, of both our terror at mortality and our terror at one another: our need to control and devise hierarchies of control to prolong our lives until the promised afterlife.

If you put anything in a confined space with a constant threat of death, you would expect it to go somewhat mad. The jangly-key distraction techniques of religion, economics and culture aren't going to be enough for everyone.

Anyway, a truly interesting read. I heard Ronson talk at last year's Cheltenham Literature Festival, but this was the first of his books I'd read. He's got a wonderful style - both funny and thought-provoking. He made his name with The Men Who Stare at Goats, which I'd definitely like to read.
at 12:38