The Mountain Can Wait 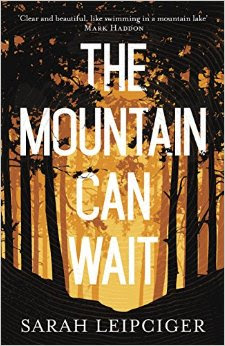 Just finished The Mountain Can Wait by the lovely Sarah Leipciger (@SarahLeipciger).

A young man is driving home from a party through the Canadian woods when suddenly a girl appears in his headlights. In an instant, he hits her, and in another instant decides to keep driving, leaving more than one life shattered.

Tom Berry is a hunter, a man who would be most content living out his days in the wilderness with just enough ammunition and kerosene to last the winter. A single father, he has raised his children, Curtis and Erin, with the same absolute dedication he brings to his forestry business, but now he's discovering that might not have been enough.

When the police contact Tom to tell him that Curtis has gone missing, Tom knows at once that only he can find his son. Tom must come down from the mountain to embark on a journey through a stunning yet scarred landscape that ends on the rocky shores of a remote island, where old hurts will finally come to light.

A haunting story of a family in crisis, The Mountain Can Wait introduces Sarah Leipciger as a talent to watch.

I've spoken before of a steady Atlantic drift you see in books such as Plainsong and Legend of a Suicide. This is definitely a book of that pacing - a short read, but not a fast burner. The prose are beautifully written, and the characters so clearly observed you could touch them.

It is a transporting book, from tree planting camps deep in the Canadian forest to an offshore hippie commune. The landscape is as much a part of this book as its people, and the level of detail is utterly convincing.

There were a few lines I particularly enjoyed: a simile about the dawn filling up the sky like pouring milk into a glass bowl; the idea of giving up on a light and fitful sleep, rather than waking from it; the idea that the land neither hates nor welcomes those who work it:

How many times had he listened to his planters theorize about clear-cut land, about the spirit of the land?...

Tom agreed that the land had spirit. But what got him was the injury they felt, the incredulity. Sure, the spirit was there where rock met sky, or in the fall of a needle to the ground, or the smell of sap on your knuckles. And it was there in a dried-up creek bed, a mudslide, a rotting carcass. But it was indifferent. It was indiscriminate.

There was also a lovely bit about rolling cigarettes, where the grandmother takes up smoking and, although she's terrible at it, insists on rolling them herself in order to earn the right to smoke each one.

In all, a very satisfying read. Also available as an audiobook.
at 16:05