So You've Been Publicly Shamed 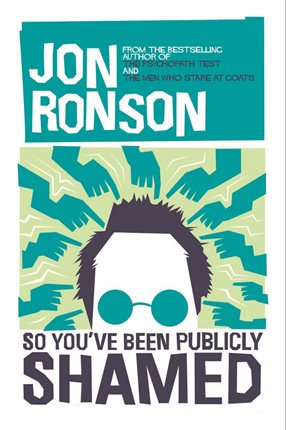 I really enjoy his style of writing. He covers some pretty weighty topics, but always in a tone that draws you in and enthuses your curiosity. I read The Psychopathy Test before, and I like the way he delves into how the mind works, and how that affects society on a wider level.

For the past three years, Jon Ronson has travelled the world meeting recipients of high-profile public shamings. The shamed are people like us - people who, say, made a joke on social media that came out badly, or made a mistake at work. Once their transgression is revealed, collective outrage circles with the force of a hurricane and the next thing they know they're being torn apart by an angry mob, jeered at, demonized, sometimes even fired from their job.

A great renaissance of public shaming is sweeping our land. Justice has been democratized. The silent majority are getting a voice. But what are we doing with our voice? We are mercilessly finding people's faults. We are defining the boundaries of normality by ruining the lives of those outside it. We are using shame as a form of social control.

Simultaneously powerful and hilarious in the way only Jon Ronson can be, So You've Been Publicly Shamed is a deeply honest book about modern life, full of eye-opening truths about the escalating war on human flaws - and the very scary part we all play in it.

He summarises really well in this TED talk below.


There is a really vicious side to social media, and I fully get this fear people now have of self-censorship. I'm perhaps the last generation to remember the precursor of the internet - FidoNet. It brings hugely fond memories with it. That warm fuzzy recollection Ronson alludes to, of a world where people are connected all over the globe. If you didn't experience it, you can't imagine the magic of a dial-up connection and a BBS. Before mobiles took off, when most correspondence was by 'snail mail' - to be able to have real-time conversations with a complete stranger on the other side of the world... you may as well have been contacting the moon.

It really brought people together.

And then it brought everybody together.

Yes, I guess trolls existed before. Since you had FidoNet/Internet, you had trolls. But on the whole, computers and online networking was created and developed by geeks. And geeks are usually quite nice people. People who get on better with computers than humans - unless those humans are communicating as green font on a CGA monitor. Geeks know what it's like to be outcasts, they revel in a silly - often inappropriate to mainstream - sense of humour, and they're creative. Take ASCII art, for example. Hugely creative.

Anyway - that's my theory. The internet was a nice place. Now it's a place for everybody, and not everybody is nice.

Whereas geeks retreated to cyberspace to escape mainstream idiocy and playground bullies, general society took cyberspace and made it the playground.

Or, something to that effect.

It's all a lot more complex than that, though. A faceless hit-and-run brings out the worst in people - myself included. I peed a little with glee at #SwineEleven. Tweeted and retweeted my share of gut punches. Naturally, I'd far rather the political right went down on a point of actual politics, but goddamn, if fellating a pig's gonna do it, log me in.

I thought the point about public shaming being banned in the first place not because people were repulsed, but because the punishments had become too brutal, was an interesting one. It's a contentious issue, but at times it seems true that the state is morally obliged to protect us from ourselves. Even if The State(tm) is made up largely of politicians we consider morally bankrupt.

I saw for myself how quick Twitter can turn. Some guy tweeted about a group of women who had been arrested for protesting a Muslim conference about 'whether wives deserve to be beaten,' by exposing their breasts on stage. They were dragged away to calls of 'dirty whores' and 'kill them'. That wasn't even a faceless assassination - that was to their faces.

As Ronson says, we were all validating each other on women's rights, and I was thinking 'gosh, what a progressive bunch of blokes,' when I made a correlation between low economic status and abuse of women globally.

Admittedly, my bad. I've fast concluded that any medium which only allows 140 characters to make your point isn't conducive to complex socio-economic debates.

All of a sudden I'm getting messages like 'fuck off,' favourited by a woman whose profile proclaims her a Christian. Really flying the flag of human kindness there, sweetheart.

I've been on the internet long enough to spot trolling, but it is terrifying stuff even in small doses.

I think what resonates is the last bit of the book. We've taken a space that had the potential to do so much amazing stuff - to be so creative and show what we can be as a species, when we pool our knowledge and ideas. And instead it's become yet another control mechanism to stifle individuality and expression.

I guess, in its way, it really has shown what we can do as a species - and sadly, that's depressing. Reminds me of Dylan Moran's spiel about no one should ever release their potential, because it's probably limited. Much better to keep the dream alive and believe yourself capable of more.

Anyway. Excellent read. Interesting stuff. Covers quite a few cases you'll have heard of. Ronson goes and meets a lot of people who have experienced character assassination at the hands of social media and looks at how it's affected them in both the short and long-term. Depressing to see how many people seem incapable (or perhaps worse - wilfully incapable) of comprehending nuance, and instead grasp for black and white. We could be so much more than a vicious cliché.