All Lies and Jest 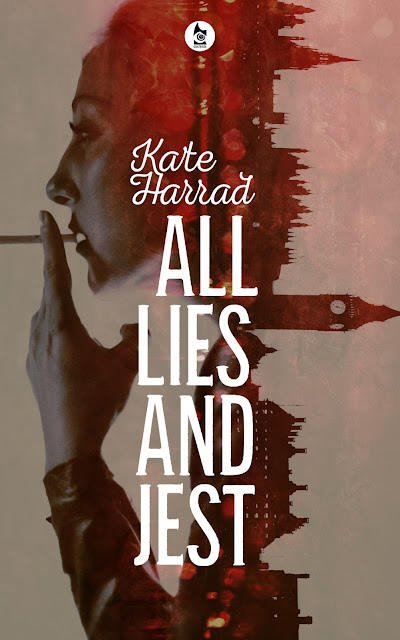 I've just finished reading All Lies and Jest by fellow Ghostwoods author Kate Harrad. You can check out Kate on Twitter (@katyha/@fausterella) and in The Guardian.

A dark, sexy subculture romp, All Lies and Jest is a novel about belief, delusion, and the dangers of being so open-minded that your brain falls out.

When the USA becomes a fundamentalist theocracy, one of its first actions is to round up all the queers, atheists, deviants, geeks, goths and other undesirables it can find, and throw them out. The United Kingdom welcomes more than its fair share. But Britain is no haven; the Christian United States wants the Old Country to follow in its footsteps, and the fundamentalist tides are rising.

Elinor Rosewood is a habitual non-conformist. As British as tea and spanking, she flees her small-minded home town for the dubious joys of London. It’s only after she arrives that she discovers that the greatest isolation can come from being in the middle of a crowd of strangers. Refusing to be defeated by a mere ten million people, she resolves to track down some interesting weirdoes whilst they’re still around to be uncovered.

Her first discovery is a lettuce-eating vampire named Stefan. He’s far too pretty (and silly) for his own good, but he’s a stellar introduction to the Jesus’ Blood Church, and to the sprawling morass of subcultures lurking in London’s cheaper pubs. Elinor plunges into the chaos, little suspecting that her quest to avoid boredom — and maybe save the world a little — will bring her into contact with crazed cultists, devout flat-Earthers, were-mosquitoes, psychopaths, Otherkin, elves, vile plots, and more corpses than you’d normally expect to encounter on a pleasant evening out.

The novel is set in a time when the US has been rebranded the CUS (Christian United States) by the God'n'Guns party, when all alternative subcultures have been banished, when people give up their iPhone for an iTem, and when it's surprisingly easy to get fitted for a pair of fangs down a back street in King's Cross.

This was a fun read, and perhaps the first time I've read a book that alternates between first and third person with such ease. All Lies and Jest was originally published in 2011, and re-released by Ghostwoods last year with a gorgeous new cover by Gábor Csigás.

If you're easily offended by digs at religion and mental health, this isn't the book for you. If you revel in that sort of thing, you'll enjoy it. It reminds me a bit of Jane Lovering's Vampire State of Mind, another good urban fantasy read.

There's a really major plot twist to this one, and it took me a moment to get my head around it. As another reviewer put it: hilarious and then horrible. But horrible in a good way. Definitely entertaining.

More recently, Kate has been the editor of Purple Prose: Bisexuality in Britain published by Thorntree Press.
at 14:00