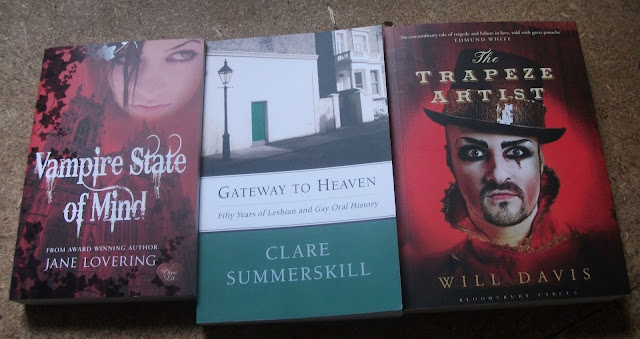 Last September I did my first turn at a literature festival: booQfest in Northampton.

There's some pictures on my Events Page, and memories earlier in the blog.

Perhaps I'm a late developer, but it was the first time I'd put together a reading list. Usually I just grab whatever's closest on the bookshelf. This time I came away with a set of books, all of which I knew that I'd read.

It took you three months to read three books? I hear you ask.

Well, no. Not quite. Soon after putting that list together, I went for a more ambitious 'Charity Shop List'. I've been alternating, one book from each pile, since then. I've got one book left from the Charity Shop pile, so I've read seven in total. Which makes me feel much better about myself, as I always thought that I was a particularly slow reader, and I only read at bed-time. That's a fairly respectable number, I feel?

Anyway. Here's what I thought, in the order I read them...

The Trapeze Artist by Will Davis

Will was giving a reading on the opening night of booQfest. He's an absolutely lovely guy, and more talented than anybody rightly deserves to be. He doesn't just write about trapeze artists - he is one. Click his name above for pictures.

He won the Betty Trasker Award in 2007 for his debut novel, My Side of the Story. He's since developed the main character from that and turned it into a free online serial called How Not to Survive.

We've done a bit of a book swapsie. As a result, I owe him a copy of Georg[i]e next time I'm in London. Hoping it'll coincide with a performance.

I absolutely loved the book. Left my review on Amazon, under the title Cirque De La Vie. Thoroughly recommend it, and think that I fell in love with Jethro the Clown, perhaps, just a little bit. I'm always drawn to the deeply damaged, rough-diamond, thwarted-in-love and suffering in embittered silence characters, but they're rarely written so well.

Jane won the 2012 Romantic Novel of the Year for Please Don’t Stop the Music.

Popped in to see Jane talk about VSoM at the festival, and enjoyed getting thoroughly sloshed with her and daughter, Vienna, at the opening night after-show party. That was certainly a night to remember... if only I could!

I must admit, this is not a genre I'd usually browse in a bookstore. Hand on heart - I judged it. I took one look at the cover and thought Twilight.

I should have had more faith. It was bloody brilliant. Vampires... in the civil service. York Council, to be precise. Thoroughly, thoroughly British, with enough originality to carry you through. Romance, with a bite.

Still, she sealed it for me at the Veyron. She gave her lead character, Sil, a Bugatti Pur Sang: "I hardly dared touch the immaculate chrome of the door; this was less of a car and more of a machine for taking your fingerprints," going on to describe it as being "strapped inside a bullet."

Look, the devil's in the detail, and I like cars. Okay?

I guarantee you, if anyone's going to turn you (into a vampire lover!), it's Jane. Great fun.


Gateway to Heaven by Clare Summerskill

A work of non-fiction thrown into the mix.

Its full title is: Gateway to Heaven: Fifty Years of Lesbian and Gay Oral History, named after a famous lesbian bar in London. It spans a 50 year period in LGBT history in the UK from the 1940s-90s. Spanning the period before decriminalisation in 1967, through to the battle for equality that followed.

I saw Clare give her reading from this, and it was excellent. She delivered each of the contributors' voices, from a broad Scottish accent through to German and Geordie. Born performer. Extremely poignant piece of work.

I've recently been following the progress of SMUG (Sexual Minorities Uganda), after corresponding with GayUganda back in 2008, shortly before the government there proposed a 'Kill the Gays' bill. I have very fond memories of Uganda, and it was a bit of a shock when that happened. There were a couple of sections in this book on the influence of the press and legal persecution of gay people that seemed to parallel certain things going on in Uganda at the time of reading. So, I packed up a couple of copies and sent them off to Kasha Jacqueline, head of Freedom and Roam Uganda and leading rights activist. Looking forward to hearing what they make of it.

It really was astonishing reading, to think how very far we've come in 45 years. People in Uganda often look to the UK with an attitude that we have always been liberal here, and that equality comes naturally on this matter. Yet I learned from reading this that it was only 55 years ago that our own Home Secretary declared homosexuality to be a 'plague,' and the media suggested it would be the downfall of Britain.

If you have trouble sourcing it through Amazon, you can buy it via her website.

So, that was my first reading list. I don't think I've done it before because I'm worried about finding one book that I just can't finish, which would feel a bit like 'failing' the reading list. OCD? Err, yes, just a little.

But it's been a fun exercise, and I've almost finished by second pile. This was certainly a special list to start with, having met each of the authors, however briefly. I was reminded of Ian McEwan at Cheltenham Literature Festival this year:

He said that he never gives books to friends, and went into the different experience readers have when reading a book by someone they know, or are about to meet. How the temptation is there to look for clues to that person's psyche in the book.

Not so much with Clare, because her book was all about other people's stories, but certainly with Jane and Will, I could almost hear them between the pages. I'm not sure whether I would have enjoyed the books any less if I hadn't met their authors, though perhaps I would never have come to read them in the first place.