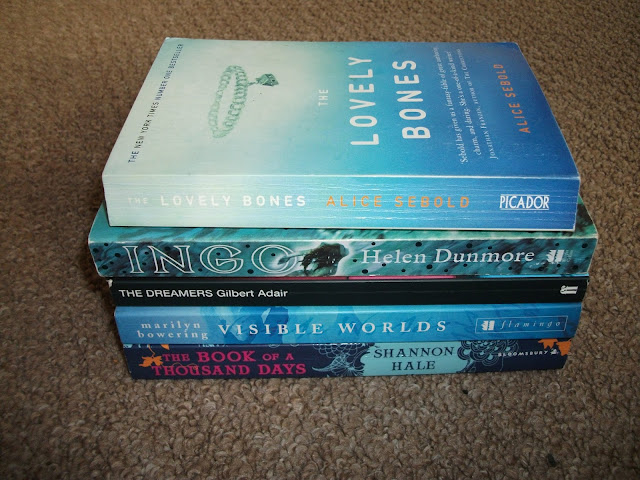 Last August, I ended up trawling bookshops with a friend in Scotland. As well as making the awesome discovery of Stirling Books, we also popped into a village charity shop on the way home. It was one of those oldy worldy charity shops where you can buy an entire dining set for 20p or a new wardrobe of clothes for under a fiver, with shoes and accessories included.

I couldn't help myself, and ended up pulling a few titles off the shelf. My selection process was fairly random, although you may - looking at the pictures - assume it was done on the basis of colour coordination.

I finished the last one in December, having alternated them with the booQfest list.

Here's what I thought, in the order I read them.

Ingo by Helen Dunmore was the last one I pulled from the shelf. I liked the cover too much to put it back. Indeed, it is a beautifully presented book. Everything, from the choice of font to the section divides, is very atmospheric.

Turned out to be Young Adult, or YA as it's commonly referred to. Not one of my preferred genres, unless it's Point Horror. However, I found myself pulled under by its connection to Cornwall and its evocative opener on Midsummer, which appealed to my heathen sensibilities:

I'm too big to be carried, but it's Midsummer Night and Dad says that's the one night when all the rules can be broken.

The next morning, he disappears from their lives forever.

I enjoyed it a lot more than I thought I might, though it leaned a little heavily on the morals of children dealing with divorce. Their father is missing, presumed dead, and a new bloke comes along. Some poignant observations on child psychology. Also, a fascinating character in the old lady who keeps bees, and the struggle between earth magic and water magic.

My only upset is that the book is a set up for a series, and I didn't know that at the time. After starting so strongly, it didn't really have much of a conclusion, because you're supposed to read the next four novels to find out what happens. At present, you can buy the whole set for around £35. Narnia for kids who love wild and watery adventures.

From YA to an extremely adult novella: The Dreamers by Gilbert Adair.

What can one say? It was a short book. In a nutshell (probably an inappropriate word to use) a brother, a sister, and their American friend find themselves with nothing to do after the cinemas of Paris are shut down, so hole themselves away in their apartment and have sex whilst a riot occurs outside.

That's sort of about it, really. Apparently it's been made into a film.

One thing that always makes me smile about stories set in Paris, is that the authors tend to feel the need to write about the layout of the streets. Perhaps it's a stamp of authenticity? Victor Hugo devoted an entire chapter to it in The Hunchback of Notre Dame, Adair throws in a paragraph or two. Even one of my favourite rainy day movies, Sabrina, goes off on a wistful tangent about which road shares a junction with which road, and how many bridges there are.

I think this one is rather of an era. The era of coffee shops and typewriters, baguettes and Bitter Moon.

I bought this one because I had seen the film, and because a lot of friends had recommended it. I'm one of these types who actually prefers to see the film before deciding whether or not I like the story enough to find out what really happened.

The Lovely Bones by Alice Sebold absolutely blew me away.

Having bought it, I was reluctant to start. I still remembered the film fairly well, and wondered whether my attention would hold. By the end of the first chapter, there was no question. It is absolutely magically written. The sort of writing you look at as a writer and think damn.

By the end, I was absolutely inconsolable. I finished up in one sitting until 4am, and I sobbed pretty much the entire way through. Haven't been that affected since The Generation Game.

It truly is worth a read, whether you've seen the film or not. Sebold's powers of emotional observation are delightful. I make it sound terribly sad, but it's hopeful, beautiful, and life affirming all at the same time. Once read, never forgotten. It joins the selective list of books I will always keep a copy of on my shelves.

I think you can probably guess why I picked this one up? Just look at that cover, it's glorious.

Another nice book to hold, like Ingo, with funky fonts and cute illustrations.

Actually, the illustrations are an interesting one as it's written in the style of a diary, with the character's sketches included. Unusual, and quaint.

The Book of a Thousand Days by Shannon Hale is also YA, but not so obviously. Sort of in the way that Shrek is a kid's film, but works quite happily on an adult level too. It's also extremely easy reading. I got through it in twenty-four hours whilst on holiday in St. Davids.

It's all about a lowly servant girl who gets walled up inside a tower with a brat of a princess. There's a prince involved, a yak, and a happy ending. It's very uncomplicated, but it's quite good fun. Apparently based on the Grimm brothers' tale Maid Maleen. There's a lovely theme within it: that you can sing away sickness, if you know the right songs.

In the same way that there's a defining ambiance around certain French literature, there's one around literature from the Americas, too. I'm not entirely sure what it is, it's particularly hard to pinpoint, but this one certainly has it.

Visible Worlds by Marilyn Bowering is a fairly docile, meandering story, much like Plainsong, or British novelist D. J. Taylor's tales of the Mid-West in Ask Alice. Not always a bad thing, but, if you're after a quick thrill, this isn't the book for you. Again, one of those 'of an era' classics.

It did provide me with one of the most impressive uses of alliteration I've seen in a while: "...in the whole wide white world of winter they have only each other."

Worth it just for that.

Hope you enjoy some of these. In retrospect, I should probably have called it the Blue List.

You never can tell what you'll find lurking on the back shelves of a charity shop. Worth taking the chance sometimes.
at 18:18