Why I Don't Write About Africa 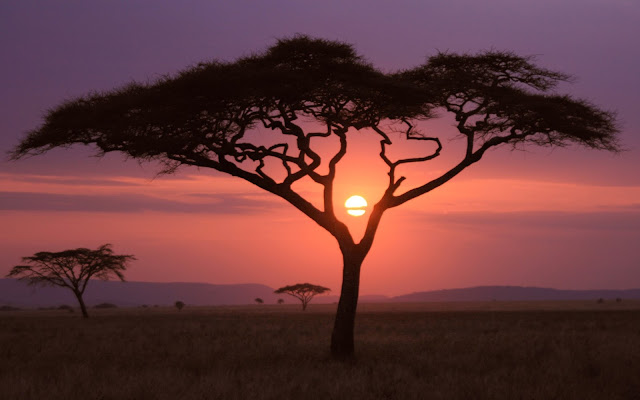 Sitting beneath the shade of an acacia tree, I reach for my laptop and open the lid, beginning my tale in Africa...

I have been asked a few times to write about Africa (always 'Africa,' rather than 'Rwanda,' which is where I live), but the conversation usually goes more along the lines of: 'Oh, you should write about Africa.'

Writers get 'you should'-ed a lot.

In the minds of many, what we've done for a living, or where we've travelled, often becomes the topic we should write about. I suppose it's easier for people to relate to tangible places, rather than the 101 imaginary places we've been in our minds and would rather write about.

During the most recent should-ing in which I was told to write about Africa, I decided to compose a post explaining why I don't, putting that question to bed once and for all.

I came up with three main reasons:

1. Escapism: Far out in front of my reasons for not writing about Africa, or Rwanda, is escapism. Fiction is my escape from reality. I suspect, though I've never taken the conversation far enough to be sure, that when people tell me I should write about Africa, they mean in a diaristic or journalistic sense. At a push, creative non-fiction. I don't think they're referring to the type of post-apocalyptic science fiction Nnedi Okorafor writes.

So, I've already told my first lie. I do write about Africa, but I write about it in my travel blog.

Just because you live somewhere, doesn't automatically mean you want to write about it. Nobody ever told me I should write about Northamptonshire when I was living there.

2. Mortality (or Heart): This is a simple one to grasp. Touched upon in Emma Newman's recent conversation with James Oswald. Writing takes a lot of time. A first draft can take anywhere from five months to a year, then up to another year to hit the shelves.

Writers, being human beings, have a finite amount of time to write as many books as they can before they die. Under no circumstances what so ever is a writer going to give up one of the hundred potential plots which keep them awake at night in order to write what somebody else thinks they should write.

Writers are very seldom stuck for ideas, but it's choosing the idea you know you can take to 100,000 words that's tricky. Your heart really needs to be in it. If your heart is besotted with a novel about Africa - go and write it.

3. Authenticity: I did once write a bottom drawer novel about Africa. Bottom drawer novels are manuscripts that will never see the light of a publisher's lounge. I have two of them to date, the other being experimental urban fantasy. These are novels either written purely for our own pleasure, because we want to explore something, or as therapy. Usually a mixture of the two. My African novel was less about Africa and more about the state of international development. I had a lot of things I wanted to say about that at the time, and fictionalising it allowed me to do so at an objective distance.

There wasn't much separation between myself and the narrator, and much of the action was drawn from my own experiences, and the experiences of close friends, so no escapism.

Sometimes we pull them out, blow off the dust and have a flick through, but mostly we just needed to get those stories out of our system before continuing to write the really good stuff.

To write something really good about Africa, something people would like to read, like Poisonwood Bible, Tail of the Blue Bird, Who Fears Death, Half of a Yellow Sun or The Other Hand, it needs to be bloody convincing. It needs rounded characters, cultural diversity, historical accuracy and a certain honesty.

If you strike the wrong key, it can be career-crushing, as Louise Linton found out.

Some stories are not mine to tell. Other people could do it better.

Which is why, conversely, I'm extremely enthusiastic about helping to promote fiction writing in Rwanda. I'll post separately about this soon.

There is a private bar at the British Embassy here in Kigali, called The Goat & Gorilla. Last time I was there, a Rwandan professor asked me what I did. When I replied that I write, he told me that was wonderful, and that more people needed to write so that they could tell the story of the genocide.

When you talk about writing here, a lot of people go straight for non-fiction and memoirs. There really aren't that many examples of Rwandan fiction available. Nakumatt and Ikirezi Bookshop offer a wide range of fiction written by non-Rwandans. Mostly westerners, but also Nigerians and some Ugandans. It can seem as though fiction is something people from other places do. I think it's also partly to do with the education drive and that mortality issue I mentioned. There are only so many hours in the day, and if a textbook will get you a job, you're more likely to read that than a work of fiction. You probably only have enough money to buy one or the other. Books ain't cheap.

Whilst the professor was explaining to me that creative writing is necessary to tell the story of the genocide, my mind turned a little dark. He was under the impressions that there was a big market out there for genocide survival stories. I didn't feel it kind to correct him, but that market was largely sewn up by white men: Season of Blood by Fergal Keane, Shake Hands with the Devil by Roméo Dallaire, We Wish to Inform You That Tomorrow We Will Be Killed with Our Families by Philip Gourevitch. That's not to say there isn't room on the market for a Rwandan author to release a memoir in English, but probably only one, and probably in the style of Ishmael Beah's A Long Way Gone. The Western-dominated book market has a limited attention span for international literature.

[UPDATE: See comment below re: publishing stats for genocide memoirs.]

In fiction, we dream our future.

Recording the past is important, but so is imagining what is to come. Even Einstein attributed his genius to abstract thinking and to fantasy. I'm very curious to see where people take science fiction and fantasy for the first time, in a country without it. And where romance and literary fiction journey in contemporary, fast-growing Kigali?

Email ThisBlogThis!Share to TwitterShare to FacebookShare to Pinterest
Labels: musings, my work