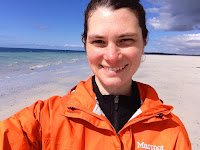 Margaret Pinard spent her first few decades travelling the globe in search of adventures to incorporate into her writing, including living in the lands of the Celts, the cities of European fashion, and several dolce far niente Mediterranean cultures. Her novels include Memory's Hostage, a historical mystery; Dulci's Legacy, a YA mystery/fantasy hybrid; and The Keening, book one of the historical drama series Remnants. She is currently at work on several short pieces and the sequel to The Keening in Portland, Oregon. Check out her website, connect with her on Facebook, Twitter, Instagram, and find her books for sale via her Amazon shop.


MGW: I'm truly happy to introduce Margaret Pinard as my guest poster today. Margaret has been an avid supporter of this blog for a long time, and it's a pleasure to feature her on it.

Margaret has written about her foray into full-time writing, and how we define ourselves as writers. I really empathise with this topic as I'm currently trying the full-time writing experiment myself and flailing about for a definition of quite what that is. I smiled a lot whilst reading, especially the part about routine. In that respect we are kindred spirits.

I was going to write about lessons from a stint of full­-time writing, and how it compares to part-­time writing. But, first of all, it didn’t seem to have much heart, and I want to be doing things whole­heartedly these days.

Second, it seemed like the factor affecting me wasn’t actually whether or not I had an outside, wage ­earning job, but rather how I saw myself. So here are reflections on a writer and her identity.

When I was working at a popular bakery cafe, it seemed like there were two sides to my day: the light side (customer service) and the dark side (writing). I don’t write dark fantasy like Marion or urban paranormal thrillers; what I mean is that it was private, quiet, reflective. Focus Time. Whereas my time at the bakery counter was often spent in cacophony, dealing in split­-second decisions and careful timing of movements in a cramped space. Multi­-tasking time.

I identified as a Writer then because I knew that the retail clerk position was not my dream, but my bread ­and ­butter, if you will. And I was keeping up with a sort of rhythm and progress on my writing and publishing goals. I wasn’t making a living writing, by any means, but it felt like enough challenging work for me to sink my teeth into, and something I enjoyed enough to continue learning about.

Now that I have had my experimental five-­month stint as a ‘full­time writer,’ I am looking again at a part­-time job that will pay my bills. The reason I had the experimental stint involved a change in personal circumstances at the bakery, and a desire for change. It wasn’t that I was ready to go whole­-hog on writing, but I thought I would dip my toe in and see what that life was like. I would spend some of my savings, get a glimpse of the issues to prepare for, and perhaps be more ready when the time came that I did want to go whole­-hog.

But how did this change my perception of myself as a writer?

There is a school of thought that says that a writer should write every day. Perhaps it is also an assumption that non­-writers make, since I am often innocently asked if I am writing ‘every day.’ (Gack!) I’ve read numerous blog posts entreating writers to try it as a productivity trick, a way to foster a writing habit guaranteed to get the wheels turning.

But that is not the type of writer, or person, I am. Instead, I have a vintage postcard above my work space that says: An artist is someone who finishes things. And that, to me, is my saving grace or redeeming glory. I have finished ​three books so far, and am working on my fourth novel. I could be tearing my hair out about it, or hating it, or obsessing over one character’s way of saying, “yes,” but I am working on it.

Do I feel less-­than because, when I have gobs of time, I am not constantly working on that novel? Often. I feel like a weakling. But do I still feel like a Writer?

I feel like I now have a better understanding of the pathologies and destructive habits of certain celebrity writers, but I also have to evolve an acceptance of the type of writer that I am. Why does it work so well in November, when I’m NaNo-­ing, to write every day? How do the words pour out, the characters jump at the chance to act, and the dramatic moments swell in my fevered imagination? Why can I not plug that electricity into another month of the year, or two, or five?

It could be because the balance of introversion and extroversion is off: no dark without enough light.

It could be Resistance, shaped as Avoidance, corroding Self­ Worth.

But the stop-­and­-start nature of my writing practice while unemployed has shown me that continued repetition is something I either rebel against or crumble under the weight of. Rules, which I often cling to, avail me nothing in my writing practice, and may even place a sort of stigma on the desired act. For there is that age-old question about making your passion your career­­ - will it survive?

It’s taken me these five months to conclude that I prefer to have some other activity take the brunt of responsibility, the heat of inspection, while I keep my writing talents in the dark, quiet corner. I still feel that I am a Writer, but perhaps my version of Writer is nursed in seclusion, like a very shy dragon. Try to get her to perform for the multitudes, or at a public fair, and she panics, beating her great spiny wings and rasping fiery breaths to destroy fields of crops, if only out of fear.

Don’t turn me into a work­horse, she begs. Leave me to my cave.

It is that ‘exposed position’ that Elizabeth George describes at which she takes umbrage. I am therefore on the hunt for a job again, so she can retreat to her cave, I can pay the bills, and then get back writing. 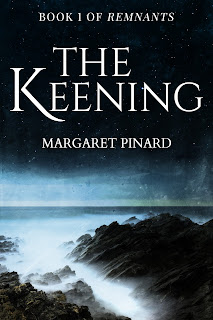 The Keening is the first book in Margaret's series Remnants. A sweeping family drama set in Scotland's Western Isles, the MacLeans struggle to stay together as their home and livelihood are attacked and the landscape they have loved for generations is changed forever.

Described by reviewers as: "Dramatic, engrossing, and a must-read."
at 19:13