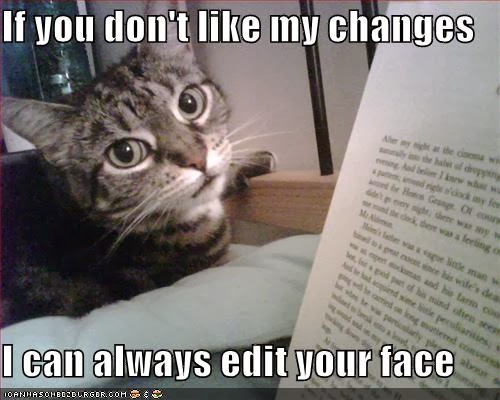 I am well and truly over Editor's Flump.

I don't care what anyone else thinks, I haven't been this revved up over my writing for quite some time. I'm loving every minute of it.

At the moment I'm happily wading into the middle of the story, the part I don't remember much about writing. You tend to remember the beginning of a story very clearly, because you spend a lot of time reading and re-reading it early on, trying to decide whether it's worth committing to. Then you usually remember the ending pretty well, because you agonise for weeks over how to get there. But the big chunk in the middle can be a bit of a blur.

At times, it really does feel as though someone else wrote it. Every now and then your eyes glide over something and you have to back up, thinking 'did I really write that?'

Having split the chapters into hefty 7-9,000 word chunks, I'm quite amazed at how much happens in a chapter. It's certainly action-packed. Fairly dark, brimming with bloodshed, lust and death, all wrapped up in some fashionable costumes and involving horses. All good books have horses in. Horses are cool.

So, yeah. I am stupendously relieved right now. It's definitely not another Nemesis Novel, which I think was my secret fear. What if it turned out to be another waste of rainforest for the 'Lost Manuscripts' draw?

I'm still shipping off the chapters to Martine in Laos. Haven't had any feedback yet other than a short and reassuring line that it's hanging together well, and that she's enjoying it. Let's hold on to that thought before the onslaught of corrections start flooding in.

Also, something miraculous has occurred!

There is a really, really annoying fact-check I couldn't get around, involving the spelling and location of a river in a rural part of Iran. I had one Wiki source to go by, and anybody who knows Wiki knows that you never base your facts on one entry. You've always got to verify them.

Then, I tried CouchSurfing.

I've known about that site for a long time, having been both a host and a surfer in the past, but for some reason I just hadn't though to use it for research.

One hour and two e-mails later, I had the answer! Plus some interesting linguistic info I hadn't known before. The place had a Farsi name that I'd heard about, which alluded to a cow who fought a lion to protect her calf, the placename meaning 'lion' + 'milk'. But in the local language it also meant 'wet place', because it's built where two rivers meet, and is famed for its bridges. This suited me perfectly, because the house in my story is situated right where the rivers meet. That last fact won't go in, because I can't think of a neat way to do it, but when you learn things like that it gives you a sort of glowy feeling that you're on the right track, and that your story wants to be told.

Big 'thank you very much' going in the Acknowledgements for that one.

I'm in such a good mood, I thought I'd share a couple of short bits I've been enjoying most.

They are riddled with typos and littered with awkward alliteration, but Novel Idea is about sharing the process with you. Mess is all part of that process, like a Morcheeba song, and we should revel in it.

I've been revisiting this passage from the 40,000 word mark, only the line zoetrope has been changed to a daedalum.

I love words with Z in. You don't get much of a chance to use Z very often, so when the opportunity presents itself you sort of feel as though you owe it to the letter.

But zoetrope was more of a patent of the daedalum, which predates it etymologically and would fit within my dates better. Also, the daedalum 'was popularly referred to as "the wheel of the devil"'... what author could resist such a thing?

I've had a little fiddle with the bit from 60,000 words in. Instead of laughing and looking away, we're turning away, but there's still something about this passage which makes me smile.

It could be one of my favourite parts in all the book, because it is a defining moment, after which things take a turn for the (even more) sinister.

One of those moments where you could change something, but you don't, so fate crashes on regardless.

Okay, okay, on to something fresh.

This is a piece of narrative I rather like. It's a bit messy. The penultimate line is too much of a tongue-twister to stay, so it won't look exactly the same come the final edit, but I do like it nonetheless. Sometimes you just have to get the words down, then figure out how to fit them together afterwards. That's what editing's all about.

By the time our horses drew to a halt outside his apartment, I was no longer feigning sleep. He must have carried me to my room, for I have the strangest memory of hands undressing me. Not his, they were far too soft. All the time, whilst my clothes were being removed, voices rose and fell like the tides of the sea. I could not make out the words, or perhaps they were sung in another language, yet I recognised it as the most painful of ghazal; a song of love enduring heartbreak, enduring death itself.

At one point the song rose to such delicate pathos that I felt as though a cord had been pulled from my privates to the crown of my head. The very fabric of my being burned with flames of grief, the blistering pain of mortality blissfully defiant of oblivion.

I breathed in the dragon of the dawn, and it ate my soul.

I'm going to have to chew on that last bit for a while, but a top tip for editing: your first guess is usually your best guess.

But one thing I've noticed time and time again whilst editing, is that I will change something, only to return and change it back again. If you find yourself caught in uncertainty, what you wrote originally is likely to be the best word or phrase for the job, you just need to change the rough edges around it. Sometimes nothing more than an at or an of or an and.

This story is heavy on descriptive and lower than usual (for me) on dialogue. What follows was a bit of a gamble. It's a conversation between two characters at a masquerade ball, but the topics they cover tie the story very much to the historical world of our own past. The story is only very loosely historical, the characters are complete fiction, so it's sometimes a little dangerous to bring them too far into true history. It runs the risk of sounding unnatural. I think this falls just the right side of character affirming, rather than plot destroying.

The conversation is between the daughter of a Shah, who is in disguise, and her companion, the Iranian-Italian son of a philosopher, who is dressed as a jester. They have only recently met, and she is opening this scene.

“Tell me, what are your father’s philosophies?”

“He had the heart of Aristotle, but the pragmatic acceptance of Machiavelli.”

“I do not understand.”

“Well, Aristotle was a Greek. They invented the concept of democracy, whereby the populace consent to be governed. He believed that true democracy occurs only when those with the least, rather than those with the most, hold rule. Machiavelli was a Florentine. He saw democracy outstripped by wealth and power every time, and concluded that although love and consent are admirable, given the opportunity, it is always better to be armed and feared.”

“They both were, but moral rightness is secondary to might, which would make Machiavelli the most right of the two.”

“He wrote an entire thesis on governing nations. It is a shame the Shah can’t read Latin.”

“Why would the Shah have need of a Florentine philosopher?”

Ludevico reached for a slice of dried mango. He tore a strip with his teeth and chewed thoughtfully.

“This dynasty has run its course. The Shah has made all the fatal errors of statesmanship. He has strengthened his enemies, deferred to them, and not only invited foreign forces in, but allowed them to walk out with half of his country’s resources.”

I felt cold hearing this. Nobody had ever spoken so honestly to me, for everyone had always known who I was. Suddenly, I longed for Shusha’s kind smile and quick mind. Someone to explain what this man was telling me of my own family’s failings.

“Which foreigners?” I asked.

“He refuses to pick between the Turks and the Russians, so neither despise him but neither will help him either. He’s auctioning off every asset to the French and the English, and even my mother’s people, for whatever price they are willing to pay him. Where do you think the money for nights like this come from?”

“The Shah is rich,” I replied.

“Was rich. Half the female population of the country has joined his harem. Since murdering his friend and former adviser, few statesmen trust him, and no one can abide his mother.”

“You talk liberally beneath his roof.”

“That is why we spend most of our time in Milan. Our family runs the fault of liberal thinking. We are tolerated because of our wealth, though wealth is worth little behind bars, where we have long suspected we may all end up.”

“That does not frighten you?”

“Of course it does. Sadly, philosophy leads us to contemplate the implications of our lives beyond merely our lifetime.”

“Oh, so you are a philosopher also?”

He smiled and took another bite of mango.

“Enough of philosophy, let us talk of beauty. It is far more engaging.”

“I don’t know,” he said, glancing around. “That lady over there, perhaps?” He inclined his strip of mango towards a woman in a peacock-feathered dress with a mask of equal splendour. “Or perhaps that one over there?” He raised his chin towards another woman in a snow-white gown, her bosom as wide as watermelons. “No,” he said with a sigh. “I would rather talk of yours.”

“How do you know that I am beautiful when you cannot see my face?”

“Your eyes are beautiful, and your voice. Your figure is beautiful, as is your hair. What could possibly be imperfect in the small space between your left ear and your right?”

He pulled himself up and traced a finger along my jaw.

I held his wrist to prevent the progression of his finger to my lips.

“Many things may be uglier than you imagine.”

His eyes held mine, uncertain what to make of my warning.
at 17:23