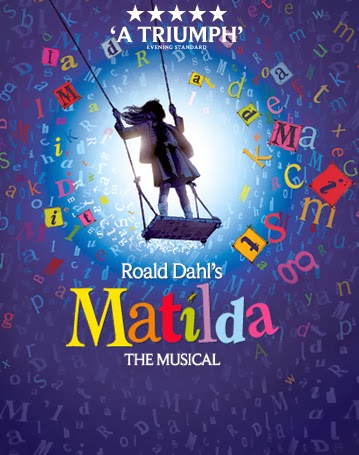 You knew it would be, because it's Tim Minchin, but it was excellently cast, and so well acted. As for the stage design - too clever for words. The Curious Incident of the Dog in the Night-time was extremely clever too, and it was certainly along those lines, but that's quite a tough story that you really have to think about, whereas Matilda is unadulterated fun. It was wonderful to hear the whole audience laughing along. So much imagination went into everything. It was a story about telling stories, and how much we all love stories - until we grow up.

Or, even when we grow up, in this case.

Bertie Carvel, who plays The Trunchbull, is just spectacular. It's hard to believe it's his West End debut, he completely embodies the character in all her cartoonish, larger-than-life terrormongering wonder.

Possibly the thing I like best is summed up in the number below, with the lines: Just because I find myself in this story, doesn't mean that everything is written for me. It's such a healthy, strong and important message for both young and old in the audience. If you don't like the story, change it.

Ending on a fun A-B connection. Tim Minchin wrote the music and lyrics, he performed on Jonathan Ross with Jamie Cullum, who is married to Sophie Dahl, who is the granddaughter of Roald Dahl, who wrote Matilda.