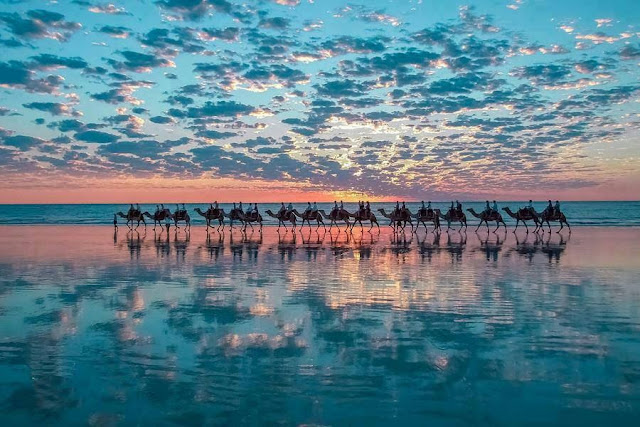 I didn't think I'd have time to write any more before heading off on my Autumn Road Trip, but I've had the house to myself the past few days and managed to add another four-and-a-half thousand to the word count.

Slightly annoyed I've missed the sixty-five thousand mark by 500 but decided I'd rather hold out and write well than push for it and mess up. I slowed down a bit because I realised that the story was in danger of fracturing into a few possibilities and I needed to be sure that I could weave all the threads together by the end.

As one writer mentioned in a forum recently, and I'm going to have to paraphrase badly because I can't remember exactly where I read it: "Writing for me is like an adventure in the fog. Once I can see the end, it's over."

I feel very much the same. I discover the stories as I write them, much as I've heard sculptors talk of their work as uncovering the faces within stone or wood. The final moments of a story generally fall into place within a few thousand words off the end. If they come any earlier there is the danger of the writer losing interest. You write to find out what happens. Once you know, what's the point?

Then there is the other danger - and the problem that sometimes leads to block - in that you cannot see anything ahead of you at all. The fog is so thick it suffocates. It's quite a gamble setting out to write 70,000+ words without knowing what will happen. What if nothing happens?

Sometimes you need to stop writing and step back for a moment. In this case I knew it was time because my descriptive was becoming commonplace. It lacked imagination because I was struggling to imagine what comes next.

Always stop when you're struggling. The danger of pressing on is that, yes, you may end up with words, but will they be good words? If they're not good words you'll either be disappointed - especially if they've been good words up to that point - or you will need to go back and rewrite them at a later date, thus creating further work for yourself.

Worse, you might write yourself into a plot glitch that screws up the rest of the story, and it's far harder to go back and unpick a plot after five or six thousand words than it is after a couple of hundred. Be alert to loss of direction. This is different to not knowing where the story is going. You can be lost and still have direction. Sometimes the mere fact of being lost enthuses you to find your way out. Loss of direction is that point at which you not only have no idea where the story is going (acceptable, even exciting) but you have no idea what you're doing at this moment in time either. Intellectual flat-lining.

Everybody has different ways of getting around this. When my own inspiration is drained I attempt to kick-start it off the back of others. When I can't write myself, I tend to read a lot. I'll watch movies and listen to music. Sometimes I seek out art or writers from the period in history I am writing about, to try and immerse myself in that world. Sometimes it's enough to read something completely unrelated, written by a fabulous author. Brilliance in others is often motivation enough to aspire to be brilliant oneself. Feelings, emotions and sensations are all fuel for the imagination, be they on screen or out of doors.

A slightly more specific tool that I tend to use requires a blank sheet of paper and a cheap biro. It's true that I can never usually see the end of my stories until I get there. If I can, there is always room for a few twists and turns along the way. However, I can usually see with some clarity a few vivid moments up ahead.

Let's take a love story, for instance. The end: will it be happy? Will the two lovers walk off into the sunset? Or will it be a tragedy? Will they be star-crossed and cruelly thwarted?

Of this I am not yet sure.

So, what am I certain of?

I see very specific moments. Some have to happen, because the plot demands they happen. For instance, if someone is going to hatch a dastardly plot, they need an accomplice. If they have an accomplice, they need to explain the plot and cultivate their relationship. Other details are added simply because I like them. It suits my tastes to have a banquet and a masquerade ball and a midnight tryst. They're pretty and dramatic and a little bit sinister.

None of these scenes are complete. They are simply sketches. Outlines of fairly solid ideas that require:

The first isn't worth worrying about. You'll colour in the picture when you get to it.

The second is a bit more important.

When I stop to write down these little scraps of scenes, I don't give them an order. The reason I have stopped writing is usually because I don't know what comes next. It is only by ditching ridged chronology that you get around this type of block, because ridged chronology is what's causing it. What's more important is what might happen - what you want to happen - rather than when it happens.

I take a blank piece of paper and very loosely name each scene and each important character randomly across the page.

Once you have these ideas on paper, that's when you can start to reconstruct the timeline. The fear that there is nothing more to write has been removed. There are clearly moments in the future that you want to write, so now you can consider how to get to them.

Some things must happen in a certain order for them to make sense. For instance, the masquerade ball must come before the midnight tryst. After all, who agrees to meet someone by a river at midnight unless they already trust them implicitly? Only a lover would go, so they must already be in love.

Other things might be far more malleable. Does the uncle kill the dog early on, simply to show what an evil character he is? Or does he do it after learning about the lovers' tryst, out of jealous? Perhaps the dog is already known to him through some earlier altercation and this is revenge? In which case, another scene is needed.

The things that must happen in a certain order help to spur on the overall story arc. The things that are slightly more negotiable can act as padding, or bridges, to get you from one major scene to the next, or as starting points to develop new scenes to explain how they came about.

The purpose of this is not to plot out an entire story. As mentioned, that's a quick way to kill enthusiasm in a writer. You don't want to know everything, you want to discover everything as you go along.

Instead, it is firstly a way to alleviate panic: that sense that there is nothing to write about. Secondly, it is a way of kick-starting imagination. You have story dots on a page, now it's time to join them up and see what the picture is.

At some point I will scan a copy of one of my doodles so that you can see what it looks like. It can be as neat or as abstract as you like. No one's going to hang it on the wall, the important point is that it helps you map your way to a completed novel.
at 02:19