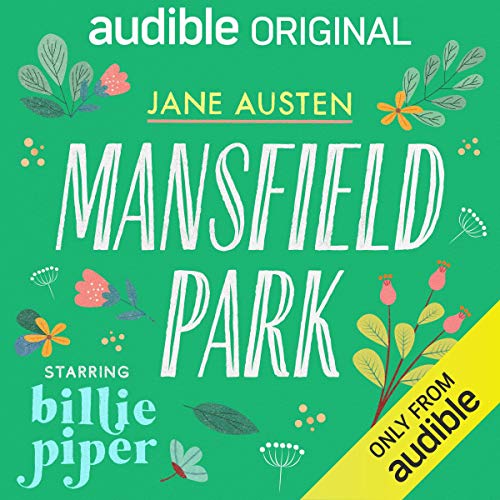 Amazon were giving this away, so I took a copy. It's still in my library, but when I click on it to copy the blurb, I now get, 'We're really sorry, this product isn't available.' So, I'm not really sure what happened there. Here's the blurb from another copy:

Taken from the poverty of her parents' home in Portsmouth, Fanny Price is brought up with her rich cousins at Mansfield Park, acutely aware of her humble rank and with her cousin Edmund as her sole ally. During her uncle's absence in Antigua, the Crawford's arrive in the neighbourhood bringing with them the glamour of London life and a reckless taste for flirtation. Mansfield Park is considered Jane Austen's first mature work and, with its quiet heroine and subtle examination of social position and moral integrity, one of her most profound.

I am not a massive Jane Austen aficionado. Like everybody, I do like Pride & Prejudice. Like many, I prefer the screen adaptation more than the book. Unlike many, I actually prefer the 2005 film to the 1995 TV series. I was 14 when the TV series came out and vividly remember my mum telling me to hush as I came into the living room just as the pond scene was about to take place. I did not understand it at the time, but came to in later life.

Other than that, I really don't know much Austen, which is shown by the fact I chose this one because I got it confused with Northanger Abbey. I really loved The Jane Austen Book Club, I mean, hugely so, and that made me want to read Northanger - but it quickly became apparent, this wasn't it.

And, on that total tangent, it was because Grigg read The Mysteries of Udolpho in The Jane Austen Book Club that I fell down the rabbit hole of Ann Radcliffe and picked up a copy of The Romance of the Forest. So, y'know, stuff leads to other stuff.

Anyway, back to Mansfield Park.

This one really wasn't for me.

Fanny Price and Edmund Bertrum just didn't seem to have anything about them that was interesting. I'm wondering whether the copy I received is an adaptation or unabridged, but either way - just no. A friend said it was a comedy, but I didn't laugh once.

It didn't feel entirely developed. Henry Crawford seemed to go from being just a bit of a gadabout to being the worst kind of man in a couple of pages, doing a Wickham and running off with a married woman. Yet, I couldn't help thinking it was actually Crawford who dodged the bullet there. Fanny was just so boring.  Meanwhile, there's no reciprocal spark of romance from Edmund until five pages from the end when he suddenly declares his undying love. I mean, what now?

I loved P&P, the chemistry just sizzled through it, but this was a bit of a wet fish in comparison, and came right on the coat tails of the former's success.

It's kind of put me off reading any more Austen.

[UPDATE: I feel slightly vindicated on this one, since apparently Asuten's own mother called Fanny Price 'insipid'.]