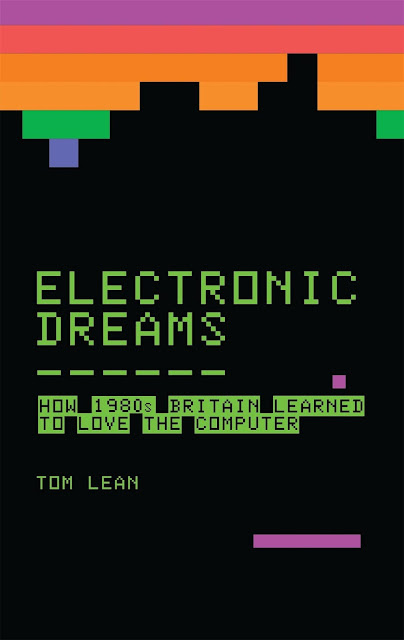 From the ancient world to the modern, I picked up a copy of Electronic Dreams: How 1980s Britain Learned to Love the Computer:

Remember the ZX Spectrum? Ever have a go at programming with its stretchy rubber keys? Did you marvel at the immense galaxies of Elite on the BBC Micro or lose yourself in the surreal caverns of Manic Miner on the ZX Spectrum? For anyone who was a kid in the 1980s, these iconic computer brands are the stuff of legend.
In Electronic Dreams, Tom Lean tells the story of how computers invaded British homes for the first time, as people set aside their worries of electronic brains and Big Brother and embraced the wonder technology of the 1980s. This book charts the history of the rise and fall of the home computer, the family of futuristic and quirky machines that took computing from the realm of science and science fiction to being a user-friendly domestic technology. It is a tale of unexpected consequences, when the machines that parents bought to help their kids with homework ended up giving birth to the video games industry, and of unrealized ambitions, like the ahead-of-its-time Prestel network that first put the British home online but failed to change the world. Ultimately, it's the story of the people who made the boom happen, the inventors and entrepreneurs, like Clive Sinclair and Alan Sugar, seeking new markets, bedroom programmers and computer hackers and the millions of everyday folk who bought in to the electronic dream and let the computer into their lives.

Really entertaining read and highly nostalgic. I spent many happy - and exhausting - hours wandering around Olympia with my dad as a kid, visiting the huge tech Expo they used to have there each year. I think one of my strongest memories was being captivated by the graphics on Kings Quest Seven and thrilled to go home with a copy.

Computers were such a huge part of my childhood. My dad was an early enthusiast, so I played Paddington Bear, Paperboy and other games on the ZX Spectrum - he still has a working one. My Uncle Clive was big into computers and had an early Mac. I remember spending hours playing Shufflepuck Café on that and being so disappointed that there wasn't a version for PC.

Before all that were the text-based games like Escape from Titanic, The Hobbit and that one where you played Denis Thatcher, trying to find a drink in 10 Downing Street without getting caught by Margaret. That game was actually mentioned in this book. Then, in my teens, discovering MUDs and losing myself in those for hours.

There were a couple of things I felt it missed out, which played a huge part in my experience of computers growing up. The first was the switch from CGA to VGA monitors. That had a massive impact on gaming. I remember playing Lemmings in magenta and cyan, then seeing it in full colour on a VGA. That was quite something.

The other thing I was surprised didn't even get a mention was Fidonet. I ran up huge phone bills dialling international BBSs, such as Demon's Domain and Carnac, searching for the esoteric.

Just reading the book brought back so many memories of random games like Pipe Dreams, one where you used the mouse to shoot targets, and one with a cat called Niko who went from window to window. So many I remember playing but don't entirely remember the names of.

I bought dad a copy of this, and he loved the nostalgia too:

Just started but really well researched/written. Remember the Speccy (still have it) n was saving up for a Dragon when Amstrad hit the market 😊Also brought back memories of early Leicester making a bit of extra cash punching data cards to input into early academic puters. Loved the bit about the role of early Dr Who in demonising computers 👿😄

I've always credited a love of RPG games, such as Monkey Island and Day of the Tentacle, and early involvement in MUDs as being a key driving force in my own desire to write and create stories. Whereas I completely understand parental concerns over kids playing computer games for hours on end, I was like that, and I think I turned out okay. RPGs were great for teaching you problem-solving skills and introducing the entire concept of worldbuilding. MUDs were just amazing for that. When you saw people walking around and interacting with a room you'd built, it made you want to write better, and to imagine bigger things.

I'm sort of bummed that I missed the really early days of BASIC and learning to code. I recently tried to find a decent Python course online, but it was dreadful. They basically took a programmer and sat him in front of a screen, explaining what he knew. There was no awareness of where beginners are starting from or how people learn. Apparently, it's rare to find a programmer - or a programming course designer - with experience of teaching. I've always had a passing interest in coding, but always felt I was too far behind to catch up. If a better course presents itself, I might give it a go, so please do drop suggested links below.

Anyway, really enjoyed this book. If you're British and grew up in the 80s and early 90s, you'll recognise a lot of what's in here, and hopefully it'll bring a smile to your face.