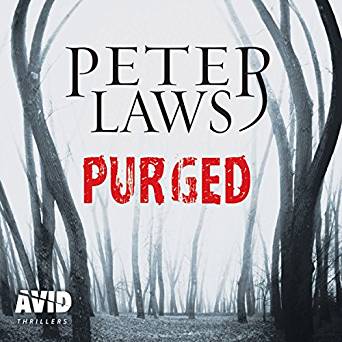 My friend Emma introduced me to Peter Laws's writing last year. I started out with The Frighteners, which is an excellent exploration of why we love to be spooked and downright jellified by films and books. Really was a very entertaining and sage read. Highly recommended.

Because I enjoyed that so much, I picked up one of his fictional works, Purged:

Matt Hunter lost his faith a long time ago. Formerly a minister, he’s now a professor of sociology writing a book that debunks the Christian faith while assisting the police with religiously motivated crimes.

On holiday in an idyllic part of Oxfordshire where wooden crosses hang at every turn, Matt’s stay becomes sinister when a local girl goes missing, followed by further disappearances. Caught up in an investigation that brings disturbing memories to the surface, Matt is on the trail of a killer who is determined to save us all.

Laws is an ordained priest, who picked up the nickname the Sinister Minister. His Instagram and Twitter accounts are good fun, and you can find his website here. He does bear a passing resemblance to Dominic Cooper in Preacher.

Growing up, I devoured horror novels, though over the years it's slipped off my shelf, largely replaced by literary fiction and non-fiction tomes. I do still watch quite a few horror movies and Netflix series, like The Haunting of Hill House and Typewriter, so I was looking forward to it.

It was full of wonderfully dark humour, with some nice one-liners:


He could tell he was getting nearer to his house because gangs of youths started to shimmer out of the concrete with hoods up like medieval monks with ASBOs.

... what he didn't expect to see was a gang of about twelve protesters. They stood by the huge wooden gate looking lobotomy-level bored.

And, as you'd expect from a novel about a minister who's lost his faith, there was a bit of back-and-forth on the meaning of life and the existence of God, but it seemed to land more on the side of cynicism, which is obviously interesting when written by a minister who doesn't appear to have lost his faith. The Frighteners goes into Laws's perspective in far more depth. He's extremely relatable and, I'd say, more than a little brave for writing horror whilst in his current profession.

It's an easy read, and doesn't disappoint on graphic description, with some notable moments involving lip removal and running over a fox. I think there was a similar scene in Ian Watson's Meat, if I'm not fogged by time. There's such a horrific dilemma about what to do with a terminally injured animal when you're not naturally a killer.

Suitably creepy, with doors that creek like a 'Bela Lugosi coffin' and a host of characters you're just not sure whether to suspect or not, because they're all isolated-cult-type weird.

If you like a good whodunnit with a twist of exorcism, this is right for you.
at 08:14