Grimm Tales for Young and Old 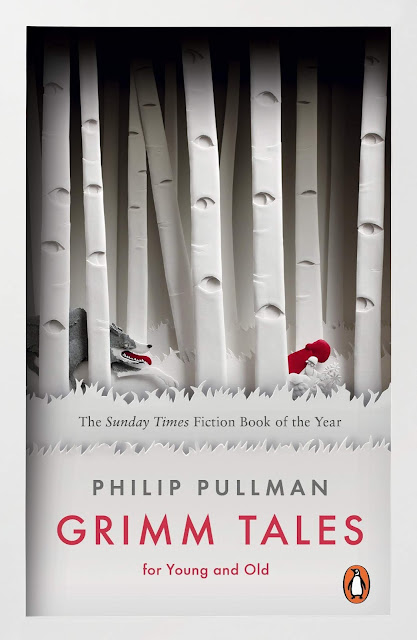 Last book review for a little while. This is Grimm Tales for Young and Old, a retelling of many of the Brothers Grimm stories by Philip Pullman, author of His Dark Materials and the Ruby in the Smoke series.

I was lucky enough to pick up a signed copy from the Cheltenham Literature Festival in 2012, where I saw him speak for the launch of this.

Shamefully, due to travel and life, it has taken me this long to get around to reading it. Seemed like a logical follow-up to Mythos, and to Peter Laws's Purged, as it also has a forest on the cover.

Growing up with large tomes of illustrated fairy tales, I knew most of the stories in this, but it had been a really, really long time and it was nice to have a refresher. I realised that I get a bit confused between Brothers Grimm and Aesop's Fables. I was waiting for the fox and the stalk to try to have supper together, and for the dog to climb into the manger. When you're a kid, you enjoy the stories, you don't really care where they come from, so you don't always remember who said what as an adult.

There were certainly a few in there that I definitely hadn't heard before, such as Hans-my-Hedgehog, The Three Snake Leaves, The Boy Who Left Home to Find Out About the Shivers, Godfather Death, Gambling Hans and The Girl With No Hands. Many of which are extremely dark when you sit down to think about them.

Other stories seemed to splice together in modern retellings, such as Snow White and Briar Rose, both lending elements to modern tellings of Sleeping Beauty, and Bearskin having slight echos of Beauty and the Beast. Many of the old stories share elements such as wicked stepmothers, witches and journeying into the woods. There are also parts that get left out of many modern retellings, such as the Prince in Cinderella tarring the step to snare her slipper as she runs away. I think that crops up in Into The Woods, but doesn't seem romantic enough for many adaptations. Neither does the fact Cindarella gets birds to peck out the (actually, not ugly) sisters' eyes. There's a lot of swift and extremely violent punishment for wicked deeds.

You can find a huge collection of Grimm tales in both English and German, here.

I really enjoyed the introduction. Pullman explains the nature of fairy tales very well, and what makes them a unique form of storytelling.

There is no psychology in a fairy tale. The characters have little interior life; their motives are clear and obvious. If people are good, they are good, and if bad, they’re bad... The tremors and mysteries of human awareness, the whispers of memory, the promptings of half-understood regret or doubt or desire that are so much part of the subject matter of the modern novel are absent entirely. One might almost say that the characters in a fairy tale are not actually conscious.

The most fitting pictorial representation of fairy-tale characters seems to me to be found not in any of the beautifully illustrated editions of Grimm that have been published over the years, but in the little cardboard cut-out figures that come with a toy theatre. They are flat, not round. Only one side of them is visible to the audience, but that is the only side we need: the other side is blank. They are depicted in poses of intense activity or passion, so that their part in the drama can be easily read from a distance.

The speed [of storytelling] is exhilarating. You can only go that fast, however, if you're travelling light; so none of the information you'd look for in a modern work of fiction – names, appearances, background, social context, etc. – is present. And that, of course, is part of the explanation for the flatness of the characters. The tale is far more interested in what happens to them, or in what they make happen, than in their individuality.

The fairy tale is in a perpetual state of becoming and alteration. To keep to one version or one translation alone is to put a robin redbreast in a cage. If you, the reader, want to tell any of the tales in this book, I hope you will feel free to be no more faithful than you want to be. You are at perfect liberty to invent other details than the ones I've passed on, or invented, here. In fact, you're not only at liberty to do so: you have a positive duty to make the story your own. A fairy tale is not a text.

...the substance of the tale is there already, just as the sequence of chords in a song is there ready for the jazz musician, and our task is to step from chord to chord, from event to event, with all the lightness and swing we can. Like jazz, storytelling is an art of performance, and writing is performance too.

You can read more in: The challenge of retelling Grimms' fairy tales.

I did enjoy this collection, but found myself drifting in and out a bit towards the end, as many of the stories do share similarities, and the flatness of the characters starts to get a bit predictable. It's more a book you want to dip into, maybe read one chapter a night, than try to complete straight through. More a book to be read out loud to someone.

Like Mythos, it's a good grounding in the classics, but I must admit to enjoying modern retellings with a bit more depth, like Circe. It's interesting to listen to the originals, but it's delicious to dive into them and tear apart the thoughts and feelings of characters who at first seem so straightforward. That's just the way my mind works, but you need to know the originals before you can start to mess with them.

Speaking of which, I messed with Red Riding Hood, Snow-White and Rose-Red, and Donkeyskin in The Tangled Forest collection (UK/US). If you like dark adult retellings, it might be for you.

Grimm Tales is for both young and old, but like I say, there's some dark stuff in there which is often missing from the beautifully illustrated fairy tale books for children. As a child though, I loved dark stuff. Many kids are drawn to it. They go in search of the shivers. And the stories we hear as children often stay with us a lifetime.
at 15:28