Give Me My Chocolate or the Turtle Dies 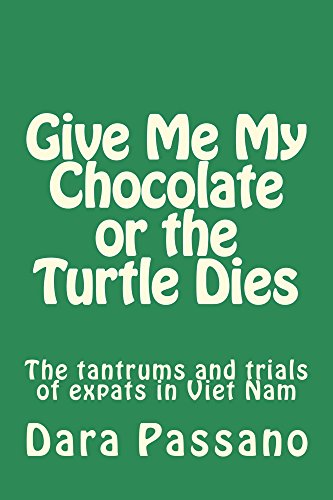 I've just finished reading Give Me My Chocolate or the Turtle Dies: The tantrums and trials of expats in Viet Nam, by the talented travel writer and aid worker, Dara Passano.

It's a warts and all exposé of life as an expat in Vietnam, but so much of it could apply to many other countries. I nodded along sagely with the issue of having clothes made to fit the size the tailor thinks you should be, rather than the size you actually are.

When you first came to Vietnam, you were blown away by the idea of having a whole new wardrobe handmade to your specifications. You stayed up late paging through designer catalogues and surfing fashion websites and even sketched out some of your own ideas ('They're nothing, really,' you said flippantly. But oh, were you proud). You spent whole weekend picking through the fabric market. Friends recommended their tailors to you and you went from one to the other during lunch breaks. During weeks of lunch breaks. You wanted everything to be just right.

Then you went for the first fitting and were... a little disconcerted. The tailor swore she could fix it. You tried to believe her. One week became two became six. By the time you got your clothes back you were desperate. And they were dreadful. Well, one-third was pretty good (though not exactly what you had in mind) and one-third was so unwearable you couldn't possibly use them for anything more public than mulch.

Then you noticed that it was these most unwearable creations that had ruined the nicest fabric.

This is when you cried.

We've all been there - several times.
Also identified with the issue of asking how long something, such as ear-splitting building work that starts at 6 a.m., is going to finish, only to be told 'soon' - which could mean anything from tomorrow to (more likely) five weeks.

The part about teaching English:

And no one will ever remember the difference between 'he' and 'she'. Fascinating.

Same in Rwanda, gender pronouns just ain't a thing. I admire this, you don't change the way you speak to someone, or what you call them, based on whether they're male or female, but it can lead to confusion when editing English reports - one moment the leader of the co-operative is holding a meeting in her local community, the next moment he is handing out leaflets to everyone.

Something that reminded me of visiting my friends Ruairí and Martine in Laos several years ago, because it's the same there as Vietnam:


... the law of the street says that the biggest vehicle is always at fault [in a traffic accident] (except in the case of buses, who may each merrily slaughter several people and untold potted plants per annum).

That's really a thing. Doesn't matter what happened, the largest vehicle is at fault.

Two days ago, I was in a fairly hairy collision in Kigali. I was taking my cat to the vet when my taxi driver decided to pull straight out in front of a cement mixer. It was absolutely my driver's fault, no question, but under Laotian/Vietnamese custom, the cement mixer would have been at fault. An interesting concept.

Each chapter of this book has an entertaining quiz to work out how fresh off the boat you are, or how much of a jaded long-termer. For instance: How Keen are You to Karaoke? and How Well Do You Bargain?

It's a book that needs approaching with a large pinch of salt. Travellers full of dewy-eyed optimism might not get on with it as well as people who have lived abroad for many years and become one with the daily frustrations that come with long-term expatriation.

That said, there's a rather touching bit towards the end on counter culture shock and the sense of dislocation long-term expats often feel when returning to their country of origin. It also acknowledges the way expats can build up their home countries as beacons of efficiency. A delusion which is quickly dispelled when you eventually do take a trip home. I was nodding vigorously along when she spoke of returning to the US:


I was on the phone for three days trying to find a way to get my internet connected and was snapped at and hung up on so many times I wanted to force-feed the operators burnt fish sauce. Their only redemption was transferring me to a call center in India.

The Indians were nice. They could not give me internet, but they did give a bit of love. I thanked them. Sometimes I still call them when I am lonely.

It's a fun read, even for those expatting it in other countries than Vietnam.

If you find yourself nodding along with a significant amount of it and need a little extra support, you might like to consider joining Grumpy Expat.

You can also read some of Dara's fiction here, and her Guardian column here.
at 11:34