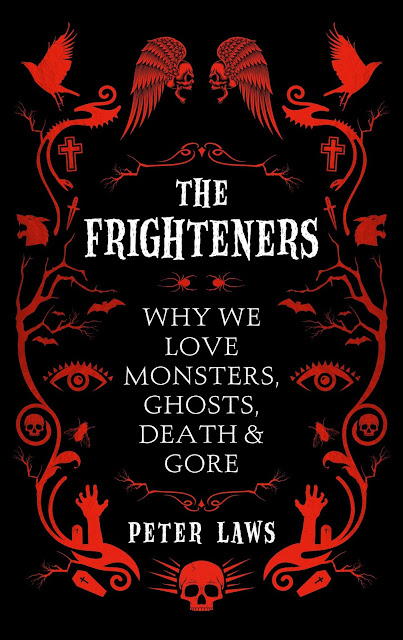 Huge thank you to my friend Emma at Beeutiful Creations for putting me on to this one. Also, for making the best honey in Rwanda.

The Frighteners: Why We Love Monsters, Ghosts, Death & Gore by Peter Laws, the Sinister Minister - seriously, an ordained minister.

I like this book a lot. Ronsonesque in his sincere desire to work out why people do stuff, and an avid horror fan himself. From vampires and werewolves, through to ghosts and serial killers, it's a tour de force of all that's fantastically freaky. But as well as being multi-genre in his approach, it's also multigenerational. It looks at the role gore and goosebumps have in child psychology, what we gain from it in adulthood, and where it takes us towards the end of our lives.

Laws is also a columnist for Fortean Times, which I was a huge fan of in my youth. I used to catch the train between my mum's place in the Midlands and my dad's place in Croydon once a fortnight in my mid-teens, and I'd religiously stop at John Lewis's in Euston Station to pick up a copy. This was back in the hay day of the X-Files, so the whole world seemed tinged with the paranormal.

There's quite a few interesting statistics included. Things such as audiences flocking to horror movies in which people like themselves die. Such as teens flocking to teen slashers, men flocking towards apocalyptic bloodbaths and women, strangely, flocking towards horrors where women are the hunted. This is all apparently linked into our unconscious need to work through our worst fears in a safe environment. Or unleash pent-up aggression in an acceptable way - without actually harming anyone. Something also seen in children working through trauma and bereavement.

It also goes off on a thoughtful rumination on the dangers of not exposing young people to any form of darkness, with the example of an episode of Pepper Pig that was banned in Australia for suggesting that all animals can be friends, and that there is absolutely nothing to fear from spiders. It was meant to help against arachnophobia, but in a country where redbacks and funnel-webs are waiting round every corner - you really don't want to encourage children to hug one.

It's a really accessible read, and very well narrated by Mark Meadows, who is extremely listenable to. As someone who writes a lot of murder, but hesitates when swatting mosquitoes, I felt he really unearthed the truth behind what's going on there, as well as the bonding that comes with a shared love of horror with friends and family. It is a unifying thing - in a really good way. I've always loved watching really gory movies with my dad, the more realistic the better. That shared wince as the eyeball pops out of the head in Midnight Meat Train.

So, yes. Thanks Peter Laws for making me feel a little bit more normal. Or, if not normal, at peace with the kooky.

I also found it refreshing to hear about his own journey to the priesthood and his inner struggle to reconcile faith and fear. I do like the way he settled that one, it makes a lot of sense. Once Pagan, and now mostly Humanist, I've never had that dichotomy, but this was a really excellent example of how honesty and self-reflection cut across faiths to the human experience. Really nicely written.
at 21:52