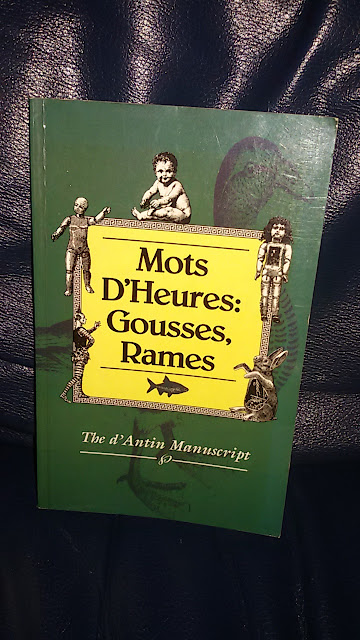 I'm not sure whether this is utter madness or complete genius. I suspect both!

I have a friend who picks up second hand books in charity shops for resale online. He cites his biggest regret as having discovered a signed first edition work of Einstein on a charity shop shelf and, unable to reconcile with his conscience, taking it to the counter to point out their mistake in pricing. He got halfway down the street and had to hold to a lamppost whilst he came to terms with what he'd done.

Every now and then he takes a chance on something he's never seen before - which is what happened here.

Originally assuming it to be a French work, closer inspection suggested something wasn't quite right. Mots D'heures: Gooses, Rams? I enquired, typing a rough approximation into Google...

The idea behind it is:

Here's an example from Wiki:

Email ThisBlogThis!Share to TwitterShare to FacebookShare to Pinterest
Labels: poetry